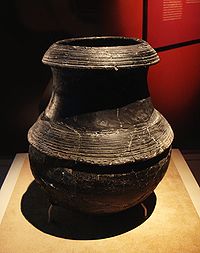 The Hemudu culture (5000 BC to 4500 BC) was a Neolithic
Neolithic
The Neolithic Age, Era, or Period, or New Stone Age, was a period in the development of human technology, beginning about 9500 BC in some parts of the Middle East, and later in other parts of the world. It is traditionally considered as the last part of the Stone Age...
culture that flourished just south of the Hangzhou Bay
Hangzhou Bay
Hangzhou Bay, or the Bay of Hangzhou , is an inlet of the East China Sea, bordered by the province of Zhejiang and the municipality of Shanghai. The Qiantang River flows into the bay.It lies south of Shanghai, and ends at the city of Hangzhou...
in Jiangnan
Jiangnan
Jiangnan or Jiang Nan is a geographic area in China referring to lands immediately to the south of the lower reaches of the Yangtze River, including the southern part of the Yangtze Delta...
in modern Yuyao
Yuyao
Yuyao is a city in Zhejiang province, China, capital of Yuyao County, Ningbo. Administratively Yuyao is under the direct jurisdiction of Ningbo....
, Zhejiang
Zhejiang
Zhejiang is an eastern coastal province of the People's Republic of China. The word Zhejiang was the old name of the Qiantang River, which passes through Hangzhou, the provincial capital...
, China
China
Chinese civilization may refer to:* China for more general discussion of the country.* Chinese culture* Greater China, the transnational community of ethnic Chinese.* History of China* Sinosphere, the area historically affected by Chinese culture...
. The site at Hemudu, 22 km north-west of Ningbo
Ningbo
Ningbo is a seaport city of northeastern Zhejiang province, Eastern China. Holding sub-provincial administrative status, the municipality has a population of 7,605,700 inhabitants at the 2010 census whom 3,089,180 in the built up area made of 6 urban districts. It lies south of the Hangzhou Bay,...
, was discovered in 1973. Hemudu sites were also discovered on the islands of Zhoushan
Zhoushan
Zhoushan or Zhoushan Archipelago New Area; formerly transliterated as Chusan, is a prefecture-level city in northeastern Zhejiang province of Eastern China. The only prefecture-level city of the People's Republic of China consisting solely of islands, it lies across the mouth of the Hangzhou Bay,...
.

The Hemudu culture co-existed with the Majiabang culture
Majiabang culture
The Majiabang culture was a Neolithic culture that existed at the mouth of the Yangtze River, primarily around the Taihu area and north of Hangzhou Bay in China. The culture was spread throughout southern Jiangsu and northern Zhejiang from around 5000 BC to 3000 BC...
as two separate and distinct cultures, with cultural transmissions between the two. Two major floods caused the nearby Yaojiang River to change its course and inundated the soil with salt
Soil salination
Soil salinity is the salt content in the soil.- Causes of soil salinity :Salt-affected soils are caused by excess accumulation of salts, typically most pronounced at the soil surface. Salts can be transported to the soil surface by capillary transport from a salt laden water table and then...
, forcing the people of Hemudu to abandon its settlements. The Hemudu people lived in long, stilt house
Stilt house
Stilt houses or pile dwellings or palafitte are houses raised on piles over the surface of the soil or a body of water. Stilt houses are built primarily as a protection against flooding, but also serve to keep out vermin...
s.

The Hemudu culture is one of the earliest cultures to cultivate rice
Rice
Rice is the seed of the monocot plants Oryza sativa or Oryza glaberrima . As a cereal grain, it is the most important staple food for a large part of the world's human population, especially in East Asia, Southeast Asia, South Asia, the Middle East, and the West Indies...
. Recent excavations at Hemudu period site of Tianluoshan has demonstrated rice was undergoing evolutionary changed recognized as domestication
Domestication
Domestication or taming is the process whereby a population of animals or plants, through a process of selection, becomes accustomed to human provision and control. In the Convention on Biological Diversity a domesticated species is defined as a 'species in which the evolutionary process has been...
. Most of the artifacts discovered at Hemudu consist of animal bones, exemplified by hoes made of shoulder bones used for cultivating rice.

The culture also produced lacquer
Lacquer
In a general sense, lacquer is a somewhat imprecise term for a clear or coloured varnish that dries by solvent evaporation and often a curing process as well that produces a hard, durable finish, in any sheen level from ultra matte to high gloss and that can be further polished as required...
wood. The remains of various plants, including water caltrop
Water caltrop
The water caltrop, water chestnut, buffalo nut, bat nut, devil pod or Singhara or Pani-fol is either of two species of the genus Trapa: Trapa natans and Trapa bicornis...
, Nelumbo nucifera
Nelumbo nucifera
Nelumbo nucifera, known by a number of names including Indian Lotus, Sacred Lotus, Bean of India, or simply Lotus, is a plant in the monogeneric family Nelumbonaceae...
, acorn
Acorn
The acorn, or oak nut, is the nut of the oaks and their close relatives . It usually contains a single seed , enclosed in a tough, leathery shell, and borne in a cup-shaped cupule. Acorns vary from 1–6 cm long and 0.8–4 cm broad...
s, melon
Melon
thumb|200px|Various types of melonsThis list of melons includes members of the plant family Cucurbitaceae with edible, fleshy fruit e.g. gourds or cucurbits. The word "melon" can refer to either the plant or specifically to the fruit...
, wild kiwi fruit, blackberries, [peach]], the foxnut or Gorgon euryale and bottle gourd
Calabash
Lagenaria siceraria , bottle gourd, opo squash or long melon is a vine grown for its fruit, which can either be harvested young and used as a vegetable, or harvested mature, dried, and used as a bottle, utensil, or pipe. For this reason, the calabash is widely known as the bottle gourd...
, were found at Hemudu and Tianlushan . The Hemudu people likely domesticated pig
Pig
A pig is any of the animals in the genus Sus, within the Suidae family of even-toed ungulates. Pigs include the domestic pig, its ancestor the wild boar, and several other wild relatives...
s, and dog
Dog
The domestic dog is a domesticated form of the gray wolf, a member of the Canidae family of the order Carnivora. The term is used for both feral and pet varieties. The dog may have been the first animal to be domesticated, and has been the most widely kept working, hunting, and companion animal in...
s but practiced extensive hunting of deer
Deer
Deer are the ruminant mammals forming the family Cervidae. Species in the Cervidae family include white-tailed deer, elk, moose, red deer, reindeer, fallow deer, roe deer and chital. Male deer of all species and female reindeer grow and shed new antlers each year...
and some wild water buffalo
Water buffalo
The water buffalo is a domesticated bovid widely kept in Asia, Europe and South America.Water buffalo can also refer to:*Wild water buffalo , the wild ancestor of the domestic water buffalo...
. Fishing was also carried out on a large scale, with a particular focus on crucian carp
Crucian carp
The crucian carp is a member of the family Cyprinidae, which includes many other fish, such as the common carp, or the smaller minnows. They inhabit lakes, ponds, and slow-moving rivers throughout Europe and Asia. The crucian is a medium-sized cyprinid, which rarely exceeds a weight of over 3.3...
. The practices of fishing and hunting are evidenced by the remains of bone harpoon
Harpoon
A harpoon is a long spear-like instrument used in fishing to catch fish or large marine mammals such as whales. It accomplishes this task by impaling the target animal, allowing the fishermen to use a rope or chain attached to the butt of the projectile to catch the animal...
s and bows and arrowheads. Music instruments, such as bone whistles and wooden drums, were also found at Hemudu.

The culture produced a thick, porous pottery
Pottery
Pottery is the material from which the potteryware is made, of which major types include earthenware, stoneware and porcelain. The place where such wares are made is also called a pottery . Pottery also refers to the art or craft of the potter or the manufacture of pottery...
. The distinct pottery was typically black and made with charcoal
Charcoal
Charcoal is the dark grey residue consisting of carbon, and any remaining ash, obtained by removing water and other volatile constituents from animal and vegetation substances. Charcoal is usually produced by slow pyrolysis, the heating of wood or other substances in the absence of oxygen...
powder. Plant and geometric designs were commonly painted onto the pottery; the pottery was sometimes also cord-marked. The culture also produced carved jade
Jade
Jade is an ornamental stone.The term jade is applied to two different metamorphic rocks that are made up of different silicate minerals:...
ornaments, carved ivory
Ivory
Ivory is a term for dentine, which constitutes the bulk of the teeth and tusks of animals, when used as a material for art or manufacturing. Ivory has been important since ancient times for making a range of items, from ivory carvings to false teeth, fans, dominoes, joint tubes, piano keys and...
artifacts and small, clay figurines.

Fossilized amoeboids and pollen suggests Hemudu culture emerged and developed in the middle of the Holocene Climatic Optimum
Holocene climatic optimum
The Holocene Climate Optimum was a warm period during roughly the interval 9,000 to 5,000 years B.P.. This event has also been known by many other names, including: Hypsithermal, Altithermal, Climatic Optimum, Holocene Optimum, Holocene Thermal Maximum, and Holocene Megathermal.This warm period...
. A study of a sea-level highstand in the Ningshao Plain from 7000 – 5000 BP shows that there may have been stabilized lower sea levels at this time followed by, from 5000 to 3900 BP, frequent flooding.