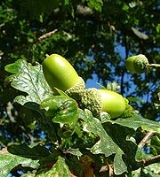 Overview
The acorn, or oak nut, is the nut
Nut (fruit)
A nut is a hard-shelled fruit of some plants having an indehiscent seed. While a wide variety of dried seeds and fruits are called nuts in English, only a certain number of them are considered by biologists to be true nuts...
of the oak
Oak
An oak is a tree or shrub in the genus Quercus , of which about 600 species exist. "Oak" may also appear in the names of species in related genera, notably Lithocarpus...
s and their close relatives (genera Quercus and Lithocarpus
Lithocarpus
Lithocarpus is a genus in the beech family Fagaceae, differing from Quercus in the erect male spikes. The World Checklist accepts 334 species, though some other texts suggest as few as 100 species. About 100 Asian species of the genus were formerly treated in the genus Pasania. All but one are...
, in the family Fagaceae
Fagaceae
The family Fagaceae, or beech family, comprises about 900 species of both evergreen and deciduous trees and shrubs, which are characterized by alternate simple leaves with pinnate venation, unisexual flowers in the form of catkins, and fruit in the form of cup-like nuts. Fagaceous leaves are often...
). It usually contains a single seed
Seed
A seed is a small embryonic plant enclosed in a covering called the seed coat, usually with some stored food. It is the product of the ripened ovule of gymnosperm and angiosperm plants which occurs after fertilization and some growth within the mother plant...
(rarely two seeds), enclosed in a tough, leathery shell, and borne in a cup-shaped cupule
Cupule
The calybium and the cupule make up the accessory fruit of flowering plants in the family Fagaceae. These two parts derive from different flower components....
. Acorns vary from 1–6 cm long and 0.8–4 cm broad. Acorns take between about 6 and 24 months (depending on the species) to mature; see List of Quercus species for details of oak classification, in which acorn morphology
Morphology (biology)
In biology, morphology is a branch of bioscience dealing with the study of the form and structure of organisms and their specific structural features....
and phenology
Phenology
Phenology is the study of periodic plant and animal life cycle events and how these are influenced by seasonal and interannual variations in climate...
are important factors.
Acorns are one of the most important wildlife foods in areas where oaks occur.

HOW MUCH ENERGY EXISTS IN A SINGLE AVERAGE OAKTREE ACORN

Can u tell me the exact chemicals in a white oak acorn in each layer?

Why do oak trees produce good crops of acorns in some years, but none in other years? This affects all the trees in an area. On the Autumn Watch mes...

What is the largest type of acorn.
More