A harpoon is a long spear
Spear
A spear is a pole weapon consisting of a shaft, usually of wood, with a pointed head.The head may be simply the sharpened end of the shaft itself, as is the case with bamboo spears, or it may be made of a more durable material fastened to the shaft, such as flint, obsidian, iron, steel or...
-like instrument used in fishing
Fishing
Fishing is the activity of trying to catch wild fish. Fish are normally caught in the wild. Techniques for catching fish include hand gathering, spearing, netting, angling and trapping....
to catch fish or large marine mammals such as whale
Whale
Whale is the common name for various marine mammals of the order Cetacea. The term whale sometimes refers to all cetaceans, but more often it excludes dolphins and porpoises, which belong to suborder Odontoceti . This suborder also includes the sperm whale, killer whale, pilot whale, and beluga...
s. It accomplishes this task by impaling the target animal, allowing the fishermen to use a rope or chain attached to the butt of the projectile
Projectile
A projectile is any object projected into space by the exertion of a force. Although a thrown baseball is technically a projectile too, the term more commonly refers to a weapon....
to catch the animal. A harpoon can also be used as a weapon
Weapon
A weapon, arm, or armament is a tool or instrument used with the aim of causing damage or harm to living beings or artificial structures or systems...
.

Spearfishing with barbed poles (harpoons) was widespread in palaeolithic times. Cosquer cave
Cosquer Cave
The Cosquer cave is located in the Calanque de Morgiou near Marseille, France, not very far from Cap Morgiou. The entrance to the cave is located 37 meters underwater, due to the rise of the Mediterranean in Paleolithic times. It was discovered by diver Henri Cosquer in 1985, but its...
in Southern France contains cave art over 16,000 years old, including drawings of seals which appear to have been harpooned. In Zaire
Zaire
The Republic of Zaire was the name of the present Democratic Republic of the Congo between 27 October 1971 and 17 May 1997. The name of Zaire derives from the , itself an adaptation of the Kongo word nzere or nzadi, or "the river that swallows all rivers".-Self-proclaimed Father of the Nation:In...
, harpoon points have been found in the Katanda region that were used to spear fish perhaps 80,000 years ago.

There are references to harpoons in ancient literature; though, in most cases, the descriptions do not go into detail. An early example from the Bible
Bible
The Bible refers to any one of the collections of the primary religious texts of Judaism and Christianity. There is no common version of the Bible, as the individual books , their contents and their order vary among denominations...
in Job
Book of Job
The Book of Job , commonly referred to simply as Job, is one of the books of the Hebrew Bible. It relates the story of Job, his trials at the hands of Satan, his discussions with friends on the origins and nature of his suffering, his challenge to God, and finally a response from God. The book is a...
41:7: Canst thou fill his skin with barbed irons? or his head with fish spears?.

The Greek historian Polybius
Polybius
Polybius , Greek ) was a Greek historian of the Hellenistic Period noted for his work, The Histories, which covered the period of 220–146 BC in detail. The work describes in part the rise of the Roman Republic and its gradual domination over Greece...
(ca 203 BC–120 BC), in his Histories
The Histories (Polybius)
Polybius’ Histories were originally written in 40 volumes, only the first five of which are existent in their entirety. The bulk of the work is passed down to us through collections of excerpts kept in libraries in Byzantium, for the most part....
, describes hunting for swordfish by using a harpoon with a barbed and detachable head. Copper harpoons were known to the seafaring Harappa
Harappa
Harappa is an archaeological site in Punjab, northeast Pakistan, about west of Sahiwal. The site takes its name from a modern village located near the former course of the Ravi River. The current village of Harappa is from the ancient site. Although modern Harappa has a train station left from...
ns well into antiquity. Early hunters in India include the Mincopie people, aboriginal inhabitants of India's Andaman and Nicobar islands, who have used harpoons with long cords for fishing since early times.

For over 8000 years, the two flue harpoon
Two flue harpoon
The two flue harpoon or two flue iron is a type of harpoon used in whaling for at least 1000 years. It appears in works of art dating back to the 14th century....
was the primary weapon used in whaling
Whaling
Whaling is the hunting of whales mainly for meat and oil. Its earliest forms date to at least 3000 BC. Various coastal communities have long histories of sustenance whaling and harvesting beached whales...
around the world, but it cut through the blubber when under stress. This flaw was corrected with the creation of the single flue harpoon; by removing one of the flues, the head of the harpoon was narrowed, making it easier for it to penetrate deep enough to hold fast. In the Arctic
Arctic
The Arctic is a region located at the northern-most part of the Earth. The Arctic consists of the Arctic Ocean and parts of Canada, Russia, Greenland, the United States, Norway, Sweden, Finland, and Iceland. The Arctic region consists of a vast, ice-covered ocean, surrounded by treeless permafrost...
, the indigenous people used the more advanced toggling harpoon
Toggling harpoon
The toggling harpoon is an ancient weapon and tool used in whaling to impale a whale when thrown. Unlike earlier harpoon versions which had only one point, a toggling harpoon has a two-part point...
design. In the early 19th century the one flue harpoon
One flue harpoon
The one flue harpoon or one flue iron is a type of harpoon used in whaling after its introduction in the early 19th century when it replaced the two flue harpoon...
was introduced, which reduced failed harpoons due to the head cutting its way out of the body of the whale. In the mid-19th century, the toggling harpoon was adapted by Lewis Temple
Lewis Temple
Lewis Temple was an American blacksmith, abolitionist, and inventor. Born in slavery in Richmond, Virginia, he moved to the whaling village of New Bedford, Massachusetts during the 1820s...
, using iron. The Temple toggle was widely used, and quickly came to dominate whaling.

In 1870, a Norwegian man named Svend Foyn
Svend Foyn
Svend Foyn was a Norwegian whaling and shipping magnate who pioneered revolutionary methods for hunting and processing whales. Svend Foyn introduced the modern harpoon gun and brought whaling into a modern age....
successfully patented and pioneered the exploding harpoon and gun based on Erik Eriksen
Erik Eriksen (explorer)
Erik Eriksen , was a Norwegian ice sea captain born in Lyngør, Norway. He later moved to Hammerfest, Norway. Eriksen was the inventor of the grenade harpoon used in modern whaling. Erik Eriksen travelled to Tønsberg with a wooden model to commercialize the harpoon with the help of Svend Foyn....
's idea and design. Together with the steam-powered whale catcher, this development ushered in the modern age of commercial whaling. Euro-American whalers were now equipped to hunt faster and more powerful species, such as the rorquals. Because rorquals sank when they died, later versions of the exploding harpoon injected air into the carcass to keep it afloat.

A certain type of explosive harpoon fired from a shoulder gun, first used by American whalemen in the mid-19th century, was called a "bomb lance." 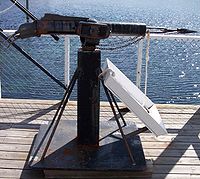 The modern whaling harpoon consists of a deck-mounted launcher (mostly a cannon
Cannon
A cannon is any piece of artillery that uses gunpowder or other usually explosive-based propellents to launch a projectile. Cannon vary in caliber, range, mobility, rate of fire, angle of fire, and firepower; different forms of cannon combine and balance these attributes in varying degrees,...
) and a projectile
Projectile
A projectile is any object projected into space by the exertion of a force. Although a thrown baseball is technically a projectile too, the term more commonly refers to a weapon....
which is a large harpoon connected to a thick rope
Rope
A rope is a length of fibres, twisted or braided together to improve strength for pulling and connecting. It has tensile strength but is too flexible to provide compressive strength...
. The spearhead is shaped in a manner which allows it to penetrate the thick layers of whale blubber and stick in the flesh. It has sharp spikes to prevent the harpoon from sliding out. Thus, by pulling the rope with a motor, the whaler
Whaler
A whaler is a specialized ship, designed for whaling, the catching and/or processing of whales. The former included the whale catcher, a steam or diesel-driven vessel with a harpoon gun mounted at its bows. The latter included such vessels as the sail or steam-driven whaleship of the 16th to early...
s can drag the whale back to their ship.

A recent development in harpoon technology is the hand-held speargun
Speargun
A speargun is an underwater fishing implement designed to fire a spear at fish.The basic components of a speargun are:A spear, a stock/barrel, and a handle/grip containing a trigger mechanism...
. Divers use the speargun for defense against dangerous marine animals. They are also used for spearing fish. Spearguns may be powered by pressurized gas or with mechanical means like springs or elastic bands.