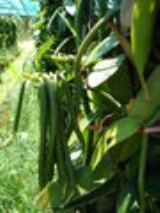 Overview
Vanillin is a phenolic aldehyde
Phenolic aldehyde
Phenolic aldehydes are a type of natural phenol. Phenolics aldehydes can be found in wines and cognacs.Examples :* Hydroxybenzaldehydes* Protocatechuic aldehyde* Vanillin and isovanillin...
, an organic compound
Organic compound
An organic compound is any member of a large class of gaseous, liquid, or solid chemical compounds whose molecules contain carbon. For historical reasons discussed below, a few types of carbon-containing compounds such as carbides, carbonates, simple oxides of carbon, and cyanides, as well as the...
with the molecular formula C8H8O3. Its functional groups include aldehyde
Aldehyde
An aldehyde is an organic compound containing a formyl group. This functional group, with the structure R-CHO, consists of a carbonyl center bonded to hydrogen and an R group....
, ether
Ether
Ethers are a class of organic compounds that contain an ether group — an oxygen atom connected to two alkyl or aryl groups — of general formula R–O–R'. A typical example is the solvent and anesthetic diethyl ether, commonly referred to simply as "ether"...
, and phenol
Phenol
Phenol, also known as carbolic acid, phenic acid, is an organic compound with the chemical formula C6H5OH. It is a white crystalline solid. The molecule consists of a phenyl , bonded to a hydroxyl group. It is produced on a large scale as a precursor to many materials and useful compounds...
. It is the primary component of the extract of the vanilla
Vanilla
Vanilla is a flavoring derived from orchids of the genus Vanilla, primarily from the Mexican species, Flat-leaved Vanilla . The word vanilla derives from the Spanish word "", little pod...
bean. It is also found in Leptotes bicolor
Leptotes bicolor
Leptotes bicolor is a species of orchid native to Paraguay and southern Brazil. It is the type species of the genus Leptotes.Its flowers and fruits are used as a substitute for vanilla in milk and ice cream....
, roasted coffee and the Chinese red pine
Chinese Red Pine
The Chinese Red Pine Pinus tabuliformis is a pine native to northern China from Liaoning west to Inner Mongolia and Gansu, and south to Shandong, Henan and Shaanxi, and also northern Korea...
. Synthetic vanillin, instead of natural vanilla extract, is sometimes used as a flavoring agent in foods, beverages, and pharmaceuticals.

Is this product also found in most trees species in the USA?

How does the Human Body use Vanillin? ...

HOW TO CONVERT LIGNIN FRON COW DUNG TO VANILLIC ACID USING MICRO ORGANISM? I NEED THE COMPLETE FLOW CHART OF THE PROCESS.

What concentrations of vanillin and vanillic acid are in natural and artificial vanilla?
More
x