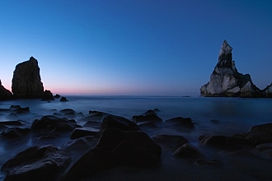 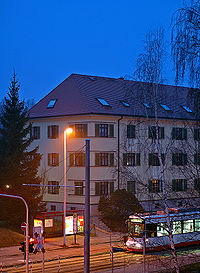 The blue hour comes from the French expression l'heure bleue, which refers to the period of twilight
Twilight
Twilight is the time between dawn and sunrise or between sunset and dusk, during which sunlight scattering in the upper atmosphere illuminates the lower atmosphere, and the surface of the earth is neither completely lit nor completely dark. The sun itself is not directly visible because it is below...
each morning and evening where there is neither full daylight
Daylight
Daylight or the light of day is the combination of all direct and indirect sunlight outdoors during the daytime. This includes direct sunlight, diffuse sky radiation, and both of these reflected from the Earth and terrestrial objects. Sunlight scattered or reflected from objects in outer space is...
nor complete darkness
Darkness
Darkness, in contrast with brightness, is a relative absence of visible light. It is the appearance of black in a color space. When light is not present, rod and cone cells within the eye are not stimulated. This lack of stimulation means photoreceptor cells are unable to distinguish color...
. The time is considered special because of the quality of the light at this time of day.


A time of innocence

The phrase is also used to refer to Paris
Paris
Paris is the capital and largest city in France, situated on the river Seine, in northern France, at the heart of the Île-de-France region...
immediately prior to World War I
World War I
World War I , which was predominantly called the World War or the Great War from its occurrence until 1939, and the First World War or World War I thereafter, was a major war centred in Europe that began on 28 July 1914 and lasted until 11 November 1918...
, which was considered to be a time of relative innocence.

As a result of the perceived specialness of this time, there are various restaurants, theatres and hotels called L'Heure Bleue located worldwide. There is also a women's perfume by Guerlain (1912) of the same name. The Norwegian rock band Madrugada (Spanish and Portuguese for "early morning") were also named after this time.

The blue hour is also a common theme in popular music and the subject appears in various songs: