Green-Wood Cemetery was founded in 1838 as a rural cemetery
Rural cemetery
The rural cemetery or garden cemetery is a style of burial ground that uses landscaping in a park-like setting.As early as 1711 the architect Sir Christopher Wren had advocated the creation of burial grounds on the outskirts of town, "inclosed with a strong Brick Wall, and having a walk round, and...
in Brooklyn
Brooklyn
Brooklyn is the most populous of New York City's five boroughs, with nearly 2.6 million residents, and the second-largest in area. Since 1896, Brooklyn has had the same boundaries as Kings County, which is now the most populous county in New York State and the second-most densely populated...
, Kings County
Kings County
-Canada:*Kings County, New Brunswick*Kings County, Nova Scotia*Kings County, Prince Edward Island and the related King's County -United States of America:*Kings County, California...
, New York. It was granted National Historic Landmark
National Historic Landmark
A National Historic Landmark is a building, site, structure, object, or district, that is officially recognized by the United States government for its historical significance...
status in 2006 by the U.S. Department of the Interior.

Located in Greenwood Heights, Brooklyn
Greenwood Heights, Brooklyn
Greenwood Heights is a neighborhood in the New York City borough of Brooklyn that takes part of its name from the neighborhood proximity to the Green-Wood Cemetery...
, it lies several blocks southwest of Prospect Park
Prospect Park (Brooklyn)
Prospect Park is a 585-acre public park in the New York City borough of Brooklyn located between Park Slope, Prospect-Lefferts Gardens, Kensington, Windsor Terrace and Flatbush Avenue, Grand Army Plaza and the Brooklyn Botanic Garden...
, between Park Slope
Park Slope, Brooklyn
Park Slope is a neighborhood in western Brooklyn, New York City's most populous borough. Park Slope is roughly bounded by Prospect Park West to the east, Fourth Avenue to the west, Flatbush Avenue to the north, and 15th Street to the south, though other definitions are sometimes offered. Generally...
, Windsor Terrace
Windsor Terrace, Brooklyn
Windsor Terrace is a neighborhood in the New York City borough of Brooklyn. It is bounded by Prospect Park to the northeast and Green-Wood Cemetery, a National Historic Landmark, to the southwest. Its southeastern boundary is Caton Avenue, while to the northwest it is bordered by Prospect Park West...
, Kensington
Kensington, Brooklyn
Kensington is a neighborhood in the center of the New York City borough of Brooklyn. It is the area south of Prospect Park and the Green-Wood Cemetery. It is bordered by Coney Island Avenue to the east, Fort Hamilton Parkway and Caton Avenue to the north, McDonald Avenue and 37th Street to the...
, and Sunset Park
Sunset Park, Brooklyn
Sunset Park is a neighborhood in the western section of the New York City borough of Brooklyn, USA. It is bounded by Greenwood Heights to the north, Borough Park to the east, Bay Ridge to the south, and Upper New York Bay to the west...
. Paul Goldberger
Paul Goldberger
Paul Goldberger is the Architecture Critic for The New Yorker, where since 1997 he has written the magazine's celebrated "Sky Line" column. He also holds the Joseph Urban Chair in Design and Architecture at The New School in New York City...
in The New York Times
The New York Times
The New York Times is an American daily newspaper founded and continuously published in New York City since 1851. The New York Times has won 106 Pulitzer Prizes, the most of any news organization...
, wrote that it was said "it is the ambition of the New Yorker to live upon the Fifth Avenue, to take his airings in the Park, and to sleep with his fathers in Green-Wood". Inspired by Mount Auburn Cemetery
Mount Auburn Cemetery
Mount Auburn Cemetery was founded in 1831 as "America's first garden cemetery", or the first "rural cemetery", with classical monuments set in a rolling landscaped terrain...
in Cambridge, Massachusetts
Cambridge, Massachusetts
Cambridge is a city in Middlesex County, Massachusetts, United States, in the Greater Boston area. It was named in honor of the University of Cambridge in England, an important center of the Puritan theology embraced by the town's founders. Cambridge is home to two of the world's most prominent...
, where a cemetery in a naturalistic park-like landscape in the English manner was first established, Green-Wood was able to take advantage of the varied topography provided by glacial moraine
Moraine
A moraine is any glacially formed accumulation of unconsolidated glacial debris which can occur in currently glaciated and formerly glaciated regions, such as those areas acted upon by a past glacial maximum. This debris may have been plucked off a valley floor as a glacier advanced or it may have...
s. Battle Hill, the highest point in Brooklyn, is on cemetery grounds, rising approximately 200 feet above sea level.

The cemetery was the idea of Henry Evelyn Pierrepont, a Brooklyn social leader. It was a popular tourist attraction in the 1850s and was the place most famous New Yorkers who died during the second half of the nineteenth century were buried. It is still an operating cemetery with approximately 600,000 graves spread out over 478 acres (1.9 km²). The rolling hills and dales, several ponds and an on-site chapel provide an environment that still draws visitors. There are several famous monuments located there, including a statue of DeWitt Clinton
DeWitt Clinton
DeWitt Clinton was an early American politician and naturalist who served as United States Senator and the sixth Governor of New York. In this last capacity he was largely responsible for the construction of the Erie Canal...
and a Civil War Memorial. During the Civil War, Green-Wood Cemetery created the "Soldiers' Lot" for free veterans' burials.

The gates were designed by Richard Upjohn
Richard Upjohn
Richard Upjohn was an English-born architect who emigrated to the United States and became most famous for his Gothic Revival churches. He was partially responsible for launching the movement to such popularity in the United States. Upjohn also did extensive work in and helped to popularize the...
in Gothic Revival style. The main entrance to the cemetery was built in 1861 of Belleville brownstone. The sculptured groups depicting biblical scenes over the gateways are the work of John M. Moffitt. A Designated Landmarks of New York plaque was erected on it in 1958 by the New York Community Trust.

Several wooden shelters were also built, including one in a Gothic Revival style, one resembling an Italian villa, and another resembling a Swiss chalet. A descendent colony of monk parakeet
Monk Parakeet
The Monk Parakeet, also known as the Quaker Parrot, is a species of parrot, in most treatments the only member of the genus Myiopsitta. It originates from the temperate to subtropical areas of Argentina and the surrounding countries in South America...
s that are believed to have escaped their containers while in transit now nests in the spires of the gate, as well as other areas in Brooklyn.

In 1999, The Green-Wood Historic Fund, a 501(c)(3) not-for-profit institution, was created to continue preservation, beautification
Beautification
Beautification is the process of making visual improvements to a person, place or thing. With regard to a town, city or to an urban area, this most often involves planting trees, shrubbery, and other greenery, but frequently also includes adding decorative or historic-style street lights and other...
, educational programs and community outreach as the current "working cemetery
Cemetery
A cemetery is a place in which dead bodies and cremated remains are buried. The term "cemetery" implies that the land is specifically designated as a burying ground. Cemeteries in the Western world are where the final ceremonies of death are observed...
" evolves into a Brooklyn
Brooklyn
Brooklyn is the most populous of New York City's five boroughs, with nearly 2.6 million residents, and the second-largest in area. Since 1896, Brooklyn has had the same boundaries as Kings County, which is now the most populous county in New York State and the second-most densely populated...
cultural institution.

The chapel was completed in 1911. It was designed by the architectural firm of Warren and Wetmore
Warren and Wetmore
Warren and Wetmore was an architecture firm in New York City. It was a partnership between Whitney Warren and Charles Wetmore , that had one of the most extensive practices of its time and was known for the designing of large hotels.Whitney Warren was a cousin of the Vanderbilts and spent ten...
, who also designed Grand Central Terminal
Grand Central Terminal
Grand Central Terminal —often incorrectly called Grand Central Station, or shortened to simply Grand Central—is a terminal station at 42nd Street and Park Avenue in Midtown Manhattan in New York City, United States...
, the Commodore Hotel
Grand Hyatt New York
The Grand Hyatt New York is a hotel located directly east of Grand Central Terminal in Midtown Manhattan, New York City. It was originally built and opened on January 28, 1919 as The Commodore Hotel, but was completely rebuilt and modernized in 1980....
, the Yale Club
Yale Club
The Yale Club may be:*The Yale Club of New York City*The Yale Club of Philadelphia*The Yale Glee Club*The Yale Corinthian Yacht Club...
and many other buildings. The architecture of the chapel is a reduced version of Christopher Wren
Christopher Wren
Sir Christopher Wren FRS is one of the most highly acclaimed English architects in history.He used to be accorded responsibility for rebuilding 51 churches in the City of London after the Great Fire in 1666, including his masterpiece, St. Paul's Cathedral, on Ludgate Hill, completed in 1710...
's Thomas Tower at Christ Church College in Oxford
Oxford
The city of Oxford is the county town of Oxfordshire, England. The city, made prominent by its medieval university, has a population of just under 165,000, with 153,900 living within the district boundary. It lies about 50 miles north-west of London. The rivers Cherwell and Thames run through...
. The chapel was restored in 2001. 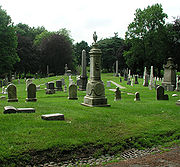 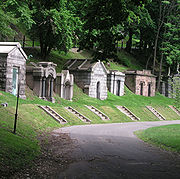