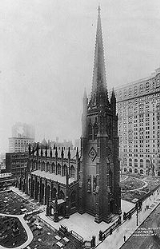 Richard Upjohn was an English
England
England is a country that is part of the United Kingdom. It shares land borders with Scotland to the north and Wales to the west; the Irish Sea is to the north west, the Celtic Sea to the south west, with the North Sea to the east and the English Channel to the south separating it from continental...
-born architect
Architect
An architect is a person trained in the planning, design and oversight of the construction of buildings. To practice architecture means to offer or render services in connection with the design and construction of a building, or group of buildings and the space within the site surrounding the...
who emigrated to the United States
United States
The United States of America is a federal constitutional republic comprising fifty states and a federal district...
and became most famous for his Gothic Revival churches. He was partially responsible for launching the movement to such popularity in the United States. Upjohn also did extensive work in and helped to popularize the Italianate
Italianate architecture
The Italianate style of architecture was a distinct 19th-century phase in the history of Classical architecture. In the Italianate style, the models and architectural vocabulary of 16th-century Italian Renaissance architecture, which had served as inspiration for both Palladianism and...
style. He was a founder and the first president of the American Institute of Architects
American Institute of Architects
The American Institute of Architects is a professional organization for architects in the United States. Headquartered in Washington, D.C., the AIA offers education, government advocacy, community redevelopment, and public outreach to support the architecture profession and improve its public image...
. His son, Richard Mitchell Upjohn
Richard M. Upjohn
Richard Michell Upjohn, FAIA, was an influential American architect, co-founder and president of the American Institute of Architects.-Early life and career:...
was also a well-known architect and served as a partner in his architectural firm in New York
New York
New York is a state in the Northeastern region of the United States. It is the nation's third most populous state. New York is bordered by New Jersey and Pennsylvania to the south, and by Connecticut, Massachusetts and Vermont to the east...
.

Richard Upjohn was born in Shaftesbury
Shaftesbury
Shaftesbury is a town in Dorset, England, situated on the A30 road near the Wiltshire border 20 miles west of Salisbury. The town is built 718 feet above sea level on the side of a chalk and greensand hill, which is part of Cranborne Chase, the only significant hilltop settlement in Dorset...
, England, where he was apprenticed to a builder and cabinet-maker. He eventually became a master-mechanic. He and his family emigrated to the United States in 1829. They initially settled in New Bedford, Massachusetts
New Bedford, Massachusetts
New Bedford is a city in Bristol County, Massachusetts, United States, located south of Boston, southeast of Providence, Rhode Island, and about east of Fall River. As of the 2010 census, the city had a total population of 95,072, making it the sixth-largest city in Massachusetts...
and then moved on to Boston
Boston
Boston is the capital of and largest city in Massachusetts, and is one of the oldest cities in the United States. The largest city in New England, Boston is regarded as the unofficial "Capital of New England" for its economic and cultural impact on the entire New England region. The city proper had...
in 1833, where he worked in architectural design. He became a naturalized
Naturalization
Naturalization is the acquisition of citizenship and nationality by somebody who was not a citizen of that country at the time of birth....
citizen of the United States
Citizenship in the United States
Citizenship in the United States is a status given to individuals that entails specific rights, duties, privileges, and benefits between the United States and the individual...
in 1836. His first major project was for entrances to Boston Common
Boston Common
Boston Common is a central public park in Boston, Massachusetts. It is sometimes erroneously referred to as the "Boston Commons". Dating from 1634, it is the oldest city park in the United States. The Boston Common consists of of land bounded by Tremont Street, Park Street, Beacon Street,...
and his first church would be St. John's Episcopal Church in Bangor, Maine
Bangor, Maine
Bangor is a city in and the county seat of Penobscot County, Maine, United States, and the major commercial and cultural center for eastern and northern Maine...
. He had relocated to New York by 1839 where he worked on alterations to Trinity Church. The alterations were later abandoned and he was commissioned to design a new church, completed in 1846. He published his extremely influential book, Upjohn's rural architecture: Designs, working drawings and specifications for a wooden church, and other rural structures, in 1852. The designs in this publication were widely used across the country by builders, with many examples remaining.

Upjohn, along with 13 other architects, co-founded the American Institute of Architects
American Institute of Architects
The American Institute of Architects is a professional organization for architects in the United States. Headquartered in Washington, D.C., the AIA offers education, government advocacy, community redevelopment, and public outreach to support the architecture profession and improve its public image...
on February 23, 1857. He served as president of that organization from 1857 to 1876, being succeeded by Thomas Ustick Walter
Thomas U. Walter
Thomas Ustick Walter of Philadelphia, Pennsylvania was an American architect, the dean of American architecture between the 1820 death of Benjamin Latrobe and the emergence of H.H. Richardson in the 1870s...
. He went on the design many buildings in a variety of styles. He died at his home in Garrison, New York
Garrison, New York
Garrison is a hamlet in Putnam County, New York, United States. It is part of the town of Philipstown and is on the east side of the Hudson River, across from the United States Military Academy at West Point...
in 1878. Architectural drawings and papers by Upjohn and other family members are held by the Drawings and Archives Department of Avery Architectural and Fine Arts Library
Avery Architectural and Fine Arts Library
The Avery Architectural and Fine Arts Library is one of twenty-five libraries in the Columbia University Library System and is located in Avery Hall on the Morningside Heights campus of Columbia University in the City of New York. It is the largest architecture library in the world...
at Columbia University
Columbia University
Columbia University in the City of New York is a private, Ivy League university in Manhattan, New York City. Columbia is the oldest institution of higher learning in the state of New York, the fifth oldest in the United States, and one of the country's nine Colonial Colleges founded before the...
, New York Public Library
New York Public Library
The New York Public Library is the largest public library in North America and is one of the United States' most significant research libraries...
's Humanities and Social Sciences Library, Manuscripts and Archives division, and by the Library of Congress Prints & Photographs Division.

Upjohn is honored together with Ralph Adams Cram
Ralph Adams Cram
Ralph Adams Cram FAIA, , was a prolific and influential American architect of collegiate and ecclesiastical buildings, often in the Gothic style. Cram & Ferguson and Cram, Goodhue & Ferguson are partnerships in which he worked.-Early life:Cram was born on December 16, 1863 at Hampton Falls, New...
and John LaFarge
John LaFarge
John La Farge was an American painter, muralist, stained glass window maker, decorator, and writer.-Biography:...
with a feast day on the liturgical calendar of the Episcopal Church (USA)
Calendar of saints (Episcopal Church in the United States of America)
The veneration of saints in the Episcopal Church is a continuation of an ancient tradition from the early Church which honors important people of the Christian faith. The usage of the term "saint" is similar to Roman Catholic and Orthodox traditions. Those in the Anglo-Catholic tradition may...
on December 16.