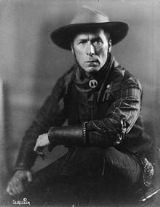 Encyclopedia
William Surrey Hart was an American silent film
Silent film
A silent film is a film with no synchronized recorded sound, especially with no spoken dialogue. In silent films for entertainment the dialogue is transmitted through muted gestures, pantomime and title cards...
actor, screenwriter
Screenwriter
Screenwriters or scriptwriters or scenario writers are people who write/create the short or feature-length screenplays from which mass media such as films, television programs, Comics or video games are based.-Profession:...
, director
Film director
A film director is a person who directs the actors and film crew in filmmaking. They control a film's artistic and dramatic nathan roach, while guiding the technical crew and actors.-Responsibilities:...
and producer
Film producer
A film producer oversees and delivers a film project to all relevant parties while preserving the integrity, voice and vision of the film. They will also often take on some financial risk by using their own money, especially during the pre-production period, before a film is fully financed.The...
. He is remembered for having "imbued all of his characters with honor and integrity."

Hart was born in Newburgh, New York
Newburgh (town), New York
Newburgh is a town in Orange County, New York, United States. The 2010 census determined the population is 29,801. This is the first time ever that the population of the Town of Newburgh officially exceeded that of the adjacent but totally separate municipality known as the city of Newburgh...
; to James Howard Hart (1829–1902) and Katherine Diédricht Hart (1833–1909). William had 2 brothers and 4 sisters. His father was of Irish
Ireland
Ireland is an island to the northwest of continental Europe. It is the third-largest island in Europe and the twentieth-largest island on Earth...
ancestry, and his mother was of German
Germany
Germany , officially the Federal Republic of Germany , is a federal parliamentary republic in Europe. The country consists of 16 states while the capital and largest city is Berlin. Germany covers an area of 357,021 km2 and has a largely temperate seasonal climate...
heritage. In his twenties, Hart began his acting career on stage and would not consider acting in movies until he was 49 years of age. He toured and traveled extensively while trying to make a name for himself as an actor, and for a time coached shows at the Asheville Opera House around year 1900. His family had moved to Asheville but after his youngest sister Lotta died of typhoid fever they all left together for Brooklyn
Brooklyn
Brooklyn is the most populous of New York City's five boroughs, with nearly 2.6 million residents, and the second-largest in area. Since 1896, Brooklyn has had the same boundaries as Kings County, which is now the most populous county in New York State and the second-most densely populated...
until William went back on tour.

A successful Shakespearean
William Shakespeare
William Shakespeare was an English poet and playwright, widely regarded as the greatest writer in the English language and the world's pre-eminent dramatist. He is often called England's national poet and the "Bard of Avon"...
actor on Broadway
Broadway theatre
Broadway theatre, commonly called simply Broadway, refers to theatrical performances presented in one of the 40 professional theatres with 500 or more seats located in the Theatre District centered along Broadway, and in Lincoln Center, in Manhattan in New York City...
who had worked with Margaret Mather
Margaret Mather
Margaret Mather was a Canadian actress.She was born in poverty in Tilbury, Ontario as Margaret Finlayson, daughter of John Finlayson, a farmer and mechanic, and Ann Mather...
and other stars, he appeared in the original 1899 stage production of Ben-Hur
Ben-Hur (play)
Ben Hur was an 1899 dramatization of the 1880 novel Ben Hur: A Tale of the Christ by Lew Wallace. It was dramatized by William W. Young and produced by Marc Klaw and A. L. Erlanger. Inspired by the popular equestrian dramas of nineteenth century London, the production was notable for its elaborate...
.

Hart went on to become one of the first great stars of the motion picture western
Western (genre)
The Western is a genre of various visual arts, such as film, television, radio, literature, painting and others. Westerns are devoted to telling stories set primarily in the latter half of the 19th century in the American Old West, hence the name. Some Westerns are set as early as the Battle of...
. Fascinated by the Old West, he acquired Billy the Kid
Billy the Kid
William H. Bonney William H. Bonney William H. Bonney (born William Henry McCarty, Jr. est. November 23, 1859 – c. July 14, 1881, better known as Billy the Kid but also known as Henry Antrim, was a 19th-century American gunman who participated in the Lincoln County War and became a frontier...
's "six shooters"
Revolver
A revolver is a repeating firearm that has a cylinder containing multiple chambers and at least one barrel for firing. The first revolver ever made was built by Elisha Collier in 1818. The percussion cap revolver was invented by Samuel Colt in 1836. This weapon became known as the Colt Paterson...
and was a friend of legendary lawmen Wyatt Earp
Wyatt Earp
Wyatt Berry Stapp Earp was an American gambler, investor, and law enforcement officer who served in several Western frontier towns. He was also at different times a farmer, teamster, bouncer, saloon-keeper, miner and boxing referee. However, he was never a drover or cowboy. He is most well known...
and Bat Masterson
Bat Masterson
William Barclay "Bat" Masterson was a figure of the American Old West known as a buffalo hunter, U.S. Marshal and Army scout, avid fisherman, gambler, frontier lawman, and sports editor and columnist for the New York Morning Telegraph...
. He entered films in 1914 where, after playing supporting roles in two short films, he achieved stardom as the lead in the feature The Bargain
The Bargain
The Bargain is a 1914 Western film starring William S. Hart. It was the first Western starring Hart, who would go on to become the most popular Western actor of the silent film era. In 2010, it was added to the United States National Film Registry, where it joined another Hart Western, 1916's...
. Hart was particularly interested in making realistic western films. His films are noted for their authentic costumes and props
Theatrical property
A theatrical property, commonly referred to as a prop, is an object used on stage by actors to further the plot or story line of a theatrical production. Smaller props are referred to as "hand props". Larger props may also be set decoration, such as a chair or table. The difference between a set...
, as well as Hart's extraordinary acting ability, honed on Shakespearean theater stages in the United States and England.

Beginning in 1915, Hart starred in his own series of two-reel western short subjects for producer Thomas Ince
Thomas H. Ince
Thomas Harper Ince was an American silent film actor, director, screenwriter and producer of more than 100 films and pioneering studio mogul. Known as the "Father of the Western", he invented many mechanisms of professional movie production, introducing early Hollywood to the "assembly line"...
, which were so popular that they were supplanted by a series of feature films. Many of Hart's early films continued to play in theaters, under new titles, for another decade. In 1917 Hart accepted a lucrative offer from Adolph Zukor
Adolph Zukor
Adolph Zukor , born Adolph Cukor, was a film mogul and founder of Paramount Pictures.-Early life:...
to join Famous Players-Lasky, which merged into Paramount Pictures
Paramount Pictures
Paramount Pictures Corporation is an American film production and distribution company, located at 5555 Melrose Avenue in Hollywood. Founded in 1912 and currently owned by media conglomerate Viacom, it is America's oldest existing film studio; it is also the last major film studio still...
. In the films Hart began to ride a brown and white pinto
Pinto horse
A pinto horse has a coat color that consists of large patches of white and any other color. The distinction between "pinto" and "solid" can be tenuous, as so-called "solid" horses frequently have areas of white hair. Various cultures throughout history appear to have selectively bred for pinto...
he called Fritz. Fritz was the forerunner of later famous movie horses known by their own name, i.e., horses like Tom Mix's Tony, Roy Rogers's Trigger
Trigger (horse)
Trigger was a palomino horse, made famous in American Western films with his owner/rider, cowboy star Roy Rogers.-Pedigree:...
and Clayton Moore's Silver, etc. Hart was now making feature films exclusively, and films like Square Deal Sanderson and The Toll Gate were popular with fans. Hart married young Hollywood actress Winifred Westover. Although their marriage was short-lived, they had one child, William S. Hart, Jr.(1922–2004).

By the early 1920s, however, Hart's brand of gritty, rugged westerns with drab costumes and moralistic themes gradually fell out of fashion. The public became attracted by a new kind of movie cowboy, epitomized by Tom Mix
Tom Mix
Thomas Edwin "Tom" Mix was an American film actor and the star of many early Western movies. He made a reported 336 films between 1910 and 1935, all but nine of which were silent features...
, who wore flashier costumes and was faster with the action. Paramount dropped Hart, who then made one last bid for his kind of western. He produced Tumbleweeds
Tumbleweeds (1925 film)
Tumbleweeds is a 1925 American Western film starring and produced by William S. Hart. It depicts the Cherokee Strip land rush of 1893. The film is said to have influenced the Oscar-winning 1931 Western Cimarron, which also depicts the land rush...
(1925) with his own money, arranging to release it independently through United Artists
United Artists
United Artists Corporation is an American film studio. The original studio of that name was founded in 1919 by D. W. Griffith, Charles Chaplin, Mary Pickford and Douglas Fairbanks....
. The film turned out well, with an epic land-rush sequence, but did only fair business at the box office. Hart was angered by United Artists' failure to promote his film properly and sued United Artists. The legal proceedings dragged on for years, and the courts finally ruled in Hart's favor, in 1940.

For his contribution to the motion picture industry, William S. Hart has a star on the Hollywood Walk of Fame
Hollywood Walk of Fame
The Hollywood Walk of Fame consists of more than 2,400 five-pointed terrazzo and brass stars embedded in the sidewalks along fifteen blocks of Hollywood Boulevard and three blocks of Vine Street in Hollywood, California...
at 6363 Hollywood Blvd. In 1975, he was inducted into the Western Performers Hall of Fame at the National Cowboy & Western Heritage Museum
National Cowboy & Western Heritage Museum
The National Cowboy & Western Heritage Museum is a museum in Oklahoma City, Oklahoma, with more than 28,000 Western and American Indian art works and artifacts. The facility also has the world's most extensive collection of American rodeo, photographs, barbed wire, saddlery, and early rodeo trophies...
in Oklahoma City, Oklahoma
Oklahoma City, Oklahoma
Oklahoma City is the capital and the largest city in the state of Oklahoma. The county seat of Oklahoma County, the city ranks 31st among United States cities in population. The city's population, from the 2010 census, was 579,999, with a metro-area population of 1,252,987 . In 2010, the Oklahoma...
.