Encyclopedia
Greeks
Greeks
The Greeks, also known as the Hellenes , are a nation and ethnic group native to Greece, Cyprus and neighboring regions. They also form a significant diaspora, with Greek communities established around the world....
are the seventh-largest ethnic group in Australia
Australia
Australia , officially the Commonwealth of Australia, is a country in the Southern Hemisphere comprising the mainland of the Australian continent, the island of Tasmania, and numerous smaller islands in the Indian and Pacific Oceans. It is the world's sixth-largest country by total area...
, after those declaring their ancestry simply as "Australian". In the 2006 census
Census
A census is the procedure of systematically acquiring and recording information about the members of a given population. It is a regularly occurring and official count of a particular population. The term is used mostly in connection with national population and housing censuses; other common...
, 365,147 persons declared having Greek ancestry, either alone or in conjunction with another ethnicity.
The 2006 census recorded 97,218 people of Greek ancestry born in Greece
Greece
Greece , officially the Hellenic Republic , and historically Hellas or the Republic of Greece in English, is a country in southeastern Europe....
and 18,381 in Cyprus
Cyprus
Cyprus , officially the Republic of Cyprus , is a Eurasian island country, member of the European Union, in the Eastern Mediterranean, east of Greece, south of Turkey, west of Syria and north of Egypt. It is the third largest island in the Mediterranean Sea.The earliest known human activity on the...
, though it is uncertain how many of the latter are Greek Cypriots
Greek Cypriots
Greek Cypriots are the ethnic Greek population of Cyprus, forming the island's largest ethnolinguistic community at 77% of the population. Greek Cypriots are mostly members of the Church of Cyprus, an autocephalous Greek Orthodox Church within the wider communion of Orthodox Christianity...
.

The first Greek migrants to Australia were seven convict
Convict
A convict is "a person found guilty of a crime and sentenced by a court" or "a person serving a sentence in prison", sometimes referred to in slang as simply a "con". Convicts are often called prisoners or inmates. Persons convicted and sentenced to non-custodial sentences often are not termed...
sailors convicted of piracy by a British naval court in 1829 and sent to serve out their terms in New South Wales
New South Wales
New South Wales is a state of :Australia, located in the east of the country. It is bordered by Queensland, Victoria and South Australia to the north, south and west respectively. To the east, the state is bordered by the Tasman Sea, which forms part of the Pacific Ocean. New South Wales...
. Though eventually pardoned, two of the seven settled in the country. The first known free Greek immigrant to Australia was Katerina Georgia Plessos (1809–1907), who arrived in Sydney
Sydney
Sydney is the most populous city in Australia and the state capital of New South Wales. Sydney is located on Australia's south-east coast of the Tasman Sea. As of June 2010, the greater metropolitan area had an approximate population of 4.6 million people...
with her husband Major James Crummer in 1835. They married in 1827 on the island of Kalamos where Crummer, the island's commandant met the young refugee from the Greek independence
Greek War of Independence
The Greek War of Independence, also known as the Greek Revolution was a successful war of independence waged by the Greek revolutionaries between...
wars. She is thought to be one of the last people to speak to Lord Byron. They lived in Sydney, Newcastle and Port Macquarie where she is buried. They had 11 children. The first free Greek settler to South Australia was George Tramountanas who arrived in Pt. Adelaide in 1842. He was a Pastoralist on the West Coast of South Australia and eventually became a well-respected sheep farmer and prominent member of the Elliston District. He is revered by the Greek Orthodox Community of South Australia as their Pioneering Grandfather. Groups of Greeks then settled in significant numbers during the gold rushes of the 1850s.

The 1901 census recorded 878 Greek-born, but this must surely omit a few hundred other ethnic Greek migrants from the Ottoman Empire
Ottoman Empire
The Ottoman EmpireIt was usually referred to as the "Ottoman Empire", the "Turkish Empire", the "Ottoman Caliphate" or more commonly "Turkey" by its contemporaries...
and elsewhere. The expulsion of Greeks from Asia Minor
Asia Minor
Asia Minor is a geographical location at the westernmost protrusion of Asia, also called Anatolia, and corresponds to the western two thirds of the Asian part of Turkey...
in 1922-23 led to further Greek migration to Australia, primarily to New South Wales
New South Wales
New South Wales is a state of :Australia, located in the east of the country. It is bordered by Queensland, Victoria and South Australia to the north, south and west respectively. To the east, the state is bordered by the Tasman Sea, which forms part of the Pacific Ocean. New South Wales...
. These Greeks are difficult to trace but the number of Greeks from Greece proper had risen to 12,291 by the time of the 1947 census. 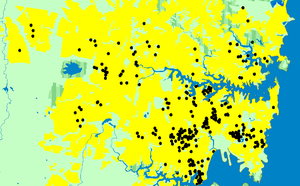 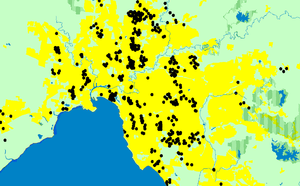 Greeks – alongside Italians – were one of the main groups targeted by Australian Government migration schemes in the 1950s and 1960s. By 1971 there were 160,200 Greek-born persons in Australia, and smaller numbers from Cyprus and Egypt. Today, just under half of the Greek-born (49.6%) live in Victoria
Victoria (Australia)
Victoria is the second most populous state in Australia. Geographically the smallest mainland state, Victoria is bordered by New South Wales, South Australia, and Tasmania on Boundary Islet to the north, west and south respectively....
, with a further third in New South Wales
New South Wales
New South Wales is a state of :Australia, located in the east of the country. It is bordered by Queensland, Victoria and South Australia to the north, south and west respectively. To the east, the state is bordered by the Tasman Sea, which forms part of the Pacific Ocean. New South Wales...
(31.7%). In comparison, only 24.7% of Australians as a whole live in Victoria, underlining the density of the Greek presence there.

Melbourne
Melbourne
Melbourne is the capital and most populous city in the state of Victoria, and the second most populous city in Australia. The Melbourne City Centre is the hub of the greater metropolitan area and the Census statistical division—of which "Melbourne" is the common name. As of June 2009, the greater...
has been known as one of the largest Greek cities in the world, although it is difficult to confirm this fact given the different methods countries use to conceptualise and measure people of particular backgrounds. In 2006, 149,195 persons in the Melbourne Statistical District claimed Greek ancestry, either alone or in combination with another ancestry. Four Greek cities had larger populations in 2007. In addition 224,500 persons reside in the Greek part of Nicosia
Nicosia
Nicosia from , known locally as Lefkosia , is the capital and largest city in Cyprus, as well as its main business center. Nicosia is the only divided capital in the world, with the southern and the northern portions divided by a Green Line...
, and 159,763 Greek American
Greek American
Greek Americans are Americans of Greek descent also described as Hellenic descent. According to the 2007 U.S. Census Bureau estimation, there were 1,380,088 people of Greek ancestry in the United States, while the State Department mentions that around 3,000,000 Americans claim to be of Greek descent...
s reside in New York State.

In 2006, the Greek language
Greek language
Greek is an independent branch of the Indo-European family of languages. Native to the southern Balkans, it has the longest documented history of any Indo-European language, spanning 34 centuries of written records. Its writing system has been the Greek alphabet for the majority of its history;...
was spoken at home by 252,222 Australian residents, a 4.125% decrease from the 2001 census data. Greek is the fourth most commonly spoken language in Australia after English, Chinese and Italian.