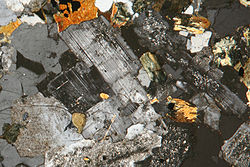 On average the upper continental crust has the same composition as granodiorite.

Granodiorite is a plutonic igneous rock, formed by an intrusion
Intrusion
An intrusion is liquid rock that forms under Earth's surface. Magma from under the surface is slowly pushed up from deep within the earth into any cracks or spaces it can find, sometimes pushing existing country rock out of the way, a process that can take millions of years. As the rock slowly...
of silica-rich magma
Magma
Magma is a mixture of molten rock, volatiles and solids that is found beneath the surface of the Earth, and is expected to exist on other terrestrial planets. Besides molten rock, magma may also contain suspended crystals and dissolved gas and sometimes also gas bubbles. Magma often collects in...
, which cools in batholiths or stocks below the Earth's surface. It is usually only exposed at the surface after uplift
Tectonic uplift
Tectonic uplift is a geological process most often caused by plate tectonics which increases elevation. The opposite of uplift is subsidence, which results in a decrease in elevation. Uplift may be orogenic or isostatic.-Orogenic uplift:...
and erosion
Erosion
Erosion is when materials are removed from the surface and changed into something else. It only works by hydraulic actions and transport of solids in the natural environment, and leads to the deposition of these materials elsewhere...
have occurred. The volcanic equivalent of granodiorite is dacite
Dacite
Dacite is an igneous, volcanic rock. It has an aphanitic to porphyritic texture and is intermediate in composition between andesite and rhyolite. The relative proportions of feldspars and quartz in dacite, and in many other volcanic rocks, are illustrated in the QAPF diagram...
.

The Rosetta Stone
Rosetta Stone
The Rosetta Stone is an ancient Egyptian granodiorite stele inscribed with a decree issued at Memphis in 196 BC on behalf of King Ptolemy V. The decree appears in three scripts: the upper text is Ancient Egyptian hieroglyphs, the middle portion Demotic script, and the lowest Ancient Greek...
was carved out of granodiorite, and Plymouth Rock
Plymouth Rock
Plymouth Rock is the traditional site of disembarkation of William Bradford and the Mayflower Pilgrims who founded Plymouth Colony in 1620. It is an important symbol in American history...
was a glacial erratic
Glacial erratic
A glacial erratic is a piece of rock that differs from the size and type of rock native to the area in which it rests. "Erratics" take their name from the Latin word errare, and are carried by glacial ice, often over distances of hundreds of kilometres...
boulder of granodiorite.

The name comes from two related rocks
Rock (geology)
In geology, rock or stone is a naturally occurring solid aggregate of minerals and/or mineraloids.The Earth's outer solid layer, the lithosphere, is made of rock. In general rocks are of three types, namely, igneous, sedimentary, and metamorphic...
: granite
Granite
Granite is a common and widely occurring type of intrusive, felsic, igneous rock. Granite usually has a medium- to coarse-grained texture. Occasionally some individual crystals are larger than the groundmass, in which case the texture is known as porphyritic. A granitic rock with a porphyritic...
and diorite
Diorite
Diorite is a grey to dark grey intermediate intrusive igneous rock composed principally of plagioclase feldspar , biotite, hornblende, and/or pyroxene. It may contain small amounts of quartz, microcline and olivine. Zircon, apatite, sphene, magnetite, ilmenite and sulfides occur as accessory...
. The grano- root comes from the Latin
Latin
Latin is an Italic language originally spoken in Latium and Ancient Rome. It, along with most European languages, is a descendant of the ancient Proto-Indo-European language. Although it is considered a dead language, a number of scholars and members of the Christian clergy speak it fluently, and...
for 'grain
GRAIN
GRAIN is a small international non-profit organisation that works to support small farmers and social movements in their struggles for community-controlled and biodiversity-based food systems. Our support takes the form of independent research and analysis, networking at local, regional and...
', an English language
English language
English is a West Germanic language that arose in the Anglo-Saxon kingdoms of England and spread into what was to become south-east Scotland under the influence of the Anglian medieval kingdom of Northumbria...
cognate
Cognate
In linguistics, cognates are words that have a common etymological origin. This learned term derives from the Latin cognatus . Cognates within the same language are called doublets. Strictly speaking, loanwords from another language are usually not meant by the term, e.g...
.
The source of this article is wikipedia, the free encyclopedia.  The text of this article is licensed under the GFDL.