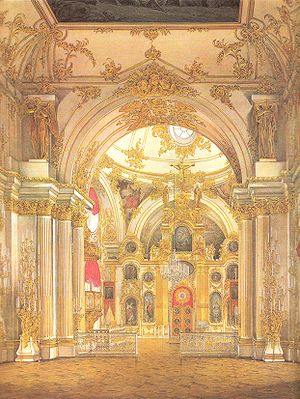 The Grand Church of the Winter Palace in Saint Petersburg
Saint Petersburg
Saint Petersburg is a city and a federal subject of Russia located on the Neva River at the head of the Gulf of Finland on the Baltic Sea...
, sometimes referred to as the Winter Palace
Winter Palace
The Winter Palace in Saint Petersburg, Russia, was, from 1732 to 1917, the official residence of the Russian monarchs. Situated between the Palace Embankment and the Palace Square, adjacent to the site of Peter the Great's original Winter Palace, the present and fourth Winter Palace was built and...
's cathedral
Cathedral
A cathedral is a Christian church that contains the seat of a bishop...
, was consecrated
Consecration
Consecration is the solemn dedication to a special purpose or service, usually religious. The word "consecration" literally means "to associate with the sacred". Persons, places, or things can be consecrated, and the term is used in various ways by different groups...
in 1763. It is located on the piano nobile
Piano nobile
The piano nobile is the principal floor of a large house, usually built in one of the styles of classical renaissance architecture...
in the eastern wing of the Winter Palace, and is the larger, and principal, of two churches within the Palace. A smaller, more private church was constructed in 1768, near the private apartment in the northwest part of the wing. The Grand Church was designed by Francesco Rastrelli
Francesco Bartolomeo Rastrelli
Francesco Bartolomeo Rastrelli was an Italian architect naturalized Russian. He developed an easily recognizable style of Late Baroque, both sumptuous and majestic...
, and has been described as "one of the most splendid rooms" in the Palace. Today, the church is an unconsecrated exhibition hall of the State Hermitage Museum.

Construction of the church began on 14 October 1753 (Julian calendar
Julian calendar
The Julian calendar began in 45 BC as a reform of the Roman calendar by Julius Caesar. It was chosen after consultation with the astronomer Sosigenes of Alexandria and was probably designed to approximate the tropical year .The Julian calendar has a regular year of 365 days divided into 12 months...
). Six years later, the interior design was executed by the Italian artists Carlo Zucci, Francesco Martini, Giovanni Antonio Veneroni and the sculptor J.B. Jani. Rastrelli was personally in charge of the three-tier iconostasis
Iconostasis
In Eastern Christianity an iconostasis is a wall of icons and religious paintings, separating the nave from the sanctuary in a church. Iconostasis also refers to a portable icon stand that can be placed anywhere within a church...
where the icons were painted by Ivan Belsky
Ivan Belsky
Ivan Belsky may refer to:* Ivan Vladimirovich Belsky , first prince of the Gediminid Belsky family* Ivan Feodorovich Belsky Ivan Belsky may refer to:* Ivan Vladimirovich Belsky (fl. 1422–1445), first prince of the Gediminid Belsky family* Ivan Feodorovich Belsky Ivan Belsky may refer to:* Ivan...
with brothers and Ivan Vishnyakov
Ivan Vishnyakov
Ivan Yakovlevich Vishnyakov was a Russian painter.Vishnyakov was born in Moscow. He was a pupil of Louis Caravaque, a French artist, who worked in Russia. Vishnyakov worked in the painting department of the Ministry of Construction, and painted primarily portraits at that time...
. The Italian Francesco Fontebasso
Francesco Fontebasso
Francesco Fontebasso was an Italian painter painter of the late-Baroque or Rococo period of Venice. He first apprenticed with Sebastiano Ricci, but was strongly influenced by his contemporary, Giovanni Battista Tiepolo. In 1761, Fontebasso visited Saint Petersburg and produced ceiling paintings...
painted the evangelist
Four Evangelists
In Christian tradition the Four Evangelists are Matthew, Mark, Luke, and John, the authors attributed with the creation of the four Gospel accounts in the New Testament that bear the following titles:*Gospel according to Matthew*Gospel according to Mark...
s in the church's spandrel
Spandrel
A spandrel, less often spandril or splaundrel, is the space between two arches or between an arch and a rectangular enclosure....
s and the "Resurrection of Christ" plafond
Plafond
Plafond , in a broad sense, is any ceiling of any premise.Plafond can be product of monumental and decorative painting and sculpture; subject or ornamental – also is designated by the term "Plafond"...
in the vestibule
Vestibule (architecture)
A vestibule is a lobby, entrance hall, or passage between the entrance and the interior of a building.The same term can apply to structures in modern or ancient roman architecture. In modern architecture vestibule typically refers to a small room or hall between an entrance and the interior of...
.

The Grand Church was one of the final parts of the palace to be completed. When the Palace was first inhabited on 6 April 1762, the cathedral was not yet completed, so a temporary church of the Resurrection of Christ was consecrated by Archbishop
Archbishop of Novgorod
The Archbishop of Novgorod is the head of the eparchy of Novgorod the Great and is one of the oldest offices in the Russian Orthodox Church. The archbishops have, in fact, been among the most important figures in medieval Russian history and culture and their successors continued to play...
Dimitry Sechenov of Novgorod.

On 12 July 1763, Archbishop Gavriil Kremenetsky of St Petersburg consecrated the Grand Church in the name of the Not-Made-by-Hand Image of Our Saviour
Image of Edessa
According to Christian legend, the Image of Edessa was a holy relic consisting of a square or rectangle of cloth upon which a miraculous image of the face of Jesus was imprinted — the first icon ....
. This eponymous icon, painted by Feodot Ukhtomsky in 1693, lavishly decorated with gold and diamonds, was placed near the sanctuary
Sanctuary
A sanctuary is any place of safety. They may be categorized into human and non-human .- Religious sanctuary :A religious sanctuary can be a sacred place , or a consecrated area of a church or temple around its tabernacle or altar.- Sanctuary as a sacred place :#Sanctuary as a sacred place:#:In...
.


Architecture of the Grand Church 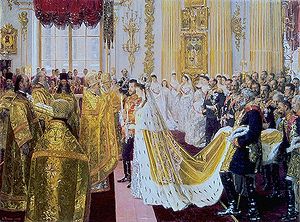 The Grand Church and the Palace's Jordan Staircase are one of the few parts of the palace to retain the original rococo
Rococo
Rococo , also referred to as "Late Baroque", is an 18th-century style which developed as Baroque artists gave up their symmetry and became increasingly ornate, florid, and playful...
decorative scheme devised by Francesco Bartolomeo Rastrelli
Francesco Bartolomeo Rastrelli
Francesco Bartolomeo Rastrelli was an Italian architect naturalized Russian. He developed an easily recognizable style of Late Baroque, both sumptuous and majestic...
. This was faithfully copied by Vasily Stasov
Vasily Stasov
Vasily Petrovich Stasov was a Russian architect.-Biography:Stasov was born in Moscow....
when he was commissioned to rebuild the palace following the disastrous fire that destroyed most of the original palace interiors in 1837. However, the new intricate decoration was mostly made of moulded papier-mâché
Papier-mâché
Papier-mâché , alternatively, paper-mache, is a composite material consisting of paper pieces or pulp, sometimes reinforced with textiles, bound with an adhesive, such as glue, starch, or wallpaper paste....
, rather than wood.

As before the fire, the church is sub-divided by Corinthian
Corinthian order
The Corinthian order is one of the three principal classical orders of ancient Greek and Roman architecture. The other two are the Doric and Ionic. When classical architecture was revived during the Renaissance, two more orders were added to the canon, the Tuscan order and the Composite order...
columns and pilaster
Pilaster
A pilaster is a slightly-projecting column built into or applied to the face of a wall. Most commonly flattened or rectangular in form, pilasters can also take a half-round form or the shape of any type of column, including tortile....
s into three distinct areas, brightly lit by large windows on opposite sides, the central area being covered by a dome. The walls of the church are richly embellished with gilded stucco
Stucco
Stucco or render is a material made of an aggregate, a binder, and water. Stucco is applied wet and hardens to a very dense solid. It is used as decorative coating for walls and ceilings and as a sculptural and artistic material in architecture...
in rococo design. The ceiling depicts the Ascension of Christ by Pyotr Basinm, while the lunette
Lunette
In architecture, a lunette is a half-moon shaped space, either filled with recessed masonry or void. A lunette is formed when a horizontal cornice transects a round-headed arch at the level of the imposts, where the arch springs. If a door is set within a round-headed arch, the space within the...
s beneath the dome depict Saints Matthew
Matthew the Evangelist
Matthew the Evangelist was, according to the Bible, one of the twelve Apostles of Jesus and one of the four Evangelists.-Identity:...
, Mark
Mark the Evangelist
Mark the Evangelist is the traditional author of the Gospel of Mark. He is one of the Seventy Disciples of Christ, and the founder of the Church of Alexandria, one of the original four main sees of Christianity....
, Luke
Luke the Evangelist
Luke the Evangelist was an Early Christian writer whom Church Fathers such as Jerome and Eusebius said was the author of the Gospel of Luke and the Acts of the Apostles...
and John
John the Evangelist
Saint John the Evangelist is the conventional name for the author of the Gospel of John...
by Fiodor Bruni. The restored cathedral was consecrated on 25 March 1839 by Metropolitan Filaret (Drozdov)
Filaret, Metropolitan of Moscow
Filaret , Metropolitan of Moscow was the most influential figure in the Russian Orthodox Church for more than 40 years, from 1821 to 1867. He was canonized on 13 October 1994 and his feast day is celebrated on November 19.-Life:He was born in Kolomna as Vasily Drozdov...
of Moscow.

The Cathedral was the repository of multiple relics and memorabilia related to the Romanovs. It was used as the imperial family's private place of worship, with the imperial family's members usually praying in a special room beyond the sanctuary. This was the place where Nicholas II prayed at the liturgy
Liturgy
Liturgy is either the customary public worship done by a specific religious group, according to its particular traditions or a more precise term that distinguishes between those religious groups who believe their ritual requires the "people" to do the "work" of responding to the priest, and those...
before exiting onto the balcony to face the crowd on the day of declaring war on Germany in 1914.

In May 1918, the Cathedral was officially closed for worship. It is now used as an exhibition hall of the Hermitage Museum.
The source of this article is wikipedia, the free encyclopedia.  The text of this article is licensed under the GFDL.