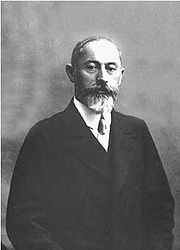 The elected Menshevik-dominated government of Georgia chaired by Noe Zhordania
Noe Zhordania
Noe Zhordania was a Georgian journalist and Menshevik politician. He played an eminent role in the Social Democratic revolutionary movement in Imperial Russia, and later chaired the government of the Democratic Republic of Georgia from July 24, 1918 until March 18, 1921, when the Bolshevik Soviet...
decided to leave the country after the war with the Soviets was irreversibly lost. At the last session of the Constituent Assembly of Georgia
Constituent Assembly of Georgia
The Constituent Assembly of Georgia was a national legislature of the Democratic Republic of Georgia which was elected in February 1919 to ratify the Act of Independence of Georgia and enact the Constitution of 1921...
held in Batumi
Batumi
Batumi is a seaside city on the Black Sea coast and capital of Adjara, an autonomous republic in southwest Georgia. Sometimes considered Georgia's second capital, with a population of 121,806 , Batumi serves as an important port and a commercial center. It is situated in a subtropical zone, rich in...
on 18 March 1921, the deputies voted for the exile of the government. On the same day, the members of the government, several deputies of the Constituent Assembly, a few military officers and their families went aboard the ship Ernest Renan and sailed first to Istanbul
Istanbul
Istanbul , historically known as Byzantium and Constantinople , is the largest city of Turkey. Istanbul metropolitan province had 13.26 million people living in it as of December, 2010, which is 18% of Turkey's population and the 3rd largest metropolitan area in Europe after London and...
, Turkey
Turkey
Turkey , known officially as the Republic of Turkey , is a Eurasian country located in Western Asia and in East Thrace in Southeastern Europe...
, and then to France
France
The French Republic , The French Republic , The French Republic , (commonly known as France , is a unitary semi-presidential republic in Western Europe with several overseas territories and islands located on other continents and in the Indian, Pacific, and Atlantic oceans. Metropolitan France...
whose government granted the Georgian émigrés a political asylum.

Using Georgian state funds, the government bought a 5-ha domain surrounding a small "castle" (actually, a hunting lodge) in Leuville-sur-Orge
Leuville-sur-Orge
Leuville-sur-Orge is a commune south of Paris, France. It is situated in the Essonne department in the Île-de-France region.Inhabitants of Leuville-sur-Orge are known as Leuvillois.-Geography:...
, a small town located near Paris
Paris
Paris is the capital and largest city in France, situated on the river Seine, in northern France, at the heart of the Île-de-France region...
. Leuville was declared as an official residence of the government in exile. Although the émigrés experienced permanent shortage of money, Zhordania's government maintained close contacts with the still popular Menshevik party and other anti-Soviet organizations in Georgia, and thus presented a certain nuisance value for the Soviet authorities. The NGG encouraged and helped the Committee for Independence of Georgia
Committee for Independence of Georgia
The Committee for the Independence of Georgia or the Parity Committee was an underground anti-Soviet organization active in the Georgian Soviet Socialist Republic in the early 1920s. It is commonly known as "Damkom"...
, an inter-party bloc in Georgia, in its struggle against the Bolshevik regime, which culminated in the 1924 August Uprising. Prior to the revolt, Noe Khomeriki
Noe Khomeriki
Noe Khomeriki was a Georgian politician involved in the Social Democrat movement and shot during the Bolshevik Red Terror in the Georgian SSR....
, the Minister of Agriculture in exile, Benia Chkhikvishvili
Benia Chkhikvishvili
Benia Chkhikvishvili was a Georgian politician who was involved in the Social Democratic movement in the early 20th century. An active member of the Menshevik party, he led the 1905 revolution in Guria , a Georgian province on the Black Sea...
, the former mayor of Tbilisi
Tbilisi
Tbilisi is the capital and the largest city of Georgia, lying on the banks of the Mt'k'vari River. The name is derived from an early Georgian form T'pilisi and it was officially known as Tiflis until 1936...
, and Valiko Jugheli
Valiko Jugheli
Vladimir “Valiko” Jugheli was a Georgian politician and military commander.He was involved in the Marxist movement in Georgia at the beginning of the 20th century...
, the former commander of the People’s Guard, secretly returned to Georgia, but were arrested and shortly executed by the Soviet secret police, Cheka
Cheka
Cheka was the first of a succession of Soviet state security organizations. It was created by a decree issued on December 20, 1917, by Vladimir Lenin and subsequently led by aristocrat-turned-communist Felix Dzerzhinsky...
.

The NGG attempted on numerous occasions to bring the Georgian affairs to international attention. Several memoranda, urging for the support of the Georgian independence cause, were sent to the British, French, and Italian
Italy
Italy , officially the Italian Republic languages]] under the European Charter for Regional or Minority Languages. In each of these, Italy's official name is as follows:;;;;;;;;), is a unitary parliamentary republic in South-Central Europe. To the north it borders France, Switzerland, Austria and...
governments as well as the League of Nations
League of Nations
The League of Nations was an intergovernmental organization founded as a result of the Paris Peace Conference that ended the First World War. It was the first permanent international organization whose principal mission was to maintain world peace...
which adopted two resolutions, in 1922 and 1924, in support of Georgia's sovereignty. Generally though, the world largely neglected the violent Soviet takeover of Georgia. On 27 March 1921, the exiled Georgian leadership issued an appeal from their temporary offices in Istanbul
Istanbul
Istanbul , historically known as Byzantium and Constantinople , is the largest city of Turkey. Istanbul metropolitan province had 13.26 million people living in it as of December, 2010, which is 18% of Turkey's population and the 3rd largest metropolitan area in Europe after London and...
to "all socialist parties and workers' organizations" of the world, protesting against the invasion of Georgia. The appeal went unheeded, though. Beyond passionate editorials in some Western newspapers and calls for action from such Georgian sympathizers as Sir Oliver Wardrop, the international response to the events in Georgia was silence.

The hopes of the Georgian émigrés that the Great Powers intended to help had begun to vanish. A heavy loss was sustained by the Georgian emigration when Karlo Chkheidze committed suicide in 1926 and Noe Ramishvili
Noe Ramishvili
Noe Besarionis dze Ramishvili was a Georgian politician and the first Prime Minister of Georgia. He was one of the leaders of the Menshevik wing of the Russian Social Democratic Labour Party. He was also known by his party noms de guerre: Pyotr, and Semyonov N...
, the most energetic Georgian émigré politician and Minister of the Interior in Zhordania’s government, was assassinated by a Bolshevik spy in 1930.

With the emigration of Zhordania's government and the establishment of the Georgian SSR, the question of recognition arose for the foreign states that had de jure
De jure
De jure is an expression that means "concerning law", as contrasted with de facto, which means "concerning fact".De jure = 'Legally', De facto = 'In fact'....
recognized the independence of Georgia before the Soviet takeover. Some countries, particularly Liberia
Liberia
Liberia , officially the Republic of Liberia, is a country in West Africa. It is bordered by Sierra Leone on the west, Guinea on the north and Côte d'Ivoire on the east. Liberia's coastline is composed of mostly mangrove forests while the more sparsely populated inland consists of forests that open...
and Mexico
Mexico
The United Mexican States , commonly known as Mexico , is a federal constitutional republic in North America. It is bordered on the north by the United States; on the south and west by the Pacific Ocean; on the southeast by Guatemala, Belize, and the Caribbean Sea; and on the east by the Gulf of...
, recognized the DRG when its government was already in exile, on 28 March 1921 and 12 May 1921, respectively. The NGG continued to be recognized for some time as "the legitimate Government of Georgia" by Belgium
Belgium
Belgium , officially the Kingdom of Belgium, is a federal state in Western Europe. It is a founding member of the European Union and hosts the EU's headquarters, and those of several other major international organisations such as NATO.Belgium is also a member of, or affiliated to, many...
, the United Kingdom
United Kingdom
The United Kingdom of Great Britain and Northern IrelandIn the United Kingdom and Dependencies, other languages have been officially recognised as legitimate autochthonous languages under the European Charter for Regional or Minority Languages...
, France
France
The French Republic , The French Republic , The French Republic , (commonly known as France , is a unitary semi-presidential republic in Western Europe with several overseas territories and islands located on other continents and in the Indian, Pacific, and Atlantic oceans. Metropolitan France...
and Poland
Poland
Poland , officially the Republic of Poland , is a country in Central Europe bordered by Germany to the west; the Czech Republic and Slovakia to the south; Ukraine, Belarus and Lithuania to the east; and the Baltic Sea and Kaliningrad Oblast, a Russian exclave, to the north...
. The NGG was able to maintain a legation in Paris until 1933 when it was closed as a result of the Franco-Soviet Non-Aggression Pact of 29 November 1932. The NGG and its chief ally in Europe, the International Committee for Georgia, the president of which was Jean Martin
Jean Martin
Jean Martin was a French actor of stage and screen. Martin served in the French Resistance during World War II and later fought with the French paratroopers in Indochina. Theatrically, he is perhaps best-known for originating two roles in Samuel Beckett's most famous plays: Lucky in Waiting for...
, director of Journal de Genève, later launched a campaign against the admission of the Soviet Union into the League of Nations, which nevertheless took place in September 1934. Henceforth, the NGG effectively became defunct.


Heads of the National Government of Georgia in exile