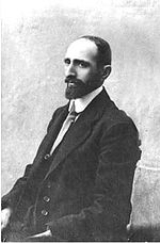 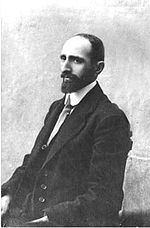 He joined the Russian Social Democratic Labour Party in 1902 and soon became a prominent spokesman of the Mensheviks. Following the 1917 Bolshevik
Bolshevik
The Bolsheviks, originally also Bolshevists , derived from bol'shinstvo, "majority") were a faction of the Marxist Russian Social Democratic Labour Party which split apart from the Menshevik faction at the Second Party Congress in 1903....
October coup
October Revolution
The October Revolution , also known as the Great October Socialist Revolution , Red October, the October Uprising or the Bolshevik Revolution, was a political revolution and a part of the Russian Revolution of 1917...
he became one of the leaders of Georgian National Soviet and was appointed, on April 22, 1918, an Interior Minister of Transcaucasian Democratic Federative Republic
Transcaucasian Democratic Federative Republic
The Transcaucasian Democratic Federative Republic , was a short-lived state composed of the modern-day countries of Armenia, Azerbaijan, and Georgia in the South Caucasus.-...
, a loose federation of Georgia, Armenia
Armenia
Armenia , officially the Republic of Armenia , is a landlocked mountainous country in the Caucasus region of Eurasia...
, and Azerbaijan
Azerbaijan
Azerbaijan , officially the Republic of Azerbaijan is the largest country in the Caucasus region of Eurasia. Located at the crossroads of Western Asia and Eastern Europe, it is bounded by the Caspian Sea to the east, Russia to the north, Georgia to the northwest, Armenia to the west, and Iran to...
.

Ramishvili was one of the most prominent leaders of the Poland
Poland
Poland , officially the Republic of Poland , is a country in Central Europe bordered by Germany to the west; the Czech Republic and Slovakia to the south; Ukraine, Belarus and Lithuania to the east; and the Baltic Sea and Kaliningrad Oblast, a Russian exclave, to the north...
-guided anti-Soviet Prometheism
Prometheism
Prometheism or Prometheanism was a political project initiated by Poland's Józef Piłsudski. Its aim was to weaken the Russian Empire and its successor states, including the Soviet Union, by supporting nationalist independence movements among the major non-Russian peoples that lived within the...
movement. In 1930, he was assassinated in Paris, France, by a Bolshevik spy.
The source of this article is wikipedia, the free encyclopedia.  The text of this article is licensed under the GFDL.