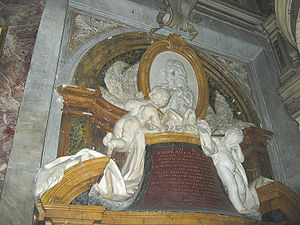 Giovanni Battista Maini (February 6, 1690 – July 29, 1752) was an Italian
Italy
Italy , officially the Italian Republic languages]] under the European Charter for Regional or Minority Languages. In each of these, Italy's official name is as follows:;;;;;;;;), is a unitary parliamentary republic in South-Central Europe. To the north it borders France, Switzerland, Austria and...
sculptor of the Late-Baroque
Baroque
The Baroque is a period and the style that used exaggerated motion and clear, easily interpreted detail to produce drama, tension, exuberance, and grandeur in sculpture, painting, literature, dance, and music...
period, active mainly in Rome.

Maini collaborated in the decoration of the spandrels of the cupola of the Santi Luca e Martina
Santi Luca e Martina
Santi Luca e Martina is a church in Rome, Italy, situated between the Roman Forum and the Forum of Caesar and close to the Arch of Septimus Severus.-History:...
. He worked in Sant'Agnese in Agone
Sant'Agnese in Agone
Sant'Agnese in Agone is a seventeenth century Baroque church in Rome, Italy. It faces onto the Piazza Navona, one of the main urban spaces in the historic centre of the city and the site where the Early Christian Saint Agnes was martyred in the ancient Stadium of Domitian.The rebuilding of the...
, where he executed the papal funerary monument to Innocent X (1729), likely based on Rusconi’s designs. For St. Peter’s Basilica, Maini carved large marble statues of St Francis of Paola (1732; designed by Pietro Bianchi
Pietro Bianchi (painter)
Pietro Bianchi was an Italian painter of the Baroque period, active in Genoa and Rome.Pietro’s father, Giovanni Bianchi, had moved from Sarzana to Rome in 1682. His sister was married to an attendant to the household of the Marchese Marcello Sacchetti, who noted the boy Pietro’s affinity for...
) and St Philip Neri (c. 1735). This was part of a series of sculptures on the founders of orders and included Michelangelo Slodtz's St Bruno. He completed the Archangels Michael and Gabriel statues (c. 1737) for the basilica of Mafra
Mafra National Palace
The Mafra National Palace is a monumental Baroque and Italianized Neoclassical palace-monastery located in Mafra, Portugal, some 28 kilometres from Lisbon. Its dimensions are so huge that it dwarfs the city...
, commissioned by king of Portugal
Portugal
Portugal , officially the Portuguese Republic is a country situated in southwestern Europe on the Iberian Peninsula. Portugal is the westernmost country of Europe, and is bordered by the Atlantic Ocean to the West and South and by Spain to the North and East. The Atlantic archipelagos of the...
. 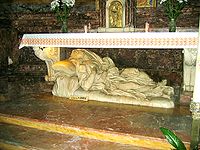 Between 1732-1735, Maini was involved in the prominent commissions by Clement XII for his family chapel, the Corsini
Corsini
Corsini is the name of a Florentine princely family.-History:The founder is said to be Neri Corsini, who came to prominence circa 1170. The family are likely to have originated from Corsica, during the time when the Republic of Pisa was ruling the island. Initially the family was known as Corso ...
chapel in San Giovanni in Laterano. The benedictory bronze statue of Clemente XII, by Maini, is inspired by Bernini
Gian Lorenzo Bernini
Gian Lorenzo Bernini was an Italian artist who worked principally in Rome. He was the leading sculptor of his age and also a prominent architect...
’s Urban VIII in St. Peter’s, and replaced an earlier statue by Carlo Monaldi. He also sculpted figures for his monument to cardinal Neri Corsini" (1733-34), who was the pope’s nephew. In 1741-43, he worked on the portico relief of Madonna of St Luke for Santa Maria Maggiore. Another contemporary relief of St John Preaching was placed in San Giovanni in Laterano. Starting in 1734 Maini was involved in the design work of Fontana di Trevi, but failed to obtain the choice commission from the main architect Nicola Salvi
Nicola Salvi
Nicola Salvi or Niccolò Salvi was an Italian architect most famous for the Trevi Fountain in Rome, where he was born and died. His work is in the late Roman Baroque style. In addition to the Trevi Fountain, Salvi did minor works such as churches and the enlargement of the Odescalchi Palace with...
for the final sculpting of the statue of Neptune and Oceanus group, which instead was given to Pietro Bracci
Pietro Bracci
Pietro Bracci was an Italian sculptor working in the Late Baroque manner.-Biography:He was born in Rome and became a student of Giuseppe Bartolomeo Chiari and Camillo Rusconi...
(1743-59). He also sent some reliefs to Siena
Siena
Siena is a city in Tuscany, Italy. It is the capital of the province of Siena.The historic centre of Siena has been declared by UNESCO a World Heritage Site. It is one of the nation's most visited tourist attractions, with over 163,000 international arrivals in 2008...
, for the Chigi
Chigi
Chigi may refer to:* Chigi , a crossbreed between a Welsh Corgi and a chihuahua * House of Chigi, a Roman princely family* Chigi , an element in Japanese architecture...
chapel in the Cathedral of Siena.

In 1744 he was again working for the John V of Portugal, one of the greatest patrons of arts in the 18th century. He designed for the king a magnificent statue of the Immaculate Conception cast by Giuseppe Gagliardi. This huge silver-gilt
Silver-gilt
Silver-gilt or gilded/gilt silver, sometimes known in American English by the French term vermeil, is silver gilded with gold. Most large objects made in goldsmithing that appear to be gold are actually silver-gilt; for example most sporting trophies, medals , and many crown jewels...
image was nine palmi high. It was Blessed by Pope Benedict XIV himself in 1749 before being dispatched to Lisbon where it was destined to the Patriarchal Royal Chapel of the Ribeira Palace. It was for a few days the talk of Rome and was to be destroyed just a few years later by the 1755 Lisbon earthquake
1755 Lisbon earthquake
The 1755 Lisbon earthquake, also known as the Great Lisbon Earthquake, was a megathrust earthquake that took place on Saturday 1 November 1755, at around 9:40 in the morning. The earthquake was followed by fires and a tsunami, which almost totally destroyed Lisbon in the Kingdom of Portugal, and...
.