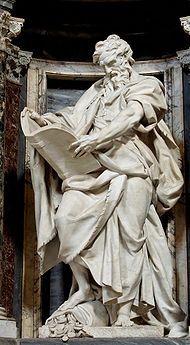 Initially trained in his hometown of Milan
Milan
Milan is the second-largest city in Italy and the capital city of the region of Lombardy and of the province of Milan. The city proper has a population of about 1.3 million, while its urban area, roughly coinciding with its administrative province and the bordering Province of Monza and Brianza ,...
with Giuseppe Rusnati
Giuseppe Rusnati
Giuseppe Rusnati was a Lombard sculptor of the Rococo period. Known for having trained with Ercole Ferrata and subsequently from 1673 to c. 1686 training a young Camillo Rusconi, prior to the latter's relocation himself to Ferrata's studio in Rome. Born near Como; he died in 1713...
. By 1685-1686, he had moved to Rome and into the studio of Ercole Ferrata
Ercole Ferrata
Ercole Ferrata was an Italian sculptor of the Roman Baroque.-Biography:A native of Pellio Inferiore, near Como, Ferrata initially apprenticed with Alessandro Algardi, and became one of his prime assistants...
, who died within a year or two of his arrival. Rusconi's talent attracted commissions, for example, for plaster allegorical statues depicting four virtues (prudence, justice, temperance, and strength) for the Ludovisi chapel in the church of Sant'Ignazio
Sant'Ignazio
The Church of Saint Ignatius of Loyola at Campus Martius is Roman Catholic titular church dedicated to Ignatius of Loyola, the founder of the Jesuit order, located in Rome, Italy...
. He then worked alongside Le Gros
Pierre Le Gros the Younger
Pierre Le Gros was a French sculptor, active almost exclusively in Baroque Rome. Nowadays, his name is commonly written Legros, while he himself always signed as Le Gros; he is frequently referred to either as 'the Younger' or 'Pierre II' to distinguish him from his father, Pierre Le Gros the...
in sculpting angels for the tympanum
Tympanum (architecture)
In architecture, a tympanum is the semi-circular or triangular decorative wall surface over an entrance, bounded by a lintel and arch. It often contains sculpture or other imagery or ornaments. Most architectural styles include this element....
of the altar of Saint Ignatius at the Church of the Gesù
Church of the Gesu
The Church of the Gesù is the mother church of the Society of Jesus, a Roman Catholic religious order also known as the Jesuits. Officially named , its facade is "the first truly baroque façade", introducing the baroque style into architecture ,. The church served as model for innumerable Jesuit...
.

Camillo’s masterpieces are the four larger-than-life apostles (Matthew, James the Great, Andrew, and John) completed during 1708-1718 for the niches in San Giovanni in Laterano.
This sculptural program was the major such project in the Rome of his day. The other main sculptors for the project, Le Gros and Pierre-Etienne Monnot
Pierre-Étienne Monnot
Pierre-Étienne Monnot was a French sculptor working mostly in Rome in a late-Baroque idiom.Monnot was born at Orchamps-Vennes, Doubs, Franche-Comté, and brought up at Besançon. Trained at first by his father, he was apprenticed to a sculptor at Dijon, then developed his style during a decade in...
, each only garnered two apostles. Pope Clement XI
Pope Clement XI
Pope Clement XI , born Giovanni Francesco Albani, was Pope from 1700 until his death in 1721.-Early life:...
had established a committee to select the artists, and included Carlo Fontana
Carlo Fontana
Carlo Fontana was an Italian architect, who was in part responsible for the classicizing direction taken by Late Baroque Roman architecture.-Biography:...
and Rusconi's friend, Carlo Maratta, in the panel. The classical restraint of the figures was to set a trend toward neoclassicism
Neoclassicism
Neoclassicism is the name given to Western movements in the decorative and visual arts, literature, theatre, music, and architecture that draw inspiration from the "classical" art and culture of Ancient Greece or Ancient Rome...
.

Other works include some of the architectural decoration for San Silvestro in Capite
San Silvestro in Capite
The Church of Saint Sylvester in Capite is a Roman Catholic minor basilica and titular church in Rome dedicated to Pope Saint Sylvester I. Built in the 8th century as a shrine for the relics of the saints and martyrs from the Catacombs, the church is the National church of Great Britain.The Latin...
, San Salvatore in Lauro
San Salvatore in Lauro
San Salvatore in Lauro is a Catholic church in central Rome, Italy, located in the rione Ponte. It is the "national church" of the marchigiani, the inhabitants of the Marche region of Italy...
, and for the Chiesa Nuova (Santa Maria in Vallicella
Santa Maria in Vallicella
Santa Maria in Vallicella, also called Chiesa Nuova, is a church in Rome, Italy, which today faces onto the main thoroughfare of the Corso Vittorio Emanuele...
). He also completed the tomb of Pope Gregory XIII
Pope Gregory XIII
Pope Gregory XIII , born Ugo Boncompagni, was Pope from 1572 to 1585. He is best known for commissioning and being the namesake for the Gregorian calendar, which remains the internationally-accepted civil calendar to this date.-Youth:He was born the son of Cristoforo Boncompagni and wife Angela...
(1715 - 1723) for the St. Peter's
St. Peter's Basilica
The Papal Basilica of Saint Peter , officially known in Italian as ' and commonly known as Saint Peter's Basilica, is a Late Renaissance church located within the Vatican City. Saint Peter's Basilica has the largest interior of any Christian church in the world...
; the tomb of Bartolomeo Corsino in San Giovanni in Laterano, and of the principe Alessandro Sobieski in the church of Santa Maria della Concezione
Santa Maria della Concezione dei Cappuccini
Santa Maria della Concezione dei Cappuccini, or Our Lady of the Conception of the Capuchins, is a church in Rome, Italy, commissioned by Pope Urban VIII, whose brother, Antonio Barberini, was a Capuchin friar...
. He also complete the portrait of Giulia Albani degli Olivieri, the powerful aunt of Clement XI, (presently in the Kunsthistorisches Museum
Kunsthistorisches Museum
The Kunsthistorisches Museum is an art museum in Vienna, Austria. Housed in its festive palatial building on Ringstraße, it is crowned with an octagonal dome...
, Vienna.

Among his pupils were Pietro Bracci
Pietro Bracci
Pietro Bracci was an Italian sculptor working in the Late Baroque manner.-Biography:He was born in Rome and became a student of Giuseppe Bartolomeo Chiari and Camillo Rusconi...
, Giovanni Battista Maini
Giovanni Battista Maini
Giovanni Battista Maini was an Italian sculptor of the Late-Baroque period, active mainly in Rome.He was born in Cassano Magnago in Lombardy, and died in Rome. He may have had contacts with Foggini in Florence. By 1708, he had moved to Rome where he joined the large studio of Camillo Rusconi,...
, and Filippo della Valle
Filippo della Valle
Filippo della Valle was an Italian late-Baroque or early Neoclassic sculptor, active mostly in Rome.-Biography:Della Valle was born in Florence....
. In 1727, he was named principe of the Accademia di San Luca
Accademia di San Luca
The Accademia di San Luca, was founded in 1577 as an association of artists in Rome, under the directorship of Federico Zuccari, with the purpose of elevating the work of "artists", which included painters, sculptors and architects, above that of mere craftsmen. Other founders included Girolamo...
.
The source of this article is wikipedia, the free encyclopedia.  The text of this article is licensed under the GFDL.