Pietro Bracci was an Italian sculptor working in the Late Baroque
Baroque
The Baroque is a period and the style that used exaggerated motion and clear, easily interpreted detail to produce drama, tension, exuberance, and grandeur in sculpture, painting, literature, dance, and music...
manner.

He was born in Rome
Rome
Rome is the capital of Italy and the country's largest and most populated city and comune, with over 2.7 million residents in . The city is located in the central-western portion of the Italian Peninsula, on the Tiber River within the Lazio region of Italy.Rome's history spans two and a half...
and became a student of Giuseppe Bartolomeo Chiari
Giuseppe Bartolomeo Chiari
Giuseppe Bartolomeo Chiari , also known simply as Giuseppe Chiari, was an Italian painter of the late-Baroque period, active mostly in Rome....
and Camillo Rusconi
Camillo Rusconi
Camillo Rusconi was an Italian sculptor of the late Baroque in Rome. His style displays both features of Baroque and Neoclassicism. He has been described as a Carlo Maratta in marble.-Biography:...
. His most familiar works are the colossal Oceanus or Neptune of the Trevi Fountain
Trevi Fountain
The Trevi Fountain is a fountain in the Trevi rione in Rome, Italy. Standing 26 metres high and 20 metres wide, it is the largest Baroque fountain in the city and one of the most famous fountains in the world....
, Rome, after a modello by Giovanni Battista Maini
Giovanni Battista Maini
Giovanni Battista Maini was an Italian sculptor of the Late-Baroque period, active mainly in Rome.He was born in Cassano Magnago in Lombardy, and died in Rome. He may have had contacts with Foggini in Florence. By 1708, he had moved to Rome where he joined the large studio of Camillo Rusconi,...
, and four prominent tomb monuments in Rome.

He sculpted the figures for the tomb of Benedict XIII
Pope Benedict XIII
-Footnotes:...
(1734) in Santa Maria sopra Minerva
Santa Maria sopra Minerva
The Basilica of Saint Mary Above Minerva is a titular minor basilica and one of the most important churches of the Roman Catholic Dominican order in Rome, Italy. The church, located in the Piazza della Minerva in the Campus Martius region, is considered the only Gothic church in Rome. It houses...
, Rome, which was designed by the architect Carlo Marchionni
Carlo Marchionni
Carlo Marchionni was an Italian architect. He was also a sculptor and a virtuoso draughtsman, who mixed in the artistic and intellectual circles.-Biography:Marchionni was born in Rome....
, and for the tomb of Benedict XIV (1763-1770) in the Basilica of Saint Peter, completed with the help of his pupil Gaspare Sibilia. The third tomb at St Peter's on which he worked commemorates Maria Clementina Sobieski (1742), wife of the "Old Pretender", James Stuart, one of the Catholic Stuart claimants to the thrones of England, Scotland and Ireland. It is one of three monuments in St. Peter's dedicated to the deposed royal line of Stuart. The sculpture is in polychrome with an image of Maria Clementina in mosaic held aloft by Charity. The monument was conceived by the architect Filippo Barigioni
Filippo Barigioni
Filippo Barigioni was an Italian sculptor and architect working in the Late Baroque tradition.Bariogioni was born in Rome. His career was spent largely on papal commissions, including aqueducts and fountains, in and around Rome...
, who provided preliminary sketches. Bracci also designed and sculpted the polychromatic tomb of Cardinal Giuseppe Renato Imperiali (1741) in Sant'Agostino
Sant'Agostino
Sant'Agostino is a church in Rome, Italy, not far from Piazza Navona. It is one of the first Roman churches built during the Renaissance. The construction was funded by Guillaume d'Estouteville, Archbishop of Rouen and Papal Chancellor. The façade was built in 1483 by Giacomo di Pietrasanta, using...
in Rome. 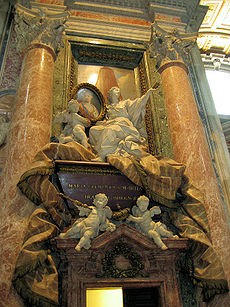 His best known work is the colossal Oceanus
Oceanus
Oceanus ; , Ōkeanós) was a pseudo-geographical feature in classical antiquity, believed by the ancient Greeks and Romans to be the world-ocean, an enormous river encircling the world....
— also known as Neptune — (after 1759) of the Trevi Fountain
Trevi Fountain
The Trevi Fountain is a fountain in the Trevi rione in Rome, Italy. Standing 26 metres high and 20 metres wide, it is the largest Baroque fountain in the city and one of the most famous fountains in the world....
, Rome, where he was constrained to follow a plaster modello
Modello
A modello, from the Italian, is a preparatory study or model, usually at a smaller scale, for a work of art or architecture, especially one produced for the approval of the commissioning patron. The term gained currency in art circles in Tuscany in the fourteenth century. Modern definitions in...
by Giovanni Battista Maini
Giovanni Battista Maini
Giovanni Battista Maini was an Italian sculptor of the Late-Baroque period, active mainly in Rome.He was born in Cassano Magnago in Lombardy, and died in Rome. He may have had contacts with Foggini in Florence. By 1708, he had moved to Rome where he joined the large studio of Camillo Rusconi,...
, who died before he could execute the marble. Bracci executed the Oceanus and the tritons when he took over work on the fountain. After the death of Nicola Salvi
Nicola Salvi
Nicola Salvi or Niccolò Salvi was an Italian architect most famous for the Trevi Fountain in Rome, where he was born and died. His work is in the late Roman Baroque style. In addition to the Trevi Fountain, Salvi did minor works such as churches and the enlargement of the Odescalchi Palace with...
(1751) work was halted with only the foundations built. A few years later the works were assigned to Panini who was stopped when he started to make changes to the project. Bracci took over in 1761 and finished the fountain in 1763. Nicola Salvi and Pietro Bracci were longtime friends, both being members of Arcadia and members of the confraternity of the virtuosi at the Pantheon
Pantheon, Rome
The Pantheon ,Rarely Pantheum. This appears in Pliny's Natural History in describing this edifice: Agrippae Pantheum decoravit Diogenes Atheniensis; in columnis templi eius Caryatides probantur inter pauca operum, sicut in fastigio posita signa, sed propter altitudinem loci minus celebrata.from ,...
.

There are several official busts of Benedict XIII by Bracci, and a terracotta (1724), conserved in Palazzo Venezia
Palazzo Venezia
The Palazzo di Venezia is a palazzo in central Rome, Italy, just north of the Capitoline Hill. The original structure of this great architectural complex consisted of a modest medieval house intended as the residence of the cardinals appointed to the Church of San Marco...
, Rome. The aged glare of the pope in the marble portrait was an image difficult to beautify.