Encyclopedia
The gilt-head bream (Sparus aurata) is a fish of the bream family Sparidae
Sparidae
The Sparidae is a family of fish, included in the order Perciformes. The fish of the family are commonly called sea breams and porgies . The sheepshead, scup, and red sea bream are species in this family. They are found in shallow temperate and tropical waters and are bottom-dwelling carnivores....
found in the Mediterranean Sea
Mediterranean Sea
The Mediterranean Sea is a sea connected to the Atlantic Ocean surrounded by the Mediterranean region and almost completely enclosed by land: on the north by Anatolia and Europe, on the south by North Africa, and on the east by the Levant...
and the eastern coastal regions of the North Atlantic Ocean. It commonly reaches about 35 centimetres (1.1 ft) in length, but may reach 70 centimetres (2.3 ft) and weigh up to about 17 kilograms (37.5 lb).

The gilt-head bream is generally considered the best-tasting of the breams and has given the whole family of Sparidae its name. 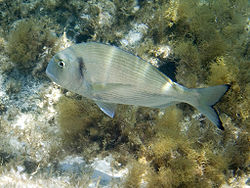 It is typically found at depths of 0–30 m (0–98.4 ft), but may occur to 150 metres (492.1 ft)., seen singly or in small groups near seagrass
Seagrass
Seagrasses are flowering plants from one of four plant families , all in the order Alismatales , which grow in marine, fully saline environments.-Ecology:...
or over sandy bottoms, but sometimes in estuaries during the spring.

It mainly feeds on shellfish
Shellfish
Shellfish is a culinary and fisheries term for exoskeleton-bearing aquatic invertebrates used as food, including various species of molluscs, crustaceans, and echinoderms. Although most kinds of shellfish are harvested from saltwater environments, some kinds are found only in freshwater...
, but also some plant material.

The fish is widely used in Mediterranean cooking, under a variety of names:


In Portugal
Portugal
Portugal , officially the Portuguese Republic is a country situated in southwestern Europe on the Iberian Peninsula. Portugal is the westernmost country of Europe, and is bordered by the Atlantic Ocean to the West and South and by Spain to the North and East. The Atlantic archipelagos of the...
the fish is referred to as Orata or Dourada (golden in Portuguese
Portuguese language
Portuguese is a Romance language that arose in the medieval Kingdom of Galicia, nowadays Galicia and Northern Portugal. The southern part of the Kingdom of Galicia became independent as the County of Portugal in 1095...
; a name also used for other species, e.g. Brachyplatystoma
Brachyplatystoma
Brachyplatystoma is a genus of catfish from the family Pimelodidae. As the occasionally used common name goliath catfishes indicates, this genus includes some of the largest species of catfish, including the Piraíba, B. filamentosum, which reaches about in length...
rousseauxii), and is widely available as a fresh fish meal in local restaurants in the Algarve and along costal Portugal.
In Spain
Spain
Spain , officially the Kingdom of Spain languages]] under the European Charter for Regional or Minority Languages. In each of these, Spain's official name is as follows:;;;;;;), is a country and member state of the European Union located in southwestern Europe on the Iberian Peninsula...
it is called the dorada. It is also highly prized and is both commercially fished and raised in fish farms. In north east Spain (Catalonia
Catalonia
Catalonia is an autonomous community in northeastern Spain, with the official status of a "nationality" of Spain. Catalonia comprises four provinces: Barcelona, Girona, Lleida, and Tarragona. Its capital and largest city is Barcelona. Catalonia covers an area of 32,114 km² and has an...
) the fish is referred to as orada or daurada.
In France
France
The French Republic , The French Republic , The French Republic , (commonly known as France , is a unitary semi-presidential republic in Western Europe with several overseas territories and islands located on other continents and in the Indian, Pacific, and Atlantic oceans. Metropolitan France...
it is called daurade or dorade.
In Italy
Italy
Italy , officially the Italian Republic languages]] under the European Charter for Regional or Minority Languages. In each of these, Italy's official name is as follows:;;;;;;;;), is a unitary parliamentary republic in South-Central Europe. To the north it borders France, Switzerland, Austria and...
, the fish is called "orata" (meaning golden)
In Croatia
Croatia
Croatia , officially the Republic of Croatia , is a unitary democratic parliamentary republic in Europe at the crossroads of the Mitteleuropa, the Balkans, and the Mediterranean. Its capital and largest city is Zagreb. The country is divided into 20 counties and the city of Zagreb. Croatia covers ...
it is called ovrata, orada, lovrata or komarča.
Ιn Turkey
Turkey
Turkey , known officially as the Republic of Turkey , is a Eurasian country located in Western Asia and in East Thrace in Southeastern Europe...
the fish is referred to as çipura or çupra.
In Greece
Greece
Greece , officially the Hellenic Republic , and historically Hellas or the Republic of Greece in English, is a country in southeastern Europe....
and Cyprus
Cyprus
Cyprus , officially the Republic of Cyprus , is a Eurasian island country, member of the European Union, in the Eastern Mediterranean, east of Greece, south of Turkey, west of Syria and north of Egypt. It is the third largest island in the Mediterranean Sea.The earliest known human activity on the...
it is called tsipoúra (τσιπούρα).
In Malta
Malta
Malta , officially known as the Republic of Malta , is a Southern European country consisting of an archipelago situated in the centre of the Mediterranean, south of Sicily, east of Tunisia and north of Libya, with Gibraltar to the west and Alexandria to the east.Malta covers just over in...
it is called awrata.
In Albania
Albania
Albania , officially known as the Republic of Albania , is a country in Southeastern Europe, in the Balkans region. It is bordered by Montenegro to the northwest, Kosovo to the northeast, the Republic of Macedonia to the east and Greece to the south and southeast. It has a coast on the Adriatic Sea...
it is called koce.
In Israel
Israel
The State of Israel is a parliamentary republic located in the Middle East, along the eastern shore of the Mediterranean Sea...
it is known as chipura or denisse.
In Serbia
Serbia
Serbia , officially the Republic of Serbia , is a landlocked country located at the crossroads of Central and Southeast Europe, covering the southern part of the Carpathian basin and the central part of the Balkans...
it is orada.
In Egypt
Egypt
Egypt , officially the Arab Republic of Egypt, Arabic: , is a country mainly in North Africa, with the Sinai Peninsula forming a land bridge in Southwest Asia. Egypt is thus a transcontinental country, and a major power in Africa, the Mediterranean Basin, the Middle East and the Muslim world...
it is called denees.