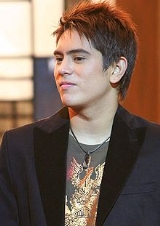 Encyclopedia
Gerald Anderson is a Filipino American
Filipino American
Filipino Americans are Americans of Filipino ancestry. Filipino Americans, often shortened to "Fil-Ams", or "Pinoy",Filipinos in what is now the United States were first documented in the 16th century, with small settlements beginning in the 18th century...
actor
Actor
An actor is a person who acts in a dramatic production and who works in film, television, theatre, or radio in that capacity...
who was a former housemate on the first season edition of the Philippine reality television
Reality television
Reality television is a genre of television programming that presents purportedly unscripted dramatic or humorous situations, documents actual events, and usually features ordinary people instead of professional actors, sometimes in a contest or other situation where a prize is awarded...
show Pinoy Big Brother: Teen Edition
Pinoy Big Brother: Teen Edition
Pinoy Big Brother: Teen Edition began airing on April 23, 2006, three weeks after the end of the first Celebrity Edition. It ran for six weeks and closely resembled the original show, unlike the relatively short Teen Big Brother, its British counterpart...
. He rose to fame through the Filipino teleseryes Sana Maulit Muli
Sana Maulit Muli
Sana Maulit Muli is a Filipino primetime soap opera produced by ABS-CBN. It was considered as one of the most watched television shows in the Philippines for 2007. Its name is roughly translated in English: "I Wish It Could Happen Again"...
, My Girl
My Girl (Philippine TV series)
My Girl is an adaptation of the Korean drama series of the same title by ABS-CBN in the Philippines. The original series was aired by the said station in 2006.-Synopsis:...
, Tayong Dalawa
Tayong Dalawa
Tayong Dalawa is a Philippine primetime drama series broadcast on ABS-CBN and worldwide on TFC in 2009. It premiered on April 6, 2010 in Malaysia on Astro Prima followed by August 31, 2010 in Singapore on Channel 5...
, Kung Tayo'y Magkakalayo
Kung Tayo'y Magkakalayo
Kung Tayo'y Magkakalayo is a Philippine primetime drama series that aired on ABS-CBN.It became the part of the 60th Year of Pinoy Soap Opera Celebration for its First Roaster of Primetime Drama's it won 3 ASAP awards for Best TV Series of the year Favorite TV Couple characters played by Gerald...
, and Wansapanataym
Wansapanataym
Wansapanataym is a Philippine fantasy-drama anthology produced and aired by ABS-CBN. The series aired in 1997 until 2005 and it was re-aired in 2006 until 2007...
: Rod Santiago's: Buhawi Jack
Buhawi Jack
Wansapanataym Presents: Buhawi Jack is the first fantaserye offering in the Wansapanataym series aired on ABS-CBN. This series is based on the comic strip Buhawi Jack by Rod Santiago.-Comics:...
.

He is currently under contract to Star Magic
Star Magic
Star Magic, Inc., , is ABS-CBN's training and management program for its contract talents. It was designed to assist young talent in the Philippines...
, ABS-CBN
ABS-CBN
ABS–CBN Corporation is a Philippine-based media conglomerate. It is the Philippines' largest media and entertainment conglomerate. The corporation was the merger of Alto Broadcasting System which at that time owned by James Lindenberg and Antonio Quirino, and the Chronicle Broadcasting Network ...
's home based talent agency.

Anderson was discovered by Joross Gamboa
Joross Gamboa
John Ross Sanchez Gamboa, better known by his screen name Joross Gamboa , is a Filipino actor who is now a former GMA Network contract artist after moving back to ABS-CBN.-New career:...
while the latter was performing in his hometown. Gamboa introduced him to his manager, Jhun Reyes, who then brought him to ABS-CBN to join PBB: Teen Edition.