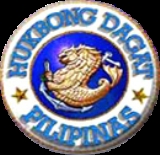 On January 4, 2011, Rear Admiral
Rear Admiral
Rear admiral is a naval commissioned officer rank above that of a commodore and captain, and below that of a vice admiral. It is generally regarded as the lowest of the "admiral" ranks, which are also sometimes referred to as "flag officers" or "flag ranks"...
Alexander Pama assumed command as the new Flag Officer-in-Command (FOIC).
The need of a naval force was illustrated when the Filipino revolutionaries
Philippine Revolution
The Philippine Revolution , called the "Tagalog War" by the Spanish, was an armed military conflict between the people of the Philippines and the Spanish colonial authorities which resulted in the secession of the Philippine Islands from the Spanish Empire.The Philippine Revolution began in August...
included a provision in the Biak-na-Bato Constitution authorizing the government to license privateers to engage foreign enemy vessels.

In the English
English language
English is a West Germanic language that arose in the Anglo-Saxon kingdoms of England and spread into what was to become south-east Scotland under the influence of the Anglian medieval kingdom of Northumbria...
version of the same constitution, it was stipulated that after the army
Philippine Army
The Philippine Army is the ground arm of the Armed Forces of the Philippines . Its official name in Tagalog is Hukbong Katihan ng Pilipinas. On July 23, 2010, President Benigno Aquino III appointed Maj. Gen...
was organized, another such force should be created for the protection of the coasts of the Philippines and its seas, with a Secretary of the Navy being appointed to head this force.

The infant Philippine Navy was established during the Philippine Revolution, when General Emilio Aguinaldo
Emilio Aguinaldo
Emilio Aguinaldo y Famy was a Filipino general, politician, and independence leader. He played an instrumental role during the Philippines' revolution against Spain, and the subsequent Philippine-American War or War of Philippine Independence that resisted American occupation...
formed the Revolutionary Navy, which then consisted of the pinnace
Pinnace (ship's boat)
As a ship's boat the pinnace is a light boat, propelled by sails or oars, formerly used as a "tender" for guiding merchant and war vessels. In modern parlance, pinnace has come to mean a boat associated with some kind of larger vessel, that doesn't fit under the launch or lifeboat definitions...
Magdalo and several steam launch
Launch (boat)
A launch in contemporary usage refers to a large motorboat. The name originally referred to the largest boat carried by a warship. The etymology of the word is given as Portuguese lancha "barge", from Malay lancha, lancharan, "boat," from lanchar "velocity without effort," "action of gliding...
es captured from the Spanish.

Good day! I would like to ask about legal matters.. like for instance a navy personnel is married in a christian wedding, after sometime he con...

Hi! I just want to ask.. When can a Philippine Navy get married? Cause I heard from somebody that a military who just graduated from his training, is ...

Are 201 Files available online? How about names and last known address, email address and phone numbers of active and inactive officers and men from O...
More
x