Sana Maulit Muli is about two young lovers who discover how true love can overpower fate and destiny. Small-town girl Jasmine Sta. Maria (Kim Chiu) and Travis Johnson (Gerald Anderson), the illegitimate son of an American
soldier, both meet as stowaways in a ship sailing from Cebu. They promise to write each other as they were separated but this promise is intercepted as soon as Camille Soriano (Erich Gonzales) deceives Travis by writing to him as Jasmine. In time, Travis' father dies and their family leaves for the Philippines only to meet up with both Camille and consequently Jasmine. A rocky start between Jasmine and Travis (when Jasmine was assigned to tutor him after a school brawl) turns into friendship then real love. Jasmine learns later on of Camille's deception and soon after learns that Camille is her younger sister. In order to make amends with her sister, Jasmine gives away everything for Camille's happiness leading to the break-up. Due to the taunting of Travis' brother Brandon, a twist ensues as Jasmine dies by a bus accident.

Given a chance to change destiny by the mysterious Mang Andres (Michael de Mesa), Travis leaps back in time to be with the person that he loves. Also, Brandon, (Jake Cuenca) falls in love with Bianca (Neri Naig), Clara's (Glydel Mercado) sister. Clara is also Camille's stepmom. Jasmine's mother,(Mickey Ferriols)is the true mother of Camille, which means Jasmine and Camille are sisters. But Camille does not know the truth. Also, back to the love affair of Bianca and Brandon, he is falling head over heels for her and she does, as well, after all the sweet visits of him to her photo shop. (Bianca is a photographer from Boston who moves back because of the breakup of her boyfriend.) Finally, Bianca gives in, and she accepts Brandon, sleeping in his condo for the night which results to her getting pregnant. Back to Travis and Jasmine; Travis attempts to let Jasmine love him but the fact that Jasmine does not know about their love hinders Travis. Despite Mang Andres request to Travis of not to reveal what he knows about the past, he stubbornly continues to try to change everything. Every time Travis reveals something from the past, it ultimately causes a ripple in time. For one, he confronts Camille about her lie on being Poknat. However, Camille insists that she is indeed the real Poknat by singing Poknat and Bokbok's song and also showing Travis the heart of the friendship, the sandal (which in Book 1 Camille did not have). Thus, instead of trying to gain Jasmine's love again, Travis could ultimately be changing the fabric of time for the worse; for example, Clara, Camille's stepmom, dies of a fire because of Travis. Jasmine realizes because of her life that Travis is saving, other people are dying in exchange for her life. But earlier before then, because Travis saved st the bet, Jasmine and Travis won't be disturbed by him and they can finally be together again. As the time comes closer, Travis tries to save Jasmine's life but is mistaken to have mental problems since his paranoia for Jasmine's safety is becoming worse, so he's then confined in a hospital. As the night of Jasmine's death comes, Travis goes through different escapades to escape the hospital, to save Jasmine. Finally getting to see each other, Jasmine, still afraid but willing to die, promises to fight for her life. As the moment arrives, an out of control truck hits both Jasmine and Travis, which left Jasmine safe and Travis in a critical condition. Fully shocked by what had happened Jasmine makes a deal with Mang Andres to keep Travis alive, in exchange for her life. But all plans fail when Travis pursues to die to save Jasmine from dying again, and just in time Jasmine is saved by her parents. All things opposite from the Book 1, everyone mourns for Travis' death, except for Jasmine, because she believes in her heart that Travis and herself will be together again. Before going back to the United States, Travis' step mother, Monica, leaves all of Travis' belongings to Jasmine, as she knows Travis would've wanted her to have it all. Jasmine sees the watch that brought Travis back in time, included in all his things. Jasmine goes back in time, during her happiest times with Travis and far away from danger, with that happening Mang Andres finally decides to let Jasmine and Travis be, leaving all of them happy and alive. In conclusion, Brandon and Bianca are a happy couple, married and in love, with a new baby son. Jasmine goes to law school and Travis becomes a doctor. She soon graduates and becomes a successful lawyer. Camille becomes a happy teacher. Jasmine and Travis soon marry and are happily together. 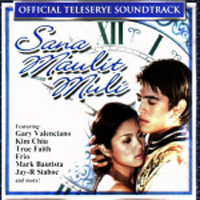 An original soundtrack was made by ASAP Music
ASAP Music
ASAP Music is the record label of the ABS-CBN Network's variety show, ASAP 07. ASAP hosts collaborated for the first time to produce quality music on its debut release, The Hotsilog Album...
and distributed by Star Records
Star Records
Star Records, referring loosely to two companies, Star Recording and Star Songs Music Publishing, is an ABS-CBN Entertainment Group company whose main lines of business include: producing, developing and distributing audio and video content; music publishing; events production and music artists...
for the series.

The two main characters each have their own love theme songs. The song for Travis is "Say You'll Never Go" by Erik Santos
Erik Santos
Rhoderick Ramos Santos , more commonly known as simply Erik Santos, is a Filipino singer, actor, TV host, commercial model, and the winner of the ABS-CBN program Star In A Million Season 1 in January 2004.-Early life:...
, and the one for Jasmine is "I Remember the Boy" by Sheryn Regis
Sheryn Regis
Sheryn Mae Poncardas Regis , better known as simply Sheryn Regis, is a Filipina pop singer, composer, host and actress. Sheryn was a consistent top scorer of Star in a Million, where she eventually ended as runner-up to Erik Santos in January 2004...
. The track "Isang Pangarap Lamang" was sung by True Faith.

This series was sold to TBS under the PTS network, entitled "Chances". It was dubbed in Taiwanese, and premiered on February 18, 2008. In spite of its late in the night schedule at 11:00 PM, it constantly made waves in Taiwan.