Encyclopedia
The Georgia Department of Transportation (GDOT) is the organization in charge of developing and maintaining all state and federal roadways in the U.S. state
U.S. state
A U.S. state is any one of the 50 federated states of the United States of America that share sovereignty with the federal government. Because of this shared sovereignty, an American is a citizen both of the federal entity and of his or her state of domicile. Four states use the official title of...
of Georgia
Georgia (U.S. state)
Georgia is a state located in the southeastern United States. It was established in 1732, the last of the original Thirteen Colonies. The state is named after King George II of Great Britain. Georgia was the fourth state to ratify the United States Constitution, on January 2, 1788...
. In addition to highway
Highway
A highway is any public road. In American English, the term is common and almost always designates major roads. In British English, the term designates any road open to the public. Any interconnected set of highways can be variously referred to as a "highway system", a "highway network", or a...
s, the department also has a limited role in developing public transportation and general aviation
General aviation
General aviation is one of the two categories of civil aviation. It refers to all flights other than military and scheduled airline and regular cargo flights, both private and commercial. General aviation flights range from gliders and powered parachutes to large, non-scheduled cargo jet flights...
programs. GDOT is headquartered in downtown
Downtown Atlanta
Downtown Atlanta is the first and largest of the three financial districts in the city of Atlanta. Downtown Atlanta is the location of many corporate or regional headquarters, city, county, state and federal government facilities, sporting facilities, and is the central tourist attraction of the city...
Atlanta and is part of the executive branch of state government
Government of Georgia (U.S. state)
The state government of Georgia is the U.S. state governmental body established by the Georgia State Constitution. It is a republican government with three branches: the legislature, executive, and judiciary...
.
GDOT has broken up the state of Georgia into seven districts in order to facilitate regional development. Each district is responsible for the planning, design, construction and maintenance of the state and federal highways in their region.

Major freight railroads in Georgia include CSX and Norfolk Southern. Passenger service in Georgia is available on two Amtrak
Amtrak
The National Railroad Passenger Corporation, doing business as Amtrak , is a government-owned corporation that was organized on May 1, 1971, to provide intercity passenger train service in the United States. "Amtrak" is a portmanteau of the words "America" and "track". It is headquartered at Union...
routes: the Crescent
Crescent (Amtrak)
The Crescent is a passenger train operated by Amtrak in the eastern part of the United States. It runs daily from Pennsylvania Station in New York City to New Orleans Union Passenger Terminal in New Orleans, Louisiana as train 19 and returns, on the same route, as train 20. Most of the route of...
, which runs from New York to Washington, D.C., through north Georgia and Atlanta to New Orleans and the other runs from New York to the Georgia coast and from there to Florida. 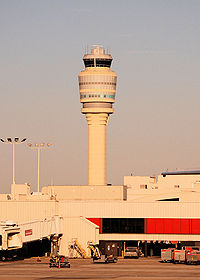 The Georgia Department of Transportation has several different divisions. They include:

In February 2009, Governor Sonny Perdue
Sonny Perdue
George Ervin "Sonny" Perdue III, was the 81st Governor of Georgia. Upon his inauguration in January 2003, he became the first Republican governor of Georgia since Benjamin F. Conley served during Reconstruction in the 1870s....
, Lieutenant Governor
Lieutenant Governor of Georgia
The Lieutenant Governor of Georgia is a constitutional officer of the state, elected to a 4-year term by popular vote. Unlike some states, the lieutenant governor is elected on a separate ticket from the state Governor....
Casey Cagle
Casey Cagle
Lowell S. "Casey" Cagle is an American politician currently serving as the 11th Lieutenant Governor of Georgia. He is a member of the Republican Party, a conservative, and a former member of the General Assembly in the U.S. state of Georgia. In 2006, Cagle defeated political activist Ralph...
, and Speaker of the House Glenn Richardson
Glenn Richardson
Glenn Richardson is the former Speaker of the Georgia House of Representatives, in the U.S. state of Georgia. Following a suicide attempt, he announced in 2009 that he would resign as Speaker effective Jan. 1, 2010, and he resigned as a member of the House on Jan...
announced a plan that would remove almost all authority from GDOT and the legislature and put it under themselves in a new State Transportation Authority. This would merge the Georgia Regional Transportation Authority
Georgia Regional Transportation Authority
The Georgia Regional Transportation Authority or GRTA is a government agency in the U.S. state of Georgia...
(GRTA) and State Road and Tollway Authority
State Road and Tollway Authority
The State Road and Tollway Authority is a government agency of the U.S. state of Georgia. It is responsible for financing transportation initiatives and operating the state's only current toll road, the Georgia 400 extension. SRTA collects tolls on the southern portion of the expressway, at a...
(SRTA) together, leaving GDOT only to maintain roads. (Eliminating GDOT entirely would require an amendment
Constitutional amendment
A constitutional amendment is a formal change to the text of the written constitution of a nation or state.Most constitutions require that amendments cannot be enacted unless they have passed a special procedure that is more stringent than that required of ordinary legislation...
to the state constitution.) On February 26, the GDOT board retaliated against chairwoman Gena Evans (who had been picked by Perdue) by firing her.

The state previously had a system under the governor rather than the legislature, in which he could (and often did) withhold highway funds from electoral district
Electoral district
An electoral district is a distinct territorial subdivision for holding a separate election for one or more seats in a legislative body...
s represented by his political opponents. This system of political corruption
Political corruption
Political corruption is the use of legislated powers by government officials for illegitimate private gain. Misuse of government power for other purposes, such as repression of political opponents and general police brutality, is not considered political corruption. Neither are illegal acts by...
and payback
Payback
Payback may refer to:*Payback period, the period of time required for the return on an investment*Revenge*Operation Payback, an ongoing hacker operation*Payback , a 1999 film, starring Mel Gibson; remake of the 1967 film Point Blank...
was reform
Reform
Reform means to put or change into an improved form or condition; to amend or improve by change of color or removal of faults or abuses, beneficial change, more specifically, reversion to a pure original state, to repair, restore or to correct....
ed in 1963.