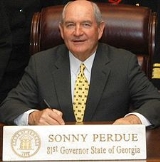 Perdue and his wife, Mary, were married in 1972. They have four children (two boys and two girls) and ten grandchildren (five boys and five girls, the most recent granddaughter was born on June 18, 2008 and the Governor made an announcement via official press release), and have also been foster parents for eight children.

In addition to flying, Perdue is also an avid sportsman.

Perdue made a cameo appearance
Cameo appearance
A cameo role or cameo appearance is a brief appearance of a known person in a work of the performing arts, such as plays, films, video games and television...
as an East Carolina
East Carolina Pirates
The East Carolina Pirates are the intercollegiate sports teams representing East Carolina University in Greenville, North Carolina. All varsity-level sports teams sponsored by the university compete in NCAA Division I as a member of Conference USA...
football coach in the movie We Are Marshall
We Are Marshall
We Are Marshall is a 2006 American drama film directed by Joseph McGinty Nichol about the aftermath of the 1970 plane crash that killed 37 football players on the Marshall University Thundering Herd football team as well as five coaches, two athletic trainers, the athletic director, 25 boosters and...
, large portions of which were filmed in Georgia.

Perdue was elected in 1991, 1994.and 1996, serving as his party's leader in the Senate, from 1994 to 1997, and as president pro tempore
Pro tempore
Pro tempore , abbreviated pro tem or p.t., is a Latin phrase which best translates to "for the time being" in English. This phrase is often used to describe a person who acts as a locum tenens in the absence of a superior, such as the President pro tempore of the United States Senate.Legislative...
.

He switched party affiliation from Democratic to Republican in 1998 and was re-elected to the Senate as a Republican. He also won re-election in 2000.

Perdue was re-elected to a second term in the 2006 general election
Georgia gubernatorial election, 2006
The 2006 Georgia Gubernatorial Election was held on November 7, 2006. The primary election was held on July 18. Governor Sonny Perdue was re-elected to his second term; he is the first Republican Governor of Georgia since the end of Reconstruction. Currently Republicans control both houses of the...
. His Democratic opponent was Lieutenant Governor Mark Taylor
Mark Taylor (politician)
Mark Fletcher Taylor is an American politician and member of the Democratic Party. He served two terms between 1999 to 2007 as the tenth Lieutenant Governor of Georgia...
. Libertarian Garrett Michael Hayes
Garrett Michael Hayes
Garrett Michael Hayes is a U.S. politician from Georgia. He was the Libertarian Party of Georgia's candidate for governor in both 2002 and 2006.He was born in California to screenwriter John Michael Hayes and Mildred "Mel" Hayes...
was also on the ballot. Perdue won handily, with nearly 58% of the vote. Perdue was constitutionally ineligible to seek a third consecutive term as Governor in 2010
Georgia gubernatorial election, 2010
The 2010 Georgia gubernatorial election was held on November 2, 2010. Incumbent Republican Governor Sonny Perdue was term-limited and unable to seek re-election. Primary elections for the Republican and Democratic parties took place on July 20, with a Republican runoff on August 10. The...
.

Perdue's main focus in office has been on reforming state government, and improving education. Perdue has advocated reforms designed to cut waste in government, most notably the sale of surplus vehicles and real estate. (Prior to Perdue's becoming governor, no state agency had even compiled an inventory of what assets the state owned, much less managed them.

In education, Perdue has focused on returning decision-making to the local level. Since Perdue took office, Georgia briefly moved out of last place in SAT scores; though it returned to last place in 2005, in 2006 Georgia rose to 46th place. The high school class of 2006 recorded the sharpest drop in SAT scores in 31 years.

Having won office after promising to let the citizens of Georgia vote to determine their flag, Perdue signed legislation for a flag referendum in 2004. The choices given to Georgia voters were a modified version of the 1879 Georgia flag that had been used as the state's official banner since 2003 or the version of the flag created in 2001 by the Roy Barnes
Roy Barnes
Roy Eugene Barnes served as the 80th Governor of Georgia from January 1999 until January 2003. Barnes was also a candidate for Governor of Georgia in the 2010 election....
administration. (The nickname of this flag was the Barnes flag or Barnes rag). Perdue angered some Georgians when the 1956 flag was not a choice on the ballot after promising throughout his campaign that the '56 flag design would appear in any referendum. However, Perdue was faced with a Democratic House that would not consider having the 1956 flag on the referendum and he needed support for the new tobacco tax he wanted to pass.

According to a March 5, 2008, proclamation by Governor Perdue, "Among those who served the Confederacy were many African-Americans, both free and slave, who saw action in the Confederate armed forces in many combat roles. According to the Georgia government's website on Confederate History Month, they also participated in the manufacture of products for the war effort, built naval ships, and provided military assistance and relief efforts..."

As of September 2007, Governor Perdue remained relatively popular. Perdue had a 56% approval rating, while 35% disapproved, according to Strategic Vision.

In mid-2003, Perdue purchased 101 acre (0.40873286 km²) of land next to his Houston County
Houston County, Georgia
Houston County is a county located in the U.S. state of Georgia. It was created on May 15, 1821, as one of five huge counties, later reduced in the formation of Bibb, Crawford, Pike, Macon and Peach counties. As of the 2000 census, the population is 110,765...
home, for $303,000, after negotiating directly with the owner. The purchase was done using a limited liability company named Maryson LLC, a corporation formed on July 23, 2003. Maryson's registered agent was Stephan Holcomb, a Houston County dentist. Perdue appointed Holcomb, a neighbor of the governor's sister in Houston County, to the state Board of Dentistry in 2003. The lawyer who organized Maryson LLC was state representative Larry O'Neal (R-Warner Robins), the chairman of the Ways & Means committee of the House. Perdue paid the 2003 tax bill on the property after it was acquired by Maryson, Houston County tax records show. In May 2004, the land was transferred from Maryson to Perdue's own name. The transfer price was recorded at $305,000. Maryson was dissolved on July 9, 2005, a year after the sale. Perdue did not disclose the property or any interest on his financial disclosure forms for calendar years 2003 and 2004, as required by Georgia law. Five days after Maryson was incorporated in 2003, O'Neal also incorporated a partnership for Perdue and his wife, Mary, called Perdue Plantation LLC, according to the Secretary of State's Office. This partnership also was not listed on Perdue's 2004 financial disclosure report. The Secretary of State's Office said an official is required to report ownership or a fiduciary position in a company.

In November 2007, while Georgia suffered from one of the worst droughts in several decades, Perdue, along with lawmakers and local ministers, prayed for rain on the steps of the state Capitol. This came shortly after Alabama
Alabama
Alabama is a state located in the southeastern region of the United States. It is bordered by Tennessee to the north, Georgia to the east, Florida and the Gulf of Mexico to the south, and Mississippi to the west. Alabama ranks 30th in total land area and ranks second in the size of its inland...
Governor Bob Riley
Bob Riley
Bob Riley may refer to:* Bob Riley, 52nd Governor of Alabama* Bob C. Riley, acting Governor of Arkansas for 11 days in 1975* Bob Riley , sports car designer and founder of Riley Technologies...
issued a proclamation declaring a week in July as "Days of Prayer for Rain" to "humbly ask for His blessings and to hold us steady in times of difficulty." The Atlanta Freethought Society opposed the rain prayer saying in a statement, "The governor can pray when he wants to. What he can't do is lead prayers in the name of the people of Georgia."