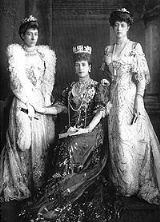 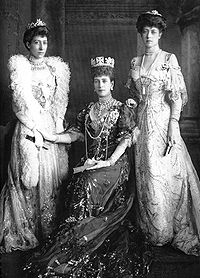 Part of the British
United Kingdom
The United Kingdom of Great Britain and Northern IrelandIn the United Kingdom and Dependencies, other languages have been officially recognised as legitimate autochthonous languages under the European Charter for Regional or Minority Languages...
Crown Jewels
Crown Jewels of the United Kingdom
The collective term Crown Jewels denotes the regalia and vestments worn by the sovereign of the United Kingdom during the coronation ceremony and at other state functions...
, the George IV State Diadem or Diamond Diadem was made in 1820 by the firm Rundell, Bridge and Rundell for the coronation of King George IV
George IV of the United Kingdom
George IV was the King of the United Kingdom of Great Britain and Ireland and also of Hanover from the death of his father, George III, on 29 January 1820 until his own death ten years later...
. It was designed to encircle the King's velvet Cap of Estate that he wore in the procession to Westminster Abbey
Westminster Abbey
The Collegiate Church of St Peter at Westminster, popularly known as Westminster Abbey, is a large, mainly Gothic church, in the City of Westminster, London, United Kingdom, located just to the west of the Palace of Westminster. It is the traditional place of coronation and burial site for English,...
. The diadem
Diadem (personal wear)
A diadem is a type of crown, specifically an ornamental headband worn by Eastern monarchs and others as a badge of royalty. The word derives from the Greek "διάδημα" , "band" or "fillet", from "διαδέω" , "I bind round", or "I fasten"....
includes 1333 diamond
Diamond
In mineralogy, diamond is an allotrope of carbon, where the carbon atoms are arranged in a variation of the face-centered cubic crystal structure called a diamond lattice. Diamond is less stable than graphite, but the conversion rate from diamond to graphite is negligible at ambient conditions...
s weighing 325.75 carats (65.2 g), and 169 pearls along its base. Its design features rose
Rose
A rose is a woody perennial of the genus Rosa, within the family Rosaceae. There are over 100 species. They form a group of erect shrubs, and climbing or trailing plants, with stems that are often armed with sharp prickles. Flowers are large and showy, in colours ranging from white through yellows...
s, thistles and shamrock
Shamrock
The shamrock is a three-leafed old white clover. It is known as a symbol of Ireland. The name shamrock is derived from Irish , which is the diminutive version of the Irish word for clover ....
s, the symbols of England
England
England is a country that is part of the United Kingdom. It shares land borders with Scotland to the north and Wales to the west; the Irish Sea is to the north west, the Celtic Sea to the south west, with the North Sea to the east and the English Channel to the south separating it from continental...
, Scotland
Scotland
Scotland is a country that is part of the United Kingdom. Occupying the northern third of the island of Great Britain, it shares a border with England to the south and is bounded by the North Sea to the east, the Atlantic Ocean to the north and west, and the North Channel and Irish Sea to the...
and Ireland
Ireland
Ireland is an island to the northwest of continental Europe. It is the third-largest island in Europe and the twentieth-largest island on Earth...
respectively.