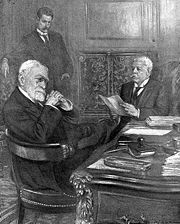 Jean-Baptiste Bienvenu Martin (July 22, 1847 – December 10, 1943) was a French
French people
The French are a nation that share a common French culture and speak the French language as a mother tongue. Historically, the French population are descended from peoples of Celtic, Latin and Germanic origin, and are today a mixture of several ethnic groups...
Radical leader and cabinet officer. He was born at Saint-Bris-le-Vineux
Saint-Bris-le-Vineux
Saint-Bris-le-Vineux is a commune in the Yonne department in Burgundy in north-central France.It lies near Auxerre.-See also:* Saint-Bris AOC, a white wine from the area around Saint-Bris-le-Vineux, made from Sauvignon variety grapes....
(Yonne
Yonne
Yonne is a French department named after the Yonne River. It is one of the four constituent departments of Burgundy in eastern France and its prefecture is Auxerre. Its official number is 89....
), and was educated in the law. He held an underprefecture, entered the Council of State, and in 1894 became director under the Minister of the Colonies
Minister of Overseas France
The Minister of Overseas France is a cabinet member in the Government of France responsible for overseeing French overseas departments and territories .The position is currently held by Brice Hortefeux, who is also the Minister of the Interior...
. He was an unsuccessful senatorial candidate for Yonne in 1897; was elected deputy for Auxerre
Auxerre
Auxerre is a commune in the Bourgogne region in north-central France, between Paris and Dijon. It is the capital of the Yonne department.Auxerre's population today is about 45,000...
in that year; was reelected in 1898 and 1902; and in 1905 became Senator for Yonne. In the Chamber
French Senate
The Senate is the upper house of the Parliament of France, presided over by a president.The Senate enjoys less prominence than the lower house, the directly elected National Assembly; debates in the Senate tend to be less tense and generally enjoy less media coverage.-History:France's first...
he supported the Waldeck-Rousseau and the Combes
Émile Combes
Émile Combes was a French statesman who led the Bloc des gauches's cabinet from June 1902 – January 1905.-Biography:Émile Combes was born in Roquecourbe, Tarn. He studied for the priesthood, but abandoned the idea before ordination. His anti-clericalism would later lead him into becoming a...
ministries, and advocated the separation of church and state. In 1904 he organized the new Radical group of the Left
Left-wing politics
In politics, Left, left-wing and leftist generally refer to support for social change to create a more egalitarian society...
. In 1905-06 he held the portfolio of Public Instruction
Minister of National Education (France)
The Ministry of National Education, Youth, and Sport , or simply "Minister of National Education," as the title has changed no small number of times in the course of the Fifth Republic) is the French government cabinet member charged with running France's public educational system and with the...
in the Rouvier
Maurice Rouvier
Maurice Rouvier was a French statesman.He was born in Aix-en-Provence, and spent his early career in business at Marseille. He supported Léon Gambetta's candidature there in 1867, and in 1870 he founded an anti-imperial journal, L'Egalité. Becoming secretary general of the prefecture of...
cabinet; he was Minister of Justice
Minister of Justice (France)
The Ministry of Justice is controlled by the French Minister of Justice , a top-level cabinet position in the French government. The current Minister of Justice is Michel Mercier...
in the Doumergue
Gaston Doumergue
Pierre-Paul-Henri-Gaston Doumergue was a French politician of the Third Republic.Doumergue came from a Protestant family. Beginning as a Radical, he turned more towards the political right in his old age. He served as Prime Minister from 9 December 1913 to 2 June 1914...
cabinet in 1913-14, and in the first Vivandi cabinet organized in June, 1914; and when the War in Europe
World War I
World War I , which was predominantly called the World War or the Great War from its occurrence until 1939, and the First World War or World War I thereafter, was a major war centred in Europe that began on 28 July 1914 and lasted until 11 November 1918...
broke out in 1914, he became Minister of Labor
Minister of Social Affairs (France)
The Minister of Social Affairs and Employment The Minister of Social Affairs and Employment The Minister of Social Affairs and Employment (French: Ministre des Affaires sociales et de l'emploi is a cabinet member in the Government of France. The position was originally known as Minister of Labor...
in the second Viviani
René Viviani
Jean Raphaël Adrien René Viviani was a French politician of the Third Republic, who served as Prime Minister for the first year of World War I. He was born in Sidi Bel Abbès, in French Algeria. In France he sought to protect the rights of socialists and trade union workers.-Biography:His...
cabinet, formed August 26 of that year.