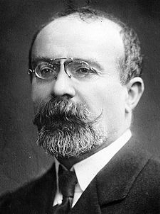 Encyclopedia
Jean Louis Barthou was a French politician of the Third Republic
French Third Republic
The French Third Republic was the republican government of France from 1870, when the Second French Empire collapsed due to the French defeat in the Franco-Prussian War, to 1940, when France was overrun by Nazi Germany during World War II, resulting in the German and Italian occupations of France...
.

He was born in Oloron-Sainte-Marie
Oloron-Sainte-Marie
Oloron-Sainte-Marie is a commune in the Pyrénées-Atlantiques department in south-western France. The town of Oloron-Sante-Marie is positioned at the junction of two rivers and has a population of approximately 12,000. While not spectacular, it is a pleasant looking town, with an ancient quarter,...
, Pyrénées-Atlantiques, and served as Deputy
Chamber of Deputies of France
Chamber of Deputies was the name given to several parliamentary bodies in France in the nineteenth and twentieth centuries:* 1814–1848 during the Bourbon Restoration and the July Monarchy, the Chamber of Deputies was the Lower chamber of the French Parliament, elected by census suffrage.*...
from that constituency. He was an authority on trade union history and law. Barthou was Prime Minister
Prime Minister of France
The Prime Minister of France in the Fifth Republic is the head of government and of the Council of Ministers of France. The head of state is the President of the French Republic...
in 1913, and held ministerial office 13 other times.

Barthou served as Foreign Minister in 1934. He was the primary figure behind the Franco-Soviet Treaty of Mutual Assistance
Franco-Soviet Treaty of Mutual Assistance
The Franco–Soviet Treaty of Mutual Assistance was a bilateral pact between the two countries with the aim of containing Nazi Germany's aggression in 1935. It was pursued by Louis Barthou, who was the French Foreign Minister but he was assassinated before negotiations were finished...
of 1935, though it was signed by his successor, Pierre Laval
Pierre Laval
Pierre Laval was a French politician. He was four times President of the council of ministers of the Third Republic, twice consecutively. Following France's Armistice with Germany in 1940, he served twice in the Vichy Regime as head of government, signing orders permitting the deportation of...
.

As Foreign Minister, Barthou met King Alexander I of Yugoslavia
Alexander I of Yugoslavia
Alexander I , also known as Alexander the Unifier was the first king of the Kingdom of Yugoslavia as well as the last king of the Kingdom of Serbs, Croats and Slovenes .-Childhood:...
during his visit to Marseille
Marseille
Marseille , known in antiquity as Massalia , is the second largest city in France, after Paris, with a population of 852,395 within its administrative limits on a land area of . The urban area of Marseille extends beyond the city limits with a population of over 1,420,000 on an area of...
in October 1934. On 9 October, Alexander was shot and killed by Vlado Chernozemski
Vlado Chernozemski
Vlado Chernozemski , born Velichko Dimitrov Kerin , was a Bulgarian revolutionary.Chernozemski also entered the region of Vardar Macedonia with IMRO bands and participated in more than 15 battles with the Serbian police....
, who was also shot and killed on the spot by the police escort. Barthou was also wounded, and bled to death from a severed humeral artery
Posterior humeral circumflex artery
The posterior humeral circumflex artery arises from the axillary artery at the lower border of the subscapularis, and runs posteriorally with the axillary nerve through the quadrangular space.It winds around the neck of the humerus and is distributed to the Deltoid muscle and shoulder-joint,...
(he was not treated until it was too late). The assassination ended the career of Préfet
Préfet
A prefect in France is the State's representative in a department or region. Sub-prefects are responsible for the subdivisions of departments, arrondissements...
Jouhannaud of Marseille.

In 1957, the East German newspaper Neues Deutschland
Neues Deutschland
Neues Deutschland is a national German daily newspaper. It was the official party newspaper of the Socialist Unity Party of Germany , which governed the German Democratic Republic , and as such served as one of the party's most important organs...
("New Germany") published supposed correspondence between Hermann Göring
Hermann Göring
Hermann Wilhelm Göring, was a German politician, military leader, and a leading member of the Nazi Party. He was a veteran of World War I as an ace fighter pilot, and a recipient of the coveted Pour le Mérite, also known as "The Blue Max"...
and Hans Speidel
Hans Speidel
Hans Speidel: Born in Metzingen, was a German general during World War II and the first German NATO Commander during the Cold War.- 1914–1945 :...
. In 1934, Speidel was an assistant to the German military attaché in Paris; in 1957 he was a high-ranking NATO commander. According to the supposed correspondence, the death of Barthou was intentional, and the assassination was planned and prepared by Germans with Hitler
Adolf Hitler
Adolf Hitler was an Austrian-born German politician and the leader of the National Socialist German Workers Party , commonly referred to as the Nazi Party). He was Chancellor of Germany from 1933 to 1945, and head of state from 1934 to 1945...
's personal approval. The story was repeated in a book and in the film Unternehmen Teutonenschwert ("Operation Teutonic Sword"). This claim has been disputed as propaganda.