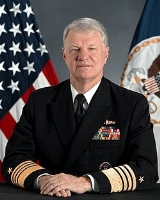 Roughead graduated from high school at Valley Forge Military Academy (Wayne, Pennsylvania
Wayne, Pennsylvania
Wayne is an unincorporated community located on the Main Line, centered in Delaware County, Pennsylvania, United States. While the center of Wayne is in Radnor Township, Wayne extends into both Tredyffrin Township in Chester County and Upper Merion Township in Montgomery County...
) in 1969. He is a 1973 graduate of the United States Naval Academy
United States Naval Academy
The United States Naval Academy is a four-year coeducational federal service academy located in Annapolis, Maryland, United States...
and a Surface Warfare Officer. His initial assignment was in the Weapons Department aboard the . This was followed by duty as Executive Officer on the patrol gunboats and , the former home-ported in Naples
Naples
Naples is a city in Southern Italy, situated on the country's west coast by the Gulf of Naples. Lying between two notable volcanic regions, Mount Vesuvius and the Phlegraean Fields, it is the capital of the region of Campania and of the province of Naples...
, Italy
Italy
Italy , officially the Italian Republic languages]] under the European Charter for Regional or Minority Languages. In each of these, Italy's official name is as follows:;;;;;;;;), is a unitary parliamentary republic in South-Central Europe. To the north it borders France, Switzerland, Austria and...
. He was the commissioning Chief Engineer aboard the and Executive Officer on the .

Tours ashore include assignments as Flag Lieutenant to Commander, Naval Surface Force, U.S. Atlantic Fleet
U.S. Atlantic Fleet
The United States Fleet Forces Command is an Atlantic Ocean theater-level component command of the United States Navy that provides naval resources that are under the operational control of the United States Northern Command...
; the Surface Warfare Analyst at the Navy's Office of Program Appraisal; Administrative Aide to the Secretary of the Navy; Executive Assistant to the Commander-in-Chief, U.S. Pacific Command; Commandant, United States Naval Academy; the Department of the Navy's Chief of Legislative Affairs; and most recently, Deputy Commander, U.S. Pacific Command.

Roughead was the commissioning Commanding Officer of the Aegis destroyer , and, upon assuming command of the cruiser , he became the first naval officer to command both classes of Aegis ships. While he was in command, Port Royal was awarded a Meritorious Unit Commendation
Meritorious Unit Commendation
The Meritorious Unit Commendation is a mid-level unit award of the United States military which is awarded to any military command which displays exceptionally meritorious conduct in the performance of outstanding service, heroic deeds, or valorous actions....
and received the Golden Anchor Award for excellence in retention and crew support programs. He was Commander, Cruiser Destroyer Group Two and the Carrier Battle Group, deploying to the Persian Gulf
Persian Gulf
The Persian Gulf, in Southwest Asia, is an extension of the Indian Ocean located between Iran and the Arabian Peninsula.The Persian Gulf was the focus of the 1980–1988 Iran-Iraq War, in which each side attacked the other's oil tankers...
and Mediterranean Sea
Mediterranean Sea
The Mediterranean Sea is a sea connected to the Atlantic Ocean surrounded by the Mediterranean region and almost completely enclosed by land: on the north by Anatolia and Europe, on the south by North Africa, and on the east by the Levant...
. His latest assignment afloat was as Commander, U.S. Second Fleet and Commander, NATO Striking Fleet Atlantic and Commander, Naval Forces North Fleet East in Norfolk, Virginia
Norfolk, Virginia
Norfolk is an independent city in the Commonwealth of Virginia in the United States. With a population of 242,803 as of the 2010 Census, it is Virginia's second-largest city behind neighboring Virginia Beach....
; he was nominated to head the Fleet Forces Command on March 19, 2007.

On September 2, 2005, Roughead was a keynote speaker at the End of WWII Commemoration aboard the battleship Memorial on Ford Island
Ford Island
Ford Island is located in the middle of Pearl Harbor, Hawaii. It is connected to the main island by the Ford Island Bridge. Before the bridge was built, Ford Island could only be reached by a ferry boat which ran at hourly intervals for cars and foot passengers. The island houses several naval...
in Hawaii
Hawaii
Hawaii is the newest of the 50 U.S. states , and is the only U.S. state made up entirely of islands. It is the northernmost island group in Polynesia, occupying most of an archipelago in the central Pacific Ocean, southwest of the continental United States, southeast of Japan, and northeast of...
.

Roughead is also a distinguished recipient of the "Bob Hope Five Star Award for Distinguished Service to America."