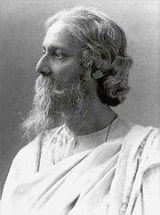 Overview
Rabindranath Tagore sobriquet Gurudev, was a Bengali
Bengali people
The Bengali people are an ethnic community native to the historic region of Bengal in South Asia. They speak Bengali , which is an Indo-Aryan language of the eastern Indian subcontinent, evolved from the Magadhi Prakrit and Sanskrit languages. In their native language, they are referred to as বাঙালী...
polymath
Polymath
A polymath is a person whose expertise spans a significant number of different subject areas. In less formal terms, a polymath may simply be someone who is very knowledgeable...
who reshaped his region's literature
Bengali literature
Bengali literature is literary works written in Bengali language particularly from Bangladesh and the Indian provinces of West Bengal and Tripura. The history of Bengali literature traces back hundreds of years while it is impossible to separate the literary trends of the two Bengals during the...
and music
Music of Bengal
The music of Bengal, also referred to as Bangla music, comprises a long tradition of religious and secular song-writing over a period of almost a millennium...
. Author of Gitanjali
Gitanjali
Gitanjali is a collection of 103 English poems, largely translations, of the Bengali poet Rabindranath Tagore.This volume became very famous in the West, and was widely translated....
and its "profoundly sensitive, fresh and beautiful verse", he became the first non-European Nobel laureate by earning the 1913 Prize in Literature
Nobel Prize in Literature
Since 1901, the Nobel Prize in Literature has been awarded annually to an author from any country who has, in the words from the will of Alfred Nobel, produced "in the field of literature the most outstanding work in an ideal direction"...
. In translation his poetry was viewed as spiritual and mercurial; his seemingly mesmeric persona, floccose locks, and empyreal garb garnered him a prophet-like aura in the West.

What are the reviews of rabindranath tagore's "The Artist"? may I see a copy of this short story?

The truth comes as conqueror only because we have lost the art of receiving it as guest.

The Fourfold Way of India (1924); this has become paraphrased as "Truth comes as conqueror only to those who have lost the art of receiving it as friend."

God, the Great Giver, can open the whole universe to our gaze in the narrow space of a single land.

My debts are large, my failures great, my shame secret and heavy; yet I come to ask for my good, I quake in fear lest my prayer be granted.

I thought that my invincible power would hold the world captive, leaving me in a freedom undisturbed. Thus night and day I worked at the chain with huge fires and cruel hard strokes. When at last the work was done and the links were complete and unbreakable, I found that it held me in its grip.

When old words die out on the tongue, new melodies break forth from the heart; and where the old tracks are lost, new country is revealed with its wonders.

The smile that flickers on baby's lips when he sleeps— does anybody know where it was born? Yes, there is a rumor that a young pale beam of a crescent moon touched the edge of a vanishing autumn cloud, and there the smile was first born in the dream of a dew-washed morning.

In this playhouse of infinite forms I have had my play, and here have I caught sight of him that is formless.

All the great utterances of man have to be judged not by the letter but by the spirit — the spirit which unfolds itself with the growth of life in history.