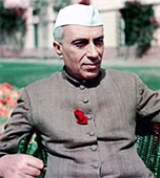 Overview
Jawaharlal Nehru often referred to with the epithet of Panditji, was an Indian statesman
Statesman
A statesman is usually a politician or other notable public figure who has had a long and respected career in politics or government at the national and international level. As a term of respect, it is usually left to supporters or commentators to use the term...
who became the first Prime Minister
Prime Minister of India
The Prime Minister of India , as addressed to in the Constitution of India — Prime Minister for the Union, is the chief of government, head of the Council of Ministers and the leader of the majority party in parliament...
of independent India (1947–64) and became noted for his “neutralist” policies in foreign affairs. He was also one of the principal leaders of India’s independence movement
Indian independence movement
The term Indian independence movement encompasses a wide area of political organisations, philosophies, and movements which had the common aim of ending first British East India Company rule, and then British imperial authority, in parts of South Asia...
in the 1930s and ’40s. Nehru was elected by the Indian National Congress
Indian National Congress
The Indian National Congress is one of the two major political parties in India, the other being the Bharatiya Janata Party. It is the largest and one of the oldest democratic political parties in the world. The party's modern liberal platform is largely considered center-left in the Indian...
to assume office as independent India's first Prime Minister, and re-elected when the Congress Party won India's first general election in 1951 and 1952
Indian general election, 1951
General elections to the first Lok Sabha since independence were held in India were held between 25 October 1951 and 21 February 1952. The Indian National Congress stormed into power with 364 of the 489 seat. With this, India's grand old party managed to secure 45 per cent of the total votes...
.

Why nehru keeps rose in his pocket?

Why jawaharlal wear the roae in the his pocket

Why Nehru keep the Rose in his pocket, i need what is the reason behind this.
More

Most of us seldom take the trouble to think. It is a troublesome and fatiguing process and often leads to uncomfortable conclusions. But crises and deadlocks when they occur have at least this advantage, that they force us to think.

Because we have sought to cover up past evil, though it still persists, we have been powerless to check the new evil of today. Evil unchecked grows, Evil tolerated poisons the whole system. And because we have tolerated our past and present evils, international affairs are poisoned and law and justice have disappeared from them.

If in the modern world wars have unfortunately to be fought (and they do, it seems) then they must be stopped at the first possible moment, otherwise they corrupt us, they create new problems and make our future even more uncertain. That is more than morality; it's sense.