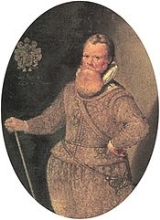 Encyclopedia
Frederick de Houtman or Frederik de Houtman, was a Dutch
Netherlands
The Netherlands is a constituent country of the Kingdom of the Netherlands, located mainly in North-West Europe and with several islands in the Caribbean. Mainland Netherlands borders the North Sea to the north and west, Belgium to the south, and Germany to the east, and shares maritime borders...
explorer who sailed along the Western coast of Australia
Australia
Australia , officially the Commonwealth of Australia, is a country in the Southern Hemisphere comprising the mainland of the Australian continent, the island of Tasmania, and numerous smaller islands in the Indian and Pacific Oceans. It is the world's sixth-largest country by total area...
en route to Batavia
Jakarta
Jakarta is the capital and largest city of Indonesia. Officially known as the Special Capital Territory of Jakarta, it is located on the northwest coast of Java, has an area of , and a population of 9,580,000. Jakarta is the country's economic, cultural and political centre...
.

He assisted fellow Dutch navigator Pieter Dirkszoon Keyser
Pieter Dirkszoon Keyser
Pieter Dirkszoon Keyser , a.k.a. Petrus Theodori, was a Dutch navigator who mapped the southern sky....
with astronomical
Astronomy
Astronomy is a natural science that deals with the study of celestial objects and phenomena that originate outside the atmosphere of Earth...
observations during his first expedition from Holland to the East Indies
East Indies
East Indies is a term used by Europeans from the 16th century onwards to identify what is now known as Indian subcontinent or South Asia, Southeastern Asia, and the islands of Oceania, including the Malay Archipelago and the Philippines...
in 1595-1597.

During subsequent expeditions he added further stars to the list of those observed by Keyser. Between them the constellation
Constellation
In modern astronomy, a constellation is an internationally defined area of the celestial sphere. These areas are grouped around asterisms, patterns formed by prominent stars within apparent proximity to one another on Earth's night sky....
s at the bottom of this article are credited to them as discoverors.

De Houtman was the elder brother of Cornelis de Houtman
Cornelis de Houtman
Cornelis de Houtman , brother of Frederick de Houtman, was a Dutch explorer who discovered a new sea route from Europe to Indonesia and managed to begin the Dutch spice trade...
who in a second expedition in 1598-1599 was killed. Frederick was imprisoned by the Sultan
Sultan
Sultan is a title with several historical meanings. Originally, it was an Arabic language abstract noun meaning "strength", "authority", "rulership", and "dictatorship", derived from the masdar سلطة , meaning "authority" or "power". Later, it came to be used as the title of certain rulers who...
of Aceh
Aceh
Aceh is a special region of Indonesia, located on the northern tip of the island of Sumatra. Its full name is Daerah Istimewa Aceh , Nanggroë Aceh Darussalam and Aceh . Past spellings of its name include Acheh, Atjeh and Achin...
in northern Sumatra
Sumatra
Sumatra is an island in western Indonesia, westernmost of the Sunda Islands. It is the largest island entirely in Indonesia , and the sixth largest island in the world at 473,481 km2 with a population of 50,365,538...
, but made good use of his two years in prison by studying the local Malay language
Malay language
Malay is a major language of the Austronesian family. It is the official language of Malaysia , Indonesia , Brunei and Singapore...
and making astronomical observations.

In 1603, after his return to Holland, Frederick published his stellar observations in an appendix to his dictionary and grammar of the Malayan and Malagasy
Madagascar
The Republic of Madagascar is an island country located in the Indian Ocean off the southeastern coast of Africa...
languages.

In 1619 he, in the VOC ship Dordrecht and Jacob d'Edel, in another VOC ship Amsterdam, sighted land on the Australian coast near present day Perth
Perth, Western Australia
Perth is the capital and largest city of the Australian state of Western Australia and the fourth most populous city in Australia. The Perth metropolitan area has an estimated population of almost 1,700,000....
which they called d'Edelsland. After sailing northwards along the coast he encountered and only narrowly avoided a group of shoals, subsequently called the Houtman Abrolhos
Houtman Abrolhos
The Houtman Abrolhos is a chain of 122 islands, and associated coral reefs, in the Indian Ocean off the west coast of Australia. Nominally located at , it lies about eighty kilometres west of Geraldton, Western Australia...
. Houtman then made landfall in the region known as Eendrachtsland which previous explorer Dirk Hartog
Dirk Hartog
Dirk Hartog was a 17th century Dutch sailor and explorer. Dirk Hartog's expedition was the third European group to land on Australian soil. He was the first to leave behind an artifact to record his visit, the Hartog plate. His name is sometimes alternatively spelled Dirck Hartog or Dierick...
had encountered. In his journal, Houtman identified these coasts with Marco Polo
Marco Polo
Marco Polo was a Venetian merchant traveler from the Venetian Republic whose travels are recorded in Il Milione, a book which did much to introduce Europeans to Central Asia and China. He learned about trading whilst his father and uncle, Niccolò and Maffeo, travelled through Asia and apparently...
's land of Beach, or Locach, as shown on maps of the time such as that of Conrnelis van Linschoten
Linschoten
Linschoten is a town in the Dutch province of Utrecht. It is a part of the municipality of Montfoort, and lies about 3 km southeast of Woerden.In 2001, the town of Linschoten had 3588 inhabitants...
.

De Houtman died on 21 October 1627 in Alkmaar
Alkmaar
Alkmaar is a municipality and a city in the Netherlands, in the province of Noord Holland. Alkmaar is well known for its traditional cheese market. For tourists, it is a popular cultural destination.-History:...
, Holland, Dutch Republic.
The source of this article is wikipedia, the free encyclopedia.  The text of this article is licensed under the GFDL.