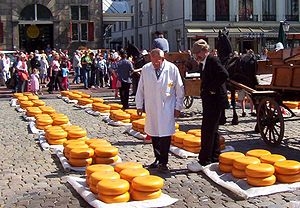 Gouda (ˈɣʌu̯daˑ; population 70,828 in 2009) is a city and municipality in the western Netherlands
Netherlands
The Netherlands is a constituent country of the Kingdom of the Netherlands, located mainly in North-West Europe and with several islands in the Caribbean. Mainland Netherlands borders the North Sea to the north and west, Belgium to the south, and Germany to the east, and shares maritime borders...
, in the province of South Holland
South Holland
South Holland is a province situated on the North Sea in the western part of the Netherlands. The provincial capital is The Hague and its largest city is Rotterdam.South Holland is one of the most densely populated and industrialised areas in the world...
. Gouda, which was granted city rights
City rights in the Netherlands
City rights are a medieval phenomenon in the history of the Low Countries. A liegelord, usually a count, duke or similar member of high nobility, granted a settlement he owned certain town privileges that settlements without city rights did not have....
in 1272, is famous for its Gouda cheese, smoking pipes, and 15th-century city hall.

In the Middle Ages, a settlement was founded at the location of the current city by the Van der Goude family, who built a fortified castle
Castle
A castle is a type of fortified structure built in Europe and the Middle East during the Middle Ages by European nobility. Scholars debate the scope of the word castle, but usually consider it to be the private fortified residence of a lord or noble...
alongside the banks of the Gouwe River, from which the family and the city took its name. The area, originally marshland, developed over the course of two centuries. By 1225, a canal was linked to the Gouwe and its estuary was transformed into a harbour. Gouda's array of historic churches and other buildings makes it a very popular day trip destination.

Around the year 1100, the area where Gouda now is located was swampy and covered with a peat forest, crossed by small creeks such as the Gouwe
Gouwe
Gouwe is a village in the Dutch province of North Holland. It is a part of the municipality of Opmeer, and lies about 11 km northwest of Hoorn....
. Along the shores of this stream near the current market and city hall, peat
Peat
Peat is an accumulation of partially decayed vegetation matter or histosol. Peat forms in wetland bogs, moors, muskegs, pocosins, mires, and peat swamp forests. Peat is harvested as an important source of fuel in certain parts of the world...
harvesting began in the 11th and 12th centuries. In 1139, the name Gouda is first mentioned in a statement from the Bishop of Utrecht
Roman Catholic Archdiocese of Utrecht
The Archdiocese of Utrecht is an archdiocese of the Catholic Church in the Netherlands. The archdiocese is the metropolitan for 6 suffragans, the dioceses of Breda, Groningen-Leeuwarden, Haarlem-Amsterdam, Roermond, Rotterdam, and 's-Hertogenbosch....
.

In the 13th century, the Gouwe was connected to the Oude Rijn (Old Rhine) by means of a canal and its mouth at the Hollandse IJssel
Hollandse IJssel
The Hollandse IJssel is a branch of the Rhine delta that flows westward from Nieuwegein on river Lek through IJsselstein, Gouda and Capelle aan den IJssel to Krimpen aan den IJssel, where it ends in the Nieuwe Maas. Another branch called Enge IJssel flows southwest from Nieuwegein...
was developed into a harbour. Castle Gouda was built to protect this harbour. This shipping route was used for trade between Flanders
Flanders
Flanders is the community of the Flemings but also one of the institutions in Belgium, and a geographical region located in parts of present-day Belgium, France and the Netherlands. "Flanders" can also refer to the northern part of Belgium that contains Brussels, Bruges, Ghent and Antwerp...
and France with Holland and the Baltic Sea
Baltic Sea
The Baltic Sea is a brackish mediterranean sea located in Northern Europe, from 53°N to 66°N latitude and from 20°E to 26°E longitude. It is bounded by the Scandinavian Peninsula, the mainland of Europe, and the Danish islands. It drains into the Kattegat by way of the Øresund, the Great Belt and...
. In 1272, Floris V, Count of Holland
Floris V, Count of Holland
Count Floris V of Holland and Zeeland , "der Keerlen God" , is one of the most important figures of the first, native dynasty of Holland . His life was documented in detail in the Rijmkroniek by Melis Stoke, his chronicler...
, granted city rights
City rights in the Netherlands
City rights are a medieval phenomenon in the history of the Low Countries. A liegelord, usually a count, duke or similar member of high nobility, granted a settlement he owned certain town privileges that settlements without city rights did not have....
to Gouda, which by then had become an important location. City-canals or gracht
Gracht
The word gracht is a Dutch term that is encountered by English-speaking people when confronted with Dutch art , Dutch history or tourism...
en were dug and served as transport ways through the town.

Great fires in 1361 and 1438 destroyed the city. In 1572, the city was occupied by Les Gueux (Dutch rebels against the Spanish King) who also committed arson and destruction. In 1577 the demolition of Castle Gouda began.

In the last quarter of the 16th century, Gouda had serious economic problems. It recovered in the first half of the 17th century and even prospered between 1665 and 1672. But its economy collapsed again when war broke out in 1672 and the plague decimated the city in 1673, even affecting the pipe industry. After 1700, Gouda enjoyed a period of progress and prosperity until 1730. Then another recession followed, resulting in a long period of decline that lasted well into the 19th century. Gouda was one of the poorest cities in the country during that period: the terms "Goudaner" and "beggar" were considered synonymous.

Starting in 1830, demolition of the city walls began. The last city gate was torn down in 1854. Only from the second half of the 19th century onward did Gouda start to profit from an improved economic condition. New companies, such as Stearine Kaarsenfabriek (Stearine Candle Factory) and Machinale Garenspinnerij (Mechanized Yarn Spinnery), acted as the impetus to its economy. In 1855, the railway Gouda-Utrecht
Utrecht (city)
Utrecht city and municipality is the capital and most populous city of the Dutch province of Utrecht. It is located in the eastern corner of the Randstad conurbation, and is the fourth largest city of the Netherlands with a population of 312,634 on 1 Jan 2011.Utrecht's ancient city centre features...
began to operate. In the beginning of the 20th century, large-scale development began, extending the city beyond its moats. First the new neighbourhoods Korte Akkeren, Kort Haarlem and Kadebuurt were built, followed by Oosterwei, Bloemendaal, and Goverwelle after World War II.

From 1940 on, back-filling of the city moats and city-canals, the gracht
Gracht
The word gracht is a Dutch term that is encountered by English-speaking people when confronted with Dutch art , Dutch history or tourism...
en, began: the Nieuwe Haven, Raam, Naaierstraat, and Achter de Vismarkt. But because of protests from city dwellers and revised policies of city planners, Gouda did not continue back-filling moats and city-canals, now considered historically valuable. In 1944, the railway station was damaged during an Allied bombardment, killing 8 and wounding 10 persons. This bombardment was intended to destroy the railroad connecting The Hague and Rotterdam to Utrecht.

Gouda is world famous for its Gouda cheese, which is still traded in its cheese market, held each Thursday. It is further well-known for the fabrication of candles, smoking pipes, and syrup waffles. Gouda used to have a considerable linen
Linen
Linen is a textile made from the fibers of the flax plant, Linum usitatissimum. Linen is labor-intensive to manufacture, but when it is made into garments, it is valued for its exceptional coolness and freshness in hot weather....
industry and a number of beer breweries.

The world famous Gouda cheese is not made in the city itself but in the surrounding region. It derives its name from being traded in Gouda where the city council imposes stringent quality controls.

Since 1977, the weekly pig
Domestic pig
The domestic pig is a domesticated animal that traces its ancestry to the wild boar, and is considered a subspecies of the wild boar or a distinct species in its own right. It is likely the wild boar was domesticated as early as 13,000 BC in the Tigris River basin...
market, the largest in the Netherlands, is no longer held in the city.

Currently, there are over 32,000 jobs in the city, mainly in commercial and healthcare services.

Gouda is served by two railway stations: Gouda
Gouda railway station
Gouda is a railway station in Gouda, The Netherlands. The station opened on 21 May 1855 when the Nederlandsche Rhijnspoorweg-Maatschappij opened the Utrecht–Rotterdam railway...
, and Gouda Goverwelle
Gouda Goverwelle railway station
Gouda Goverwelle is a railway station located on the Utrecht–Rotterdam railway in the Goverwelle area of Gouda in the Netherlands. The railway station, which opened in 1993, consists of two island platforms.-Train services:...
. The main railway station is served by Intercity services to The Hague
The Hague
The Hague is the capital city of the province of South Holland in the Netherlands. With a population of 500,000 inhabitants , it is the third largest city of the Netherlands, after Amsterdam and Rotterdam...
, Rotterdam
Rotterdam
Rotterdam is the second-largest city in the Netherlands and one of the largest ports in the world. Starting as a dam on the Rotte river, Rotterdam has grown into a major international commercial centre...
and Utrecht
Utrecht
Utrecht is a city in the Netherlands.The name may also refer to:* Utrecht , of which Utrecht is the capital* Utrecht , including the city of Utrecht* Bishopric of Utrecht* Roman Catholic Archdiocese of Utrecht...
and local trains to Amsterdam
Amsterdam
Amsterdam is the largest city and the capital of the Netherlands. The current position of Amsterdam as capital city of the Kingdom of the Netherlands is governed by the constitution of August 24, 1815 and its successors. Amsterdam has a population of 783,364 within city limits, an urban population...
and Alphen aan den Rijn
Alphen aan den Rijn
Alphen aan den Rijn is a town and municipality in the western Netherlands, in the province of South Holland, between Leiden and Utrecht. The town is situated on the banks of the river Oude Rijn , where the river Gouwe branches off. The municipality had a population of 72,674 in 2010, and covers an...
/Leiden.

Gouda is twinned
Town twinning
Twin towns and sister cities are two of many terms used to describe the cooperative agreements between towns, cities, and even counties in geographically and politically distinct areas to promote cultural and commercial ties.- Terminology :...
with: