Encyclopedia
Forsterite is the magnesium rich end-member of the olivine
Olivine
The mineral olivine is a magnesium iron silicate with the formula 2SiO4. It is a common mineral in the Earth's subsurface but weathers quickly on the surface....
solid solution
Solid solution
A solid solution is a solid-state solution of one or more solutes in a solvent. Such a mixture is considered a solution rather than a compound when the crystal structure of the solvent remains unchanged by addition of the solutes, and when the mixture remains in a single homogeneous phase...
series. Forsterite crystallizes in the orthorhombic system (space group
Space group
In mathematics and geometry, a space group is a symmetry group, usually for three dimensions, that divides space into discrete repeatable domains.In three dimensions, there are 219 unique types, or counted as 230 if chiral copies are considered distinct...
Pbnm) with cell parameters a 4.75 Å
Ångström
The angstrom or ångström, is a unit of length equal to 1/10,000,000,000 of a meter . Its symbol is the Swedish letter Å....
(0.475 nm
Nanometre
A nanometre is a unit of length in the metric system, equal to one billionth of a metre. The name combines the SI prefix nano- with the parent unit name metre .The nanometre is often used to express dimensions on the atomic scale: the diameter...
), b 10.20 Å (1.020 nm) and c 5.98 Å (0.598 nm).

Forsterite is associated with igneous
Igneous rock
Igneous rock is one of the three main rock types, the others being sedimentary and metamorphic rock. Igneous rock is formed through the cooling and solidification of magma or lava...
and metamorphic rock
Metamorphic rock
Metamorphic rock is the transformation of an existing rock type, the protolith, in a process called metamorphism, which means "change in form". The protolith is subjected to heat and pressure causing profound physical and/or chemical change...
s and has also been found in meteorite
Meteorite
A meteorite is a natural object originating in outer space that survives impact with the Earth's surface. Meteorites can be big or small. Most meteorites derive from small astronomical objects called meteoroids, but they are also sometimes produced by impacts of asteroids...
s. In 2005 it was also found in comet
Comet
A comet is an icy small Solar System body that, when close enough to the Sun, displays a visible coma and sometimes also a tail. These phenomena are both due to the effects of solar radiation and the solar wind upon the nucleus of the comet...
ary dust returned by the Stardust probe. In 2011 it was observed as tiny crystals in the dusty clouds of gas around a forming star.

Two polymorphs of forsterite are known: wadsleyite
Wadsleyite
Wadsleyite is a high-pressure polymorph of olivine, an orthorhombic mineral found in the Peace River meteorite in Alberta, Canada. In the phase transformations from Mg2SiO4-Fe2SiO4 , olivine is transformed to wadsleyite β-Mg2SiO4 and then to a spinel-structured γ-Mg2SiO4 with increasing pressure...
(also orthorhombic) and ringwoodite
Ringwoodite
Ringwoodite is a high-pressure polymorph of olivine, and it is stable at high temperatures and pressures like those in the Earth's mantle near 600 km depth. This mineral was first identified in the Tenham Meteorites in 1969, and it is inferred to be present in large quantity in the earth’s...
(isometric). Both are mainly known from meteorites.

Peridot
Peridot
-Chemistry:The chemical composition of peridot is 2SiO4, with Mg in greater quantities than Fe.-Etymology:The origin of the name "peridot" is uncertain...
is the gemstone
Gemstone
A gemstone or gem is a piece of mineral, which, in cut and polished form, is used to make jewelry or other adornments...
variety of forsterite olivine.

Forsterite reacts with quartz
Quartz
Quartz is the second-most-abundant mineral in the Earth's continental crust, after feldspar. It is made up of a continuous framework of SiO4 silicon–oxygen tetrahedra, with each oxygen being shared between two tetrahedra, giving an overall formula SiO2. There are many different varieties of quartz,...
to form the orthopyroxene mineral enstatite
Enstatite
Enstatite is the magnesium endmember of the pyroxene silicate mineral series enstatite - ferrosilite . The magnesium rich members of the solid solution series are common rock-forming minerals found in igneous and metamorphic rocks...
in the following reaction:

Pure forsterite is composed of magnesium, oxygen and silicon. The chemical formula is Mg2SiO4. Forsterite, fayalite
Fayalite
Fayalite is the iron-rich end-member of the olivine solid-solution series. In common with all minerals in the olivine group, fayalite crystallizes in the orthorhombic system with cell parameters a 4.82 Å, b 10.48 Å and c Å 6.09.Iron rich olivine is a relatively common constituent of acidic and...
(Fe2SiO4) and tephroite
Tephroite
Tephroite is a non-metallic manganese silicate mineral with the formula, Mn2SiO4.It was first described for an occurrence at the Sterling Hill Mine and Franklin, New Jersey, USA. It occurs in iron-manganese ore deposits and their related skarns. It also occurs in metamorphosed manganese-rich...
(Mn2SiO4) are the end-members of the olivine solid solution series; other elements such as Mn, Ni, and Ca substitute for Fe and Mg in olivine, but only in minor proportions in natural occurrences. Other minerals such as monticellite
Monticellite
Monticellite and kirschsteinite are gray silicate minerals of the olivine group with compositions CaMgSiO4 and CaFeSiO4, respectively. Most monticellites have the pure magnesium end-member composition but rare ferroan monticellites and magnesio-kirschsteinite are found with between 30 and 75 mol.%...
(CaMgSiO4), an uncommon calcium-rich mineral, share the olivine structure, but solid solution between olivine and these other minerals is limited. Monticellite is found in contact metamorphosed dolomite
Dolomite
Dolomite is a carbonate mineral composed of calcium magnesium carbonate CaMg2. The term is also used to describe the sedimentary carbonate rock dolostone....
s.

Forsterite-rich olivine is the most abundant mineral in the mantle
Mantle (geology)
The mantle is a part of a terrestrial planet or other rocky body large enough to have differentiation by density. The interior of the Earth, similar to the other terrestrial planets, is chemically divided into layers. The mantle is a highly viscous layer between the crust and the outer core....
above a depth of about 400 km; pyroxene
Pyroxene
The pyroxenes are a group of important rock-forming inosilicate minerals found in many igneous and metamorphic rocks. They share a common structure consisting of single chains of silica tetrahedra and they crystallize in the monoclinic and orthorhombic systems...
s are also important minerals in this upper part of the mantle. Although pure forsterite does not occur in igneous rock
Igneous rock
Igneous rock is one of the three main rock types, the others being sedimentary and metamorphic rock. Igneous rock is formed through the cooling and solidification of magma or lava...
s, dunite
Dunite
Dunite is an igneous, plutonic rock, of ultramafic composition, with coarse-grained or phaneritic texture. The mineral assemblage is greater than 90% olivine, with minor amounts of other minerals such as pyroxene, chromite and pyrope. Dunite is the olivine-rich end-member of the peridotite group...
often contains olivine with forsterite contents at least as Mg-rich as Fo92 (92 % forsterite – 8 % fayalite); common peridotite
Peridotite
A peridotite is a dense, coarse-grained igneous rock, consisting mostly of the minerals olivine and pyroxene. Peridotite is ultramafic, as the rock contains less than 45% silica. It is high in magnesium, reflecting the high proportions of magnesium-rich olivine, with appreciable iron...
contains olivine typically at least as Mg-rich as Fo88. Forsterite-rich olivine is a common crystallization product of mantle-derived magma
Magma
Magma is a mixture of molten rock, volatiles and solids that is found beneath the surface of the Earth, and is expected to exist on other terrestrial planets. Besides molten rock, magma may also contain suspended crystals and dissolved gas and sometimes also gas bubbles. Magma often collects in...
. Olivine in mafic
Mafic
Mafic is an adjective describing a silicate mineral or rock that is rich in magnesium and iron; the term is a portmanteau of the words "magnesium" and "ferric". Most mafic minerals are dark in color and the relative density is greater than 3. Common rock-forming mafic minerals include olivine,...
and ultramafic rocks typically is rich in the forsterite end-member.

Forsterite is mainly composed of the anion SiO44- and the cation Mg2+ in a molar ratio 1:2. Silicon is the central atom in the SiO44- anion. Each oxygen atom is bonded to the silicon by a single covalent bond. The four oxygen atoms have a partial negative charge because of the covalent bond with silicon. Therefore, oxygen atoms need to stay far from each other in order to reduce the repulsive force between them. The best geometry to reduce the repulsion is a tetrahedral shape. The cations occupy two different octahedral sites which are M1 and M2 and form ionic bonds with the silicate anions. M1 and M2 are slightly different. M2 site is larger and more regular than M1 as shown in Fig. 1. The packing in forsterite structure is dense. The space group of this structure is Pbnm and the point group is 2/m 2/m 2/m which is an orthorhombic crystal structure. 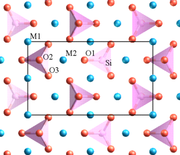 This structure of forsterite can form a complete solid solution
Solid solution
A solid solution is a solid-state solution of one or more solutes in a solvent. Such a mixture is considered a solution rather than a compound when the crystal structure of the solvent remains unchanged by addition of the solutes, and when the mixture remains in a single homogeneous phase...
by replacing the magnesium with iron. Iron can form two different cations which are Fe2+ and Fe3+. The iron(II) ion has the same charge as magnesium ion and it has a very similar ionic radius to magnesium. Consequently, Fe2+ can replace the magnesium ion in the olivine structure.

One of the important factors that can increase the portion of forsterite in the olivine solid solution is the ratio of iron(II) ions to iron(III) ions in the magma. As the iron(II) ions oxidize and become iron(III) ions, iron(III) ions cannot form olivine because of their 3+ charge. The occurrence of forsterite due to the oxidation of iron was observed in the Stromboli
Stromboli
Stromboli is a small island in the Tyrrhenian Sea, off the north coast of Sicily, containing one of the three active volcanoes in Italy. It is one of the eight Aeolian Islands, a volcanic arc north of Sicily. This name is a corruption of the Ancient Greek name Strongulē which was given to it...
volcano
Volcano
2. Bedrock3. Conduit 4. Base5. Sill6. Dike7. Layers of ash emitted by the volcano8. Flank| 9. Layers of lava emitted by the volcano10. Throat11. Parasitic cone12. Lava flow13. Vent14. Crater15...
in Italy. As the volcano fractured, gases and volatiles escaped from the magma chamber. The crystallization temperature of the magma increased as the gases escaped. Because iron(II) ions were oxidized in the Stromboli magma, little iron(II) was available to form Fe-rich olivine (fayalite
Fayalite
Fayalite is the iron-rich end-member of the olivine solid-solution series. In common with all minerals in the olivine group, fayalite crystallizes in the orthorhombic system with cell parameters a 4.82 Å, b 10.48 Å and c Å 6.09.Iron rich olivine is a relatively common constituent of acidic and...
). Hence, the crystallizing olivine was Mg-rich, and igneous rocks rich in forsterite were formed.

Forsterite was first described in 1824 for an occurrence at Mte. Somma, Vesuvius, Italy
Italy
Italy , officially the Italian Republic languages]] under the European Charter for Regional or Minority Languages. In each of these, Italy's official name is as follows:;;;;;;;;), is a unitary parliamentary republic in South-Central Europe. To the north it borders France, Switzerland, Austria and...
. It was named by Armand Lévy in 1824 for the English naturalist and mineral collector Jacob Forster.
The source of this article is wikipedia, the free encyclopedia.  The text of this article is licensed under the GFDL.