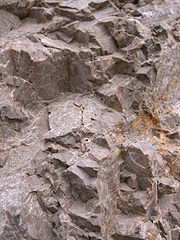 Dolostone or dolomite rock is a sedimentary
Sedimentary rock
Sedimentary rock are types of rock that are formed by the deposition of material at the Earth's surface and within bodies of water. Sedimentation is the collective name for processes that cause mineral and/or organic particles to settle and accumulate or minerals to precipitate from a solution....
carbonate rock
Carbonate rock
Carbonate rocks are a class of sedimentary rocks composed primarily of carbonate minerals. The two major types are limestone, which is composed of calcite or aragonite and dolostone, which is composed of the mineral dolomite .Calcite can be either dissolved by groundwater or precipitated by...
that contains a high percentage of the mineral
Mineral
A mineral is a naturally occurring solid chemical substance formed through biogeochemical processes, having characteristic chemical composition, highly ordered atomic structure, and specific physical properties. By comparison, a rock is an aggregate of minerals and/or mineraloids and does not...
dolomite
Dolomite
Dolomite is a carbonate mineral composed of calcium magnesium carbonate CaMg2. The term is also used to describe the sedimentary carbonate rock dolostone....
. In old U.S.G.S. publications it was referred to as magnesian limestone
Limestone
Limestone is a sedimentary rock composed largely of the minerals calcite and aragonite, which are different crystal forms of calcium carbonate . Many limestones are composed from skeletal fragments of marine organisms such as coral or foraminifera....
. Most dolostone formed as a magnesium
Magnesium
Magnesium is a chemical element with the symbol Mg, atomic number 12, and common oxidation number +2. It is an alkaline earth metal and the eighth most abundant element in the Earth's crust and ninth in the known universe as a whole...
replacement of limestone or lime
Lime (mineral)
Lime is a general term for calcium-containing inorganic materials, in which carbonates, oxides and hydroxides predominate. Strictly speaking, lime is calcium oxide or calcium hydroxide. It is also the name for a single mineral of the CaO composition, occurring very rarely...
mud prior to lithification. It is resistant to erosion
Erosion
Erosion is when materials are removed from the surface and changed into something else. It only works by hydraulic actions and transport of solids in the natural environment, and leads to the deposition of these materials elsewhere...
and can either contain bedded layers or be unbedded. It is less soluble than limestone in weakly acidic groundwater
Groundwater
Groundwater is water located beneath the ground surface in soil pore spaces and in the fractures of rock formations. A unit of rock or an unconsolidated deposit is called an aquifer when it can yield a usable quantity of water. The depth at which soil pore spaces or fractures and voids in rock...
, but it can still develop solution features over time.

The term dolostone was introduced to avoid confusion with the mineral dolomite. The usage of the term dolostone is controversial because the name dolomite
Dolomite
Dolomite is a carbonate mineral composed of calcium magnesium carbonate CaMg2. The term is also used to describe the sedimentary carbonate rock dolostone....
was first applied to the rock during the late 18th century and thus has technical precedence. The use of the term dolostone is not recommended by the Glossary of Geology published by the American Geological Institute
American Geological Institute
The American Geosciences Institute is a nonprofit federation of 45 geoscientific and professional associations that represents more than 100,000 geologists, geophysicists, and other earth scientists...
. It is, however, used in some geological publications.
The source of this article is wikipedia, the free encyclopedia.  The text of this article is licensed under the GFDL.