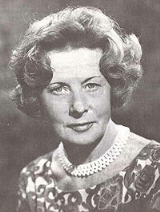 Significantly, the role exists only when in use; there can be a lengthy period between successive holders of the title.