Feijoada is a stew
Stew
A stew is a combination of solid food ingredients that have been cooked in liquid and served in the resultant gravy. Ingredients in a stew can include any combination of vegetables , meat, especially tougher meats suitable for slow-cooking, such as beef. Poultry, sausages, and seafood are also used...
of beans with beef
Beef
Beef is the culinary name for meat from bovines, especially domestic cattle. Beef can be harvested from cows, bulls, heifers or steers. It is one of the principal meats used in the cuisine of the Middle East , Australia, Argentina, Brazil, Europe and the United States, and is also important in...
and pork
Pork
Pork is the culinary name for meat from the domestic pig , which is eaten in many countries. It is one of the most commonly consumed meats worldwide, with evidence of pig husbandry dating back to 5000 BC....
, which is a typical from Brazilian Cuisine, is also typical in Angola
Angola
Angola, officially the Republic of Angola , is a country in south-central Africa bordered by Namibia on the south, the Democratic Republic of the Congo on the north, and Zambia on the east; its west coast is on the Atlantic Ocean with Luanda as its capital city...
, Mozambique
Mozambique
Mozambique, officially the Republic of Mozambique , is a country in southeastern Africa bordered by the Indian Ocean to the east, Tanzania to the north, Malawi and Zambia to the northwest, Zimbabwe to the west and Swaziland and South Africa to the southwest...
, Goa, India
Goa
Goa , a former Portuguese colony, is India's smallest state by area and the fourth smallest by population. Located in South West India in the region known as the Konkan, it is bounded by the state of Maharashtra to the north, and by Karnataka to the east and south, while the Arabian Sea forms its...
and other former Portuguese colonies. In Brazil, feijoada is considered by many as the national dish
National dish
A national dish is a dish, food or a drink that is considered to represent a particular country, nation or region.A dish can become a national dish for a variety of reasons. It can be the national dish because it is a staple daily food for the majority of the population. It can also be the national...
. Feijoada was brought to South America by the Portuguese, based in ancient Feijoada recipes from the Portuguese regions of Beira
Beira, Portugal
Beira was one of the six traditional provinces or "comarcas" of Portugal.-Administrative history:The medieval province of Beira was divided in 1832 into* Beira Alta Province* Beira Baixa ProvinceBeira Litoral...
, Estremadura
Estremadura Province (historical)
Estremadura Province is one of the six historical provinces of Portugal....
, and Trás-os-Montes
Trás-os-Montes (region)
Trás-os-Montes was one of the 13 regions of continental Portugal identified by geographer Amorim Girão, in a study published between 1927 and 1930.Together with Alto Douro it formed Trás-os-Montes e Alto Douro Province.- See also :...
. 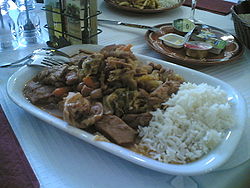 The basic ingredients of Portuguese feijoada are beans and fresh pork or beef. In northwest Portugal (chiefly Minho and Douro Litoral
Douro Litoral
Douro Litoral is a historical province of Portugal. It is centered on the city of Porto, now the capital of the Norte Region. Other important cities in the province are Vila Nova de Gaia, Matosinhos, Maia, Póvoa de Varzim, and the historically important Penafiel, Amarante, Feira, Vila do Conde.The...
), it is usually made with white bean
Common bean
Phaseolus vulgaris, the common bean, is an herbaceous annual plant domesticated independently in ancient Mesoamerica and the Andes, and now grown worldwide for its edible bean, popular both dry and as a green bean. The leaf is occasionally used as a leaf vegetable, and the straw is used for fodder...
s; in the northeast (Trás-os-Montes
Trás-os-Montes (region)
Trás-os-Montes was one of the 13 regions of continental Portugal identified by geographer Amorim Girão, in a study published between 1927 and 1930.Together with Alto Douro it formed Trás-os-Montes e Alto Douro Province.- See also :...
), it is generally prepared with red (kidney) beans, and includes other vegetables such as tomato
Tomato
The word "tomato" may refer to the plant or the edible, typically red, fruit which it bears. Originating in South America, the tomato was spread around the world following the Spanish colonization of the Americas, and its many varieties are now widely grown, often in greenhouses in cooler...
es, carrot
Carrot
The carrot is a root vegetable, usually orange in colour, though purple, red, white, and yellow varieties exist. It has a crisp texture when fresh...
s, and cabbage
Cabbage
Cabbage is a popular cultivar of the species Brassica oleracea Linne of the Family Brassicaceae and is a leafy green vegetable...
. The stew is best prepared over low heat in a thick clay pot.

Portuguese feijoada is usually served with rice and assorted sausages, such as chouriço, morcela (a blood sausage
Blood sausage
Black pudding, blood pudding or blood sausage is a type of sausage made by cooking blood or dried blood with a filler until it is thick enough to congeal when cooled. The dish exists in various cultures from Asia to Europe...
), farinheira
Farinheira
Farinheira is a Portuguese smoked sausage made mainly from wheat flour, pork fat and seasonings . Its original recipe did not contain pork fat; it was invented by the Jews during the 15th century to deceive the Portuguese Inquisition by making them believe that they were converted to Christianity...
, and others, which may or may not be cooked in the stew.

The Brazilian feijoada is prepared with black turtle beans (also white, pinto and red beans), a variety of salted
Salting
Salting may refer to:-People:*George Salting , Australian-born English art collector, who left the Salting Bequest, which included the**Salting Madonna , National Gallery, London-Other:...
pork and beef products, such as pork
Pork
Pork is the culinary name for meat from the domestic pig , which is eaten in many countries. It is one of the most commonly consumed meats worldwide, with evidence of pig husbandry dating back to 5000 BC....
trimmings (ears, tail, feet), bacon
Bacon
Bacon is a cured meat prepared from a pig. It is first cured using large quantities of salt, either in a brine or in a dry packing; the result is fresh bacon . Fresh bacon may then be further dried for weeks or months in cold air, boiled, or smoked. Fresh and dried bacon must be cooked before eating...
, smoked pork ribs
Pork ribs
Pork ribs are a cut of pork popular in North American and Asian cuisines. The ribcage of a domestic pig, meat and bones together, is cut into usable pieces, prepared by smoking, grilling, or baking – usually with a sauce, often barbecue – and then served....
, and at least two types of smoked sausage
Sausage
A sausage is a food usually made from ground meat , mixed with salt, herbs, and other spices, although vegetarian sausages are available. The word sausage is derived from Old French saussiche, from the Latin word salsus, meaning salted.Typically, a sausage is formed in a casing traditionally made...
and jerked beef (loin and tongue).

This stew is best prepared over low fire in a thick clay pot. The final dish has the beans and meat pieces barely covered by a dark purplish-brown broth. The taste is strong, moderately salty but not spicy, dominated by the flavors of black bean and meat stew.

In Brazil, feijoada is traditionally served with rice
Rice
Rice is the seed of the monocot plants Oryza sativa or Oryza glaberrima . As a cereal grain, it is the most important staple food for a large part of the world's human population, especially in East Asia, Southeast Asia, South Asia, the Middle East, and the West Indies...
, and accompanied by chopped fried collard greens
Collard greens
Collard greens are various loose-leafed cultivars of Brassica oleracea , the same species as cabbage and broccoli. The plant is grown for its large, dark-colored, edible leaves and as a garden ornamental, mainly in Brazil, Portugal, the southern United States, many parts of Africa, Montenegro,...
(couve mineira), lightly roasted coarse cassava
Cassava
Cassava , also called yuca or manioc, a woody shrub of the Euphorbiaceae native to South America, is extensively cultivated as an annual crop in tropical and subtropical regions for its edible starchy tuberous root, a major source of carbohydrates...
flour (farofa
Farofa
Farofa is a toasted manioc flour mixture, though variants are made with maize flour , and flavors can vary. It is eaten in South America and West Africa, especially in Brazil and Nigeria, where a variant is known as gari. It can be found commercially produced and packaged but is often prepared at...
) and peeled and sliced orange
Orange (fruit)
An orange—specifically, the sweet orange—is the citrus Citrus × sinensis and its fruit. It is the most commonly grown tree fruit in the world....
. Other common side dishes are boiled or deep-fried cassava, deep-fried banana
Banana
Banana is the common name for herbaceous plants of the genus Musa and for the fruit they produce. Bananas come in a variety of sizes and colors when ripe, including yellow, purple, and red....
s, and pork rinds (torresmo). A pot of hot pepper sauce is often provided on the side. The meal is often washed down with cachaça
Cachaça
Cachaça is a liquor made from fermented sugarcane.It is the most popular distilled alcoholic beverage in Brazil. It is also known as aguardente, pinga, caninha and many other names...
, caipirinha
Caipirinha
Caipirinha is Brazil's national cocktail, made with cachaça , sugar and lime. Cachaça is Brazil's most common distilled alcoholic beverage . Both rum and cachaça are made from sugarcane-derived products...
, or beer
Beer
Beer is the world's most widely consumed andprobably oldest alcoholic beverage; it is the third most popular drink overall, after water and tea. It is produced by the brewing and fermentation of sugars, mainly derived from malted cereal grains, most commonly malted barley and malted wheat...
.

Since it is a rather heavy dish that takes several hours to cook, feijoada is consumed in Brazil only occasionally, always at lunch time. Traditionally, restaurants will offer it as the "daily's special" only once or twice a week, usually on Wednesdays and Saturdays. However, some restaurants will serve feijoada all week long.

Other former territories of the Portuguese Empire
Portuguese Empire
The Portuguese Empire , also known as the Portuguese Overseas Empire or the Portuguese Colonial Empire , was the first global empire in history...
still retain the feijoada as a major typical dish of their respective cuisines. Angola
Angola
Angola, officially the Republic of Angola , is a country in south-central Africa bordered by Namibia on the south, the Democratic Republic of the Congo on the north, and Zambia on the east; its west coast is on the Atlantic Ocean with Luanda as its capital city...
n and São Tomean
São Tomé and Príncipe
São Tomé and Príncipe, officially the Democratic Republic of São Tomé and Príncipe, is a Portuguese-speaking island nation in the Gulf of Guinea, off the western equatorial coast of Central Africa. It consists of two islands: São Tomé and Príncipe, located about apart and about , respectively, off...
feijoadas add palm oil
Palm oil
Palm oil, coconut oil and palm kernel oil are edible plant oils derived from the fruits of palm trees. Palm oil is extracted from the pulp of the fruit of the oil palm Elaeis guineensis; palm kernel oil is derived from the kernel of the oil palm and coconut oil is derived from the kernel of the...
for flavouring.