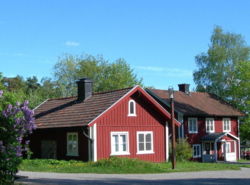 Falu red or Falun red is the name of a Swedish, deep red
Red
Red is any of a number of similar colors evoked by light consisting predominantly of the longest wavelengths of light discernible by the human eye, in the wavelength range of roughly 630–740 nm. Longer wavelengths than this are called infrared , and cannot be seen by the naked eye...
paint well known for its use on wooden cottage
Cottage
__toc__In modern usage, a cottage is usually a modest, often cozy dwelling, typically in a rural or semi-rural location. However there are cottage-style dwellings in cities, and in places such as Canada the term exists with no connotations of size at all...
s and barns. The paint originated from the copper mine at Falun
Falun
Falun is a city and the seat of Falun Municipality in Dalarna County, Sweden, with 36,447 inhabitants in 2005. It is also the capital of Dalarna County...
in Dalarna
Dalarna
', English exonym: Dalecarlia, is a historical province or landskap in central Sweden. Another English language form established in literature is the Dales. Places involving the element Dalecarlia exist in the United States....
, Sweden
Sweden
Sweden , officially the Kingdom of Sweden , is a Nordic country on the Scandinavian Peninsula in Northern Europe. Sweden borders with Norway and Finland and is connected to Denmark by a bridge-tunnel across the Öresund....
. The traditional colour remains popular today due to its effectiveness in preserving wood. In Finland, it is known as punamulta ("red earth") after the pigment, very finely divided hematite
Hematite
Hematite, also spelled as haematite, is the mineral form of iron oxide , one of several iron oxides. Hematite crystallizes in the rhombohedral system, and it has the same crystal structure as ilmenite and corundum...
. Since the binder is starch
Starch
Starch or amylum is a carbohydrate consisting of a large number of glucose units joined together by glycosidic bonds. This polysaccharide is produced by all green plants as an energy store...
, the paint is permeable to water.

The earliest evidence of its use dates from the 16th century. During the 17th century Falu red was commonly used on smaller wooden mansion
Mansion
A mansion is a very large dwelling house. U.S. real estate brokers define a mansion as a dwelling of over . A traditional European mansion was defined as a house which contained a ballroom and tens of bedrooms...
s, where it was intended to imitate buildings with brick
Brick
A brick is a block of ceramic material used in masonry construction, usually laid using various kinds of mortar. It has been regarded as one of the longest lasting and strongest building materials used throughout history.-History:...
facing. Except in bigger cities like Stockholm
Stockholm
Stockholm is the capital and the largest city of Sweden and constitutes the most populated urban area in Scandinavia. Stockholm is the most populous city in Sweden, with a population of 851,155 in the municipality , 1.37 million in the urban area , and around 2.1 million in the metropolitan area...
and Gothenburg
Gothenburg
Gothenburg is the second-largest city in Sweden and the fifth-largest in the Nordic countries. Situated on the west coast of Sweden, the city proper has a population of 519,399, with 549,839 in the urban area and total of 937,015 inhabitants in the metropolitan area...
, and in the far south of Sweden
Sweden
Sweden , officially the Kingdom of Sweden , is a Nordic country on the Scandinavian Peninsula in Northern Europe. Sweden borders with Norway and Finland and is connected to Denmark by a bridge-tunnel across the Öresund....
, wood was the dominating building material. In the Swedish cities and towns, buildings were often painted with Falu red until the early 19th century, when the authorities began to oppose use of the paint. At that point in time more and more wooden buildings in urban areas were either painted in lighter colours (e.g. yellow, white) or sided with stucco. The number of buildings made of bricks (with stucco) also increased. However Falu red saw a surge in popularity in the countryside during the 19th century, when also poorer farmer
Farmer
A farmer is a person engaged in agriculture, who raises living organisms for food or raw materials, generally including livestock husbandry and growing crops, such as produce and grain...
s and crofters began to paint their houses. Falu red is still widely used in the Swedish countryside. The common Finnish expression punainen tupa ja perunamaa "a red house and a potato field", referring to idyllic nuclear family life in a separate house, is a direct allusion to a country house painted in Falu red.
The actual colour may be different depending on how much the oxide is burnt, ranging from almost black to a bright, light red. Different tones of red have been popular at different times. Recently a mix giving a dark green colour, Falu Grön, has also been produced by mixing black and ochre
Ochre
Ochre is the term for both a golden-yellow or light yellow brown color and for a form of earth pigment which produces the color. The pigment can also be used to create a reddish tint known as "red ochre". The more rarely used terms "purple ochre" and "brown ochre" also exist for variant hues...
.

The paint consists of water
Water
Water is a chemical substance with the chemical formula H2O. A water molecule contains one oxygen and two hydrogen atoms connected by covalent bonds. Water is a liquid at ambient conditions, but it often co-exists on Earth with its solid state, ice, and gaseous state . Water also exists in a...
, rye
Rye
Rye is a grass grown extensively as a grain and as a forage crop. It is a member of the wheat tribe and is closely related to barley and wheat. Rye grain is used for flour, rye bread, rye beer, some whiskeys, some vodkas, and animal fodder...
flour
Flour
Flour is a powder which is made by grinding cereal grains, other seeds or roots . It is the main ingredient of bread, which is a staple food for many cultures, making the availability of adequate supplies of flour a major economic and political issue at various times throughout history...
, linseed oil
Linseed oil
Linseed oil, also known as flaxseed oil, is a clear to yellowish oil obtained from the dried ripe seeds of the flax plant . The oil is obtained by cold pressing, sometimes followed by solvent extraction...
and tailings
Tailings
Tailings, also called mine dumps, slimes, tails, leach residue, or slickens, are the materials left over after the process of separating the valuable fraction from the uneconomic fraction of an ore...
from the copper mines of Falun
Falun
Falun is a city and the seat of Falun Municipality in Dalarna County, Sweden, with 36,447 inhabitants in 2005. It is also the capital of Dalarna County...
which contain silicates iron oxides, copper
Copper
Copper is a chemical element with the symbol Cu and atomic number 29. It is a ductile metal with very high thermal and electrical conductivity. Pure copper is soft and malleable; an exposed surface has a reddish-orange tarnish...
compounds and zinc
Zinc
Zinc , or spelter , is a metallic chemical element; it has the symbol Zn and atomic number 30. It is the first element in group 12 of the periodic table. Zinc is, in some respects, chemically similar to magnesium, because its ion is of similar size and its only common oxidation state is +2...
. The current recipe was finalized in the 1920s. Aging Falu red will flake off, but restoration is easy since only brushing off of the loose flakes is required before repainting.

Houses and buildings in Scandinavia are usually painted white or yellow. The main reason is that red paint was the cheapest, so only the noble buildings of the farm were painted in other colors.