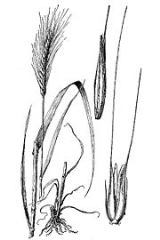 Overview
Rye is a grass
Poaceae
The Poaceae is a large and nearly ubiquitous family of flowering plants. Members of this family are commonly called grasses, although the term "grass" is also applied to plants that are not in the Poaceae lineage, including the rushes and sedges...
grown extensively as a grain and as a forage crop. It is a member of the wheat tribe (Triticeae
Triticeae
Triticeae is a tribe within the Pooideae subfamily of grasses that includes genera with many domesticated species. Major crop genera are found in this tribe including wheat , barley, and rye; crops in other genera include some for human consumption and others used for animal feed or rangeland...
) and is closely related to barley
Barley
Barley is a major cereal grain, a member of the grass family. It serves as a major animal fodder, as a base malt for beer and certain distilled beverages, and as a component of various health foods...
and wheat
Wheat
Wheat is a cereal grain, originally from the Levant region of the Near East, but now cultivated worldwide. In 2007 world production of wheat was 607 million tons, making it the third most-produced cereal after maize and rice...
. Rye grain is used for flour
Flour
Flour is a powder which is made by grinding cereal grains, other seeds or roots . It is the main ingredient of bread, which is a staple food for many cultures, making the availability of adequate supplies of flour a major economic and political issue at various times throughout history...
, rye bread
Rye bread
Rye bread is a type of bread made with various percentages of flour from rye grain. It can be light or dark in color, depending on the type of flour used and the addition of coloring agents, and is typically denser than bread made from wheat flour...
, rye beer
Rye beer
Rye beer refers to any beer in which rye is substituted for some portion of the barley malt.One example of this is roggenbier which is a specialty beer produced with up to sixty percent rye malt...
, some whiskeys, some vodka
Vodka
Vodka , is a distilled beverage. It is composed primarily of water and ethanol with traces of impurities and flavorings. Vodka is made by the distillation of fermented substances such as grains, potatoes, or sometimes fruits....
s, and animal fodder
Fodder
Fodder or animal feed is any agricultural foodstuff used specifically to feed domesticated livestock such as cattle, goats, sheep, horses, chickens and pigs. Most animal feed is from plants but some is of animal origin...
. It can also be eaten whole, either as boiled rye berries, or by being rolled, similar to rolled oats
Rolled oats
Rolled oats are traditionally oat groats that have been rolled into flat flakes under heavy rollers and then steamed and lightly toasted. The oat, like the other cereals, has a hard, inedible outer husk that must be removed before the grain can be eaten. After the outer husk has been removed from...
.

Rye is a cereal grain
Cereal
Cereals are grasses cultivated for the edible components of their grain , composed of the endosperm, germ, and bran...
and should not be confused with ryegrass
Ryegrass
Ryegrass is a genus of nine species of tufted grasses in the Pooideae subfamily of the Poaceae family. Also called tares , these plants are native to Europe, Asia and northern Africa, but are...
, which is used for lawns, pasture, and hay for livestock.
Rye is one of a number of species that grow wild in central and eastern Turkey, and adjacent areas.

Does rye have gluten in it. I can't eat wheat or gluten.

Is rye grass or a flower? -Kenna

what is rye made out of and where did it come from? -Kenna
More
x