An explosively formed penetrator (EFP), also known as an explosively formed projectile, a self-forging warhead, or a self-forging fragment, is a special type of shaped charge
Shaped charge
A shaped charge is an explosive charge shaped to focus the effect of the explosive's energy. Various types are used to cut and form metal, to initiate nuclear weapons, to penetrate armor, and in the oil and gas industry...
designed to penetrate armour
Armour
Armour or armor is protective covering used to prevent damage from being inflicted to an object, individual or a vehicle through use of direct contact weapons or projectiles, usually during combat, or from damage caused by a potentially dangerous environment or action...
effectively at standoff distance
Standoff distance
Standoff distance is a security measure that focused on preventing unscreened vehicles from approaching within a certain distance of a building. It is intended to deter truck bombs by making it more difficult for them to cause catastrophic damage. In the wake of the Oklahoma City bombing, many...
s. As the name suggests, the effect of the explosive charge is to deform a metal plate into a slug or rod shape and accelerate it toward a target. They were first developed during WWII.

A conventional shaped charge
Shaped charge
A shaped charge is an explosive charge shaped to focus the effect of the explosive's energy. Various types are used to cut and form metal, to initiate nuclear weapons, to penetrate armor, and in the oil and gas industry...
generally has a conical metal liner that projects a hypervelocity
Hypervelocity
The term hypervelocity usually refers to a very high velocity, approximately over 3,000 meters per second . In particular, it refers to velocities so high that the strength of materials upon impact is very small compared to inertial stresses. Thus, even metals behave like fluids under hypervelocity...
jet of metal able to penetrate to great depths into steel armour; in travel over some distance the jet breaks up along its length into particles that drift out of alignment, greatly diminishing its effectiveness at a distance.

An EFP, on the other hand, has a liner face in the shape of a shallow dish. The force of the blast molds the liner into any of a number of shapes, depending on the shape of the plate and how the explosive is detonated. Some sophisticated EFP warheads have multiple detonators that can be fired in different arrangements causing different types of waveform in the explosive, resulting in either a long-rod penetrator, an aerodynamic slug projectile, or multiple high-velocity fragments. A less sophisticated approach for changing the formation of an EFP is the use of wire-mesh in front of the liner: with the mesh in place the liner fragments into multiple penetrators.

In addition to single-penetrator EFPs (also called single EFPs or SEFPs), there are EFP warheads whose liners are designed to produce more than one penetrator; these are known as multiple EFPs, or MEFPs. The liner of an MEFP generally comprises a number of dimples that intersect each other at sharp angles. Upon detonation the liner fragments along these intersections to form up to dozens of small, generally spheroidal projectiles, producing an effect similar to that of a shotgun. The pattern of impacts on target can be finely controlled based on the design of the liner and the manner in which the explosive charge is detonated. A nuclear-driven MEFP was apparently proposed by a member of the JASON group in 1966 for terminal ballistic missile defense.

The (single) EFP generally remains intact and is therefore able to penetrate armour at a long range, delivering a wide spray of fragments of liner material and vehicle armour backspall into the vehicle's interior, injuring its crew and damaging other systems.

The penetration is proportional to the density of the liner metal; tantalum
Tantalum
Tantalum is a chemical element with the symbol Ta and atomic number 73. Previously known as tantalium, the name comes from Tantalus, a character in Greek mythology. Tantalum is a rare, hard, blue-gray, lustrous transition metal that is highly corrosion resistant. It is part of the refractory...
16,654 kg/m3, copper
Copper
Copper is a chemical element with the symbol Cu and atomic number 29. It is a ductile metal with very high thermal and electrical conductivity. Pure copper is soft and malleable; an exposed surface has a reddish-orange tarnish...
8,960 kg/m3, iron
Iron
Iron is a chemical element with the symbol Fe and atomic number 26. It is a metal in the first transition series. It is the most common element forming the planet Earth as a whole, forming much of Earth's outer and inner core. It is the fourth most common element in the Earth's crust...
7,874 kg/m3. Tantalum is preferable in delivery systems that have limitations in size, like the SADARM, which is delivered by a howitzer
Howitzer
A howitzer is a type of artillery piece characterized by a relatively short barrel and the use of comparatively small propellant charges to propel projectiles at relatively high trajectories, with a steep angle of descent...
. For other weapon systems where the size does not matter, a copper liner of double the calibre is used.

Extensive research is going on in the zone between jetting charges and EFPs, which combines the advantages of both types, resulting in very long stretched-rod EFPs for short-to-medium distances (because of the lack of aerostability) with improved penetration capability.

An EFP eight inches in diameter threw a seven-pound copper slug at Mach
Mach number
Mach number is the speed of an object moving through air, or any other fluid substance, divided by the speed of sound as it is in that substance for its particular physical conditions, including those of temperature and pressure...
6, or 2,000 meters per second. (A .50-caliber bullet, among the most devastating projectiles on the battlefield, weighs less than two ounces and has a muzzle velocity
Muzzle velocity
Muzzle velocity is the speed a projectile has at the moment it leaves the muzzle of the gun. Muzzle velocities range from approximately to in black powder muskets , to more than in modern rifles with high-performance cartridges such as the .220 Swift and .204 Ruger, all the way to for tank guns...
of 900 meters per second.).—Rick Atkinson, The Washington Post
The Washington Post
The Washington Post is Washington, D.C.'s largest newspaper and its oldest still-existing paper, founded in 1877. Located in the capital of the United States, The Post has a particular emphasis on national politics. D.C., Maryland, and Virginia editions are printed for daily circulation...

Use in improvised explosive devices 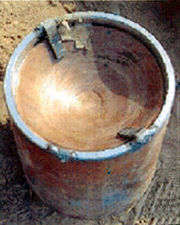 The charges are generally cylindrical, fabricated from commonly available metal pipe, with the forward end closed by a concave copper or steel disk-shaped liner to create a shaped charge. Explosive is loaded behind the metal liner to fill the pipe. Upon detonation, the explosive projects the liner to form a projectile.

Because they use explosives to form a solid copper penetrator instead of using an explosive blast or metal fragments, these charges are extremely dangerous, even to the new generation of mine-resistant
MRAP (armored vehicle)
A Mine Resistant Ambush Protected is a family of armored fighting vehicles design led by the United States Marine Corps in use by the United States Army, Navy, Air Force, and Special Operations Forces with the goal of surviving IED attacks and ambushes - prompted by US deaths in Iraq...
vehicles (which are made to withstand an anti-tank mine
Anti-tank mine
An anti-tank mine, , is a type of land mine designed to damage or destroy vehicles including tanks and armored fighting vehicles....
), and many tanks.

Often mounted on crash barriers at window level, they are placed along roadsides at choke points where vehicles must slow down, such as intersections and junctions. This gives the operator time to judge the moment to fire, when the vehicle is moving more slowly.

Detonation is controlled by cable
Cable
A cable is two or more wires running side by side and bonded, twisted or braided together to form a single assembly. In mechanics cables, otherwise known as wire ropes, are used for lifting, hauling and towing or conveying force through tension. In electrical engineering cables are used to carry...
, radio control
Radio control
Radio control is the use of radio signals to remotely control a device. The term is used frequently to refer to the control of model vehicles from a hand-held radio transmitter...
, TV or IR remote controls
Remote control
A remote control is a component of an electronics device, most commonly a television set, used for operating the television device wirelessly from a short line-of-sight distance.The remote control is usually contracted to remote...
, or remote arming with a passive infrared sensor, or via a pair of ordinary cell phones. EFPs can be deployed singly, in pairs, or in arrays, depending on the tactical situation
Ambush
An ambush is a long-established military tactic, in which the aggressors take advantage of concealment and the element of surprise to attack an unsuspecting enemy from concealed positions, such as among dense underbrush or behind hilltops...
.

At close standoff distance there is no need for the cone-tailed projectiles' aerodynamic stability, which means that the liner can be simplified.

SIM-EFPs are built from simple cut and bent steel bars, side by side, with explosives attached. Upon explosion it creates multiple projectiles spread out along the vehicles' length, which makes it more probable that the enemy troops inside the vehicle are hit. The construction also allows for longer timing errors, and makes it easier to hit fast moving vehicles.

The SIM-EFP is a modified version of the platter charge, but the projectiles are better optimized for armour penetration instead of demolition, and spread out perfectly for effective killing of armoured vehicles (optimized for long projectiles instead of a broad flat projectile).

The simplified EFP design also makes it easier for small groups of motivated individuals to build big EFPs that can penetrate a heavy battle tank or stationary high-value targets of virtually any sort.