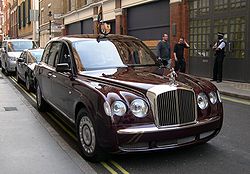 A civilian armored car is a security vehicle which made by replacing the windows of a standard vehicle (typically a limousine or SUV) with bulletproof glass
Bulletproof glass
Bulletproof glass is a type of strong but optically transparent material that is particularly resistant to being penetrated when struck by bullets, but is not completely impenetrable. It is usually made from a combination of two or more types of glass, one hard and one soft...
and inserting layers of armor plate
EN 1063
EN 1063, or CEN 1063, is a security glazing standard created by the European Committee for Standardization for measuring the protective strength of bullet-resistant glass...
into the body panels. Unlike a military armored car, which has armor plate mounted on the outside of the vehicle, a civilian armored car typically looks no different from a standard vehicle.

Civilian armored cars are either (in only a few cases) factory produced, such as the Audi A6
Audi A6
The Audi A6 is an executive car marketed by the German automaker Audi AG, now in its fourth generation. As the successor to the Audi 100, the A6 is manufactured in Neckarsulm, Germany – and is available in saloon, and wagon configurations, the latter marketed by Audi as the Avant.All generations...
and A8
Audi A8
The Audi A8 is a four-door, full-size, luxury sedan car manufactured and marketed by the German automaker Audi since 1994. Succeeding the Audi V8, the A8 has been offered with front wheel drive or permanent four-wheel drive, with multitronic or tiptronic automatic transmissions — and in short- and...
, Lincoln Town Car
Lincoln Town Car
The Lincoln Town Car is a full-size luxury sedan that was sold by the upscale Lincoln division of Ford Motor Company; it was produced from 1981 to the 2011 model years...
BPS, the Hyundai Equus
Hyundai Equus
The Hyundai Equus , known as the Hyundai Centennial in the Middle East, is an upscale full-size luxury car that serves as the flagship model of Hyundai Motor Company worldwide, named after the Latin word for "horse". The Hyundai Equus is the largest and most expensive sedan in the company's lineup...
, the BMW High Security series, or (in the majority of cases) retrofitted versions of series cars. A security vehicle is made by replacing the windows with bulletproof glass
Bulletproof glass
Bulletproof glass is a type of strong but optically transparent material that is particularly resistant to being penetrated when struck by bullets, but is not completely impenetrable. It is usually made from a combination of two or more types of glass, one hard and one soft...
and inserting layers of armor plate
EN 1063
EN 1063, or CEN 1063, is a security glazing standard created by the European Committee for Standardization for measuring the protective strength of bullet-resistant glass...
under the outer skin of the car, a labor-intensive process that generally takes a few weeks and most often costs upward of $100,000 USD. The makers usually leave the external appearance of the car unchanged, in order that it look as inconspicuous as possible. In most cases materials like Aramid (e.g. Twaron)
Aramid
Aramid fibers are a class of heat-resistant and strong synthetic fibers. They are used in aerospace and military applications, for ballistic rated body armor fabric and ballistic composites, in bicycle tires, and as an asbestos substitute. The name is a portmanteau of "aromatic polyamide"...
, HMPE (e.g. Dyneema)
Ultra high molecular weight polyethylene
Ultra-high-molecular-weight polyethylene , also known as high-modulus polyethylene or high-performance polyethylene , is a subset of the thermoplastic polyethylene. It has extremely long chains, with molecular weight numbering in the millions, usually between 2 and 6 million...
, composites
Composite material
Composite materials, often shortened to composites or called composition materials, are engineered or naturally occurring materials made from two or more constituent materials with significantly different physical or chemical properties which remain separate and distinct at the macroscopic or...
or ballistic stainless steel
Stainless steel
In metallurgy, stainless steel, also known as inox steel or inox from French "inoxydable", is defined as a steel alloy with a minimum of 10.5 or 11% chromium content by mass....
plates are used, and the increased mass is offset by a more powerful engine and brakes and stronger shock absorbers.

Besides the armor itself, many other protective modifications are available: automatic fire extinguisher
Fire extinguisher
A fire extinguisher or extinguisher, flame entinguisher is an active fire protection device used to extinguish or control small fires, often in emergency situations...
s, run-flat tires, an explosion-resistant fuel tank, remote starting of the car, pressure and temperature control of the tires, a siren or alarm, and an intercom between the exterior and interior of the car, and a PA system, so that the bodyguards inside the car can communicate via a megaphone to individuals outside the car. Sometimes the inside can be sealed or over-pressured, using its own air supply, to protect against poison gas or tear gas attacks. Civilian armored cars may have obvious armor protection, or they may be totally indistinguishable from an unarmored model. There are also armored variants of smaller cars, such as the VW Golf, to further conceal their function and capabilities. Large SUVs such as Suburbans
Chevrolet Suburban
Chevrolet offered a station wagon body, built on the 1/2 ton truck frame. This model was specifically built for National Guard units and Civilian Conservation Corps units. Much of the body was constructed from wood, and could seat up to eight occupants....
are sometimes used as armored vehicles.

Armored cars may be provided by governments for elected officials and senior officials who are at risk. In higher-risk areas including Iraq
Iraq
Iraq ; officially the Republic of Iraq is a country in Western Asia spanning most of the northwestern end of the Zagros mountain range, the eastern part of the Syrian Desert and the northern part of the Arabian Desert....
and Afghanistan, even regular officials and public servants may be protected with armored vehicles. Diplomatic missions and private military contractors
Private military company
A private military company or provides military and security services. These combatants are commonly known as mercenaries, though modern-day PMCs refer to their staff as security contractors, private military contractors or private security contractors, and refer to themselves as private military...
typically use armored cars as standard vehicles. As a side benefit, armored cars give occupants added protection from intrusion during a car accident
Car accident
A traffic collision, also known as a traffic accident, motor vehicle collision, motor vehicle accident, car accident, automobile accident, Road Traffic Collision or car crash, occurs when a vehicle collides with another vehicle, pedestrian, animal, road debris, or other stationary obstruction,...
. Due to the substantial weight of an armored car, drivers of these vehicles typically have specialized training in tactical driving. This training is provided by bodyguard
Bodyguard
A bodyguard is a type of security operative or government agent who protects a person—usually a famous, wealthy, or politically important figure—from assault, kidnapping, assassination, stalking, loss of confidential information, terrorist attack or other threats.Most important public figures such...
schools and by police and military units (e.g., the United States Secret Service
United States Secret Service
The United States Secret Service is a United States federal law enforcement agency that is part of the United States Department of Homeland Security. The sworn members are divided among the Special Agents and the Uniformed Division. Until March 1, 2003, the Service was part of the United States...
).
The source of this article is wikipedia, the free encyclopedia.  The text of this article is licensed under the GFDL.