The sets of even and odd numbers can be defined as following:


Arithmetic on even and odd numbers

The following laws can be verified using the properties of divisibility. They are a special case of rules in modular arithmetic
Modular arithmetic
In mathematics, modular arithmetic is a system of arithmetic for integers, where numbers "wrap around" after they reach a certain value—the modulus....
, and are commonly used to check if an equality is likely to be correct by testing the parity of each side. As with ordinary arithmetic, multiplication and addition are commutative and associative, and multiplication is distributive over addition. However, subtraction in parity is identical to addition, so subtraction also possesses these properties (which are absent from ordinary arithmetic).


Addition
Addition
Addition is a mathematical operation that represents combining collections of objects together into a larger collection. It is signified by the plus sign . For example, in the picture on the right, there are 3 + 2 apples—meaning three apples and two other apples—which is the same as five apples....
and subtraction
Subtraction
In arithmetic, subtraction is one of the four basic binary operations; it is the inverse of addition, meaning that if we start with any number and add any number and then subtract the same number we added, we return to the number we started with...


Division
Division (mathematics)
right|thumb|200px|20 \div 4=5In mathematics, especially in elementary arithmetic, division is an arithmetic operation.Specifically, if c times b equals a, written:c \times b = a\,...

The division of two whole numbers does not necessarily result in a whole number.
For example, 1 divided by 4 equals 1/4, which is neither even nor odd, since the concepts even and odd apply only to integers.
But when the quotient
Quotient
In mathematics, a quotient is the result of division. For example, when dividing 6 by 3, the quotient is 2, while 6 is called the dividend, and 3 the divisor. The quotient further is expressed as the number of times the divisor divides into the dividend e.g. The quotient of 6 and 2 is also 3.A...
is an integer, it will be even if and only if
If and only if
In logic and related fields such as mathematics and philosophy, if and only if is a biconditional logical connective between statements....
the dividend
Division (mathematics)
right|thumb|200px|20 \div 4=5In mathematics, especially in elementary arithmetic, division is an arithmetic operation.Specifically, if c times b equals a, written:c \times b = a\,...
has more factors of two
Integer factorization
In number theory, integer factorization or prime factorization is the decomposition of a composite number into smaller non-trivial divisors, which when multiplied together equal the original integer....
than the divisor.

The ancient Greeks considered 1 to be neither fully odd nor fully even. Some of this sentiment survived into the 19th century: Friedrich Wilhelm August Fröbel's 1826 The Education of Man instructs the teacher to drill students with the claim that 1 is neither even nor odd, to which Fröbel attaches the philosophical afterthought,

The even numbers form an ideal in the ring of integers, but the odd numbers do not — this is clear from the fact that the identity
Identity (mathematics)
In mathematics, the term identity has several different important meanings:*An identity is a relation which is tautologically true. This means that whatever the number or value may be, the answer stays the same. For example, algebraically, this occurs if an equation is satisfied for all values of...
element for addition, zero, is an element of the even numbers only. An integer is even if it is congruent to 0 modulo
Modular arithmetic
In mathematics, modular arithmetic is a system of arithmetic for integers, where numbers "wrap around" after they reach a certain value—the modulus....
this ideal, in other words if it is congruent to 0 modulo 2, and odd if it is congruent to 1 modulo 2.

Goldbach's conjecture
Goldbach's conjecture
Goldbach's conjecture is one of the oldest unsolved problems in number theory and in all of mathematics. It states:A Goldbach number is a number that can be expressed as the sum of two odd primes...
states that every even integer greater than 2 can be represented as a sum of two prime numbers.
Modern computer
Computer
A computer is a programmable machine designed to sequentially and automatically carry out a sequence of arithmetic or logical operations. The particular sequence of operations can be changed readily, allowing the computer to solve more than one kind of problem...
calculations have shown this conjecture to be true for integers up to at least 4 × 1014, but still no general proof
Mathematical proof
In mathematics, a proof is a convincing demonstration that some mathematical statement is necessarily true. Proofs are obtained from deductive reasoning, rather than from inductive or empirical arguments. That is, a proof must demonstrate that a statement is true in all cases, without a single...
has been found.


Parity for other objects 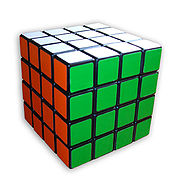 Parity is also used to refer to a number of other properties.