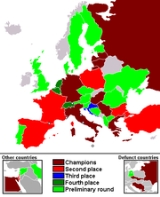 24 European teams take part in the final competition. The qualification format that existed until Eurobasket 2011
Eurobasket 2011
EuroBasket 2011 was the 37th men's European Basketball Championship, held by FIBA Europe. The competition was hosted by Lithuania. This was the second time Eurobasket had been held in Lithuania, the country having also hosted the 1939 championship. FIBA Europe asserted that Lithuania managed to...
permitted 16 teams to compete. Eight spots were determined by the host nation and the top seven finishers at the previous EuroBasket. The remaining Division A teams competed in the qualification tournament. There, they were divided into four groups. Each group played a double round-robin. The top team in each group qualified for EuroBasket. The best three of the four runners-up also qualified.

Of the ten teams that did not qualify in the qualification tournament, the six best got another chance in the additional qualifying round. The remaining four competed in a relegation round, with two being sent to Division B for the next qualification cycle (and replaced by the two best teams from Division B).

The final spot was determined by the additional qualifying round. The six teams were divided into two groups of three, with each group playing a double round-robin. The top team in each group played in the final against the other group's top team; the winner of that game received the final EuroBasket qualification spot.

EuroBasket has used a number of different formats, ranging from the simple round-robin used in 1939 to the three-stage tournament currently in use. 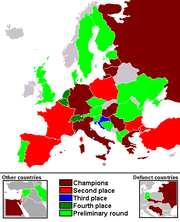 The Republic of Serbia is the legal successor of the Serbia and Montenegro/FR Yugoslavia team.


The Republic of Serbia is the legal successor of the Serbia and Montenegro/FR Yugoslavia team.

Below are the lists of all players voted as the MVP
Most Valuable Player
In sports, a Most Valuable Player award is an honor typically bestowed upon the best performing player or players on a specific team, in an entire league, or for a particular contest or series of contests...
and the top scorers of each EuroBasket edition. Krešimir Ćosić
Krešimir Cosic
Krešimir Ćosić was a Croatian professional basketball player who represented Yugoslavia internationally, a member of FIBA Hall of Fame and Basketball Hall of Fame...
is the only player to win the MVP award twice. Nikos Galis and Radivoj Korać
Radivoj Korac
Radivoj Korać , sometimes also Radivoje, was a successful Serbian basketball player from Yugoslavia....
were top scorers 4 times, the latter all in a row.