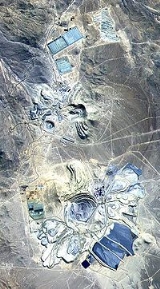 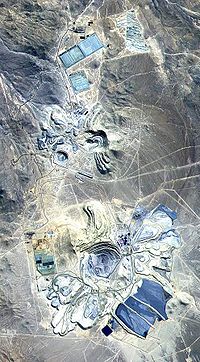 Minera Escondida, which means 'hidden' in Spanish
Spanish language
Spanish , also known as Castilian , is a Romance language in the Ibero-Romance group that evolved from several languages and dialects in central-northern Iberia around the 9th century and gradually spread with the expansion of the Kingdom of Castile into central and southern Iberia during the...
, is a mining company that operates two open pit copper
Copper
Copper is a chemical element with the symbol Cu and atomic number 29. It is a ductile metal with very high thermal and electrical conductivity. Pure copper is soft and malleable; an exposed surface has a reddish-orange tarnish...
mines in the Atacama Desert, 170 km southeast of Antofagasta
Antofagasta
Antofagasta is a port city in northern Chile, about north of Santiago. It is the capital of Antofagasta Province and Antofagasta Region. According to the 2002 census, the city has a population of 296,905...
in northern Chile
Chile
Chile ,officially the Republic of Chile , is a country in South America occupying a long, narrow coastal strip between the Andes mountains to the east and the Pacific Ocean to the west. It borders Peru to the north, Bolivia to the northeast, Argentina to the east, and the Drake Passage in the far...
. It is currently the highest producing copper mine in the world. 2007 production of 1.483 million tons of the metal was worth US$ 10.12 billion, mainly as metal in concentrate but some as cathode, and was 9.5% of world output and 26% of Chilean production, according to the US Geological Survey's preliminary estimates of 2007 world mine output.

It is so called because the main orebody does not outcrop on surface but is 'hidden' by hundreds of metres of practically barren overburden. The lower open pit in the satellite image on the right is the main Escondida mine but the upper two are Barrick Gold
Barrick Gold
Barrick Gold Corporation is the largest pure gold mining company in the world, with its headquarters in Toronto, Ontario, Canada; and four regional business units located in Australia, Africa, North America and South America...
's Zaldívar mine. The second Escondida open pit, Escondida Norte, had not been established when the image was taken but is now immediately to the right (east) of the larger Zaldívar pit.

Escondida produces mainly copper concentrates, which are piped as a slurry down to the port of Coloso where they are dewatered before shipping, and a smaller proportion of cathode copper from the leaching of both oxide and low grade sulfide ore. It also produces gold and silver.

The mine is owned 57.5% by BHP Billiton
BHP Billiton
BHP Billiton is a global mining, oil and gas company headquartered in Melbourne, Australia and with a major management office in London, United Kingdom...
, 30% by Rio Tinto
Rio Tinto Group
The Rio Tinto Group is a diversified, British-Australian, multinational mining and resources group with headquarters in London and Melbourne. The company was founded in 1873, when a multinational consortium of investors purchased a mine complex on the Rio Tinto river, in Huelva, Spain from the...
, 10% by JECO, a Japanese consortium headed by Mitsubishi
Mitsubishi
The Mitsubishi Group , Mitsubishi Group of Companies, or Mitsubishi Companies is a Japanese multinational conglomerate company that consists of a range of autonomous businesses which share the Mitsubishi brand, trademark and legacy...
and 2.5% by the International Finance Corp (IFC), a World Bank
World Bank
The World Bank is an international financial institution that provides loans to developing countries for capital programmes.The World Bank's official goal is the reduction of poverty...
subsidiary. It is managed by a seven man Owner's Council designated by the four owners. At present Escondida is the largest foreign investment in Chile with a cumulative investment of US$5.64 billion at the end of 2006.

In 1978 J David Lowell proposed an exploration program along the porphyry
Porphyry copper deposit
Porphyry copper deposits are copper orebodies which are associated with porphyritic intrusive rocks and the fluids that accompany them during the transition and cooling from magma to rock. Circulating surface water or underground fluids may interact with the plutonic fluids...
copper belt between Chuquicamata
Chuquicamata
Chuquicamata, or "Chuqui" as it is more familiarly known, is by digged volume the biggest open pit copper mine in the world, located in the north of Chile, 215 km northeast of Antofagasta and 1,240 km north of the capital, Santiago...
in the north and El Salvador in the south. Minera Utah de Chile and Getty Mining (Chile) formed a joint venture to carry it out. On March 14 1981, 'Pozo 6' the last scheduled borehole in the program, hit 52 metres of 1.51% copper at a depth of 240 metres and discovered the main Escondida orebody. More holes were drilled to delineate the orebody and a shaft was sunk to provide bulk samples for metallurgical testing. Construction of the mine started in 1988 which including the stripping of over 180 million tonnes of waste in order to get to the orebody.

Ownership changed when BHP acquired Utah Mining and then Texaco acquired Getty Oil and sold off its mineral interests. BHP bought these and then sold a 30% interest to Rio Tinto and 10% to JECO. It subsequently sold 2.5% to the IFC.

The Escondida deposit is one of a cluster of porphyry coppers in an elongated area about 18 km north-south and 3 km east-west and is associated with the 600 km long West Fissure (Falla Oeste) system which is in turn associated with most of the major Chilean porphyry deposits. A barren leached cap, in places up to 300 metres thick, overlies a thick zone of high grade secondary supergene
Supergene (geology)
In ore deposit geology, supergene processes or enrichment occur relatively near the surface. Supergene processes include the predominance of meteoric water circulation with concomitant oxidation and chemical weathering. The descending meteoric waters oxidize the primary sulfide ore minerals and...
mineralisation of the main orebody, largely chalcocite
Chalcocite
Chalcocite, copper sulfide , is an important copper ore mineral. It is opaque, being colored dark-gray to black with a metallic luster. It has a hardness of 2½ - 3. It is a sulfide with an orthorhombic crystal system....
and covellite
Covellite
Covellite is a rare copper sulfide mineral with the formula CuS. This indigo blue mineral is ubiquitous in copper ores, it is found in limited abundance and is not an important ore of copper itself, although it is well known to mineral collectors.The mineral is associated with chalcocite in zones...
; which in turn overlies the unaltered primary mineralisation of chalcopyrite
Chalcopyrite
Chalcopyrite is a copper iron sulfide mineral that crystallizes in the tetragonal system. It has the chemical composition CuFeS2. It has a brassy to golden yellow color and a hardness of 3.5 to 4 on the Mohs scale. Its streak is diagnostic as green tinged black.On exposure to air, chalcopyrite...
, bornite
Bornite
Bornite is a sulfide mineral with chemical composition Cu5FeS4 that crystallizes in the orthorhombic system .-Appearance:Bornite has a brown to copper-red color on fresh surfaces that tarnishes to various iridescent shades of blue to purple in places...
and pyrite
Pyrite
The mineral pyrite, or iron pyrite, is an iron sulfide with the formula FeS2. This mineral's metallic luster and pale-to-normal, brass-yellow hue have earned it the nickname fool's gold because of its resemblance to gold...
.

Sulfide ore, which contributes 77% of the recoverable copper reserve, is crushed and milled in one of the two concentrators and the copper concentrate is separated out using froth flotation
Froth flotation
Froth flotation is a process for selectively separating hydrophobic materials from hydrophilic. This is used in several processing industries...
. Approximately 86% of the copper is recovered. It is piped down to the port of Coloso where it is dewatered before shipping. Oxide ore, 4% of recoverable copper, is crushed, agglomerated and then acid leached in large heaps and the copper recovered from the leach solutions as copper cathode in a solvent extraction/electrowinning (SX/EW) plant. Recovery is 68%. The low grade sulfide ore contributes 19% of recoverable copper. It is also crushed and dumped on large heaps but here the leaching occurs through oxidation and bacterial
Bioleaching
Bioleaching is the extraction of specific metals from their ores through the use of living organisms. This is much cleaner than the traditional heap leaching using cyanide...
action. The copper is also recovered by SX/EW.

The average copper price in 2007 rose to US$3.23/lb compared with the mines total direct costs of only 60.8 cents/lb, which fell partly as a result of sharply lower treatment and refining costs charged by smelters. The operation was thus highly profitable and paid US$2.2 billion in tax to the Chilean treasury.

As a result of its considerable size relative to the world copper market, developments at Escondida can have dramatic effects on the world copper price as was shown by its gyrations during the strike in August 2006. The strike was called because the workers felt that they were not sharing in the very high profits being made by the company on the back of the record copper price. The workers initially demanded a 13% pay rise plus a bonus of $30,000 but eventually settled for a 5% increase, a $17,000 bonus and a number of other minor benefits. The company managed to keep production at 40% of normal levels but the union eventually blockaded the road to the mine on 16 August. On 18 August Escondida declared force majeure and stopped production.

Arturo Martinez
Arturo Martínez
Arturo Esteban Martínez Rivera is a male judoka from Mexico. He participated in the 2008 Summer Olympics.-References:* on JudoInside.com*...
, the Chairman of the Central Unitaria de Trabajadores
Workers' United Center of Chile
The Workers' United Center of Chile is a union federation in Chile. The CUT was founded in 1953, but it was suppressed after the Chilean coup of 1973. It was refounded in September 1988 near the end of Augusto Pinochet's dictatorship....
, (CUT, an association of Chilean trade unionists) met with the Escondida workers on 17 August 2006 and said that "what is happening at Escondida puts back onto the agenda a new nationalisation of copper, lo que ocurre en Escondida pone a la orden del día una nueva nacionalización del cobre.