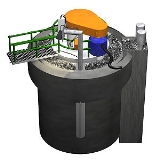 Overview
Froth flotation is a process for selectively separating hydrophobic materials from hydrophilic. This is used in several processing industries. Historically this was first used in the mining industry.
William Haynes in 1869 patented a process for separating sulfide
Sulfide
A sulfide is an anion of sulfur in its lowest oxidation state of 2-. Sulfide is also a slightly archaic term for thioethers, a common type of organosulfur compound that are well known for their bad odors.- Properties :...
and gangue
Gangue
In mining, gangue is the commercially worthless material that surrounds, or is closely mixed with, a wanted mineral in an ore deposit. The separation of mineral from gangue is known as mineral processing, mineral dressing or ore dressing and it is a necessary and often significant aspect of mining...
minerals using oil and called it bulk-oil flotation.

The first successful commercial flotation process for mineral sulphides was invented by Frank Elmore who worked on the development with his brother, Stanley.

How do soaps and detergent help in removing the oil and impurities ???
More
x