Encyclopedia
The Mitsubishi Group Mitsubishi Group of Companies, or Mitsubishi Companies is a Japan
Japan
Japan is an island nation in East Asia. Located in the Pacific Ocean, it lies to the east of the Sea of Japan, China, North Korea, South Korea and Russia, stretching from the Sea of Okhotsk in the north to the East China Sea and Taiwan in the south...
ese multinational conglomerate
Conglomerate (company)
A conglomerate is a combination of two or more corporations engaged in entirely different businesses that fall under one corporate structure , usually involving a parent company and several subsidiaries. Often, a conglomerate is a multi-industry company...
company that consists of a range of autonomous businesses which share the Mitsubishi brand
Brand
The American Marketing Association defines a brand as a "Name, term, design, symbol, or any other feature that identifies one seller's good or service as distinct from those of other sellers."...
, trademark and legacy. The Mitsubishi group of companies form a loose entity, the Mitsubishi Keiretsu
Keiretsu
A is a set of companies with interlocking business relationships and shareholdings. It is a type of business group. The keiretsu has maintained dominance over the Japanese economy for the greater half of the twentieth century....
, which is often referenced in Japanese and US media and official reports; in general these companies all descend from the zaibatsu
Zaibatsu
is a Japanese term referring to industrial and financial business conglomerates in the Empire of Japan, whose influence and size allowed for control over significant parts of the Japanese economy from the Meiji period until the end of World War II.-Terminology:...
of the same name. The top 25 companies are also members of the Mitsubishi Kin'yōkai, or "Friday Club", and meet monthly. The Mitsubishi.com Committee is meant to facilitate communication and access of the brand through a portal web site. 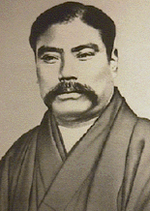 The Mitsubishi company was first established as a shipping
Shipping
Shipping has multiple meanings. It can be a physical process of transporting commodities and merchandise goods and cargo, by land, air, and sea. It also can describe the movement of objects by ship.Land or "ground" shipping can be by train or by truck...
firm by Yatarō Iwasaki (1834–1885) in 1870. In 1873, its name was changed to Mitsubishi Shokai . The name Mitsubishi (三菱 consists of two parts: "mitsu" meaning "three" and "hishi" (which becomes "bishi" under rendaku
Rendaku
is a phenomenon in Japanese morphophonology that governs the voicing of the initial consonant of the non-initial portion of a compound or prefixed word...
) meaning "water caltrop
Water caltrop
The water caltrop, water chestnut, buffalo nut, bat nut, devil pod or Singhara or Pani-fol is either of two species of the genus Trapa: Trapa natans and Trapa bicornis...
" (also called "water chestnut"), and hence "rhombus
Rhombus
In Euclidean geometry, a rhombus or rhomb is a convex quadrilateral whose four sides all have the same length. The rhombus is often called a diamond, after the diamonds suit in playing cards, or a lozenge, though the latter sometimes refers specifically to a rhombus with a 45° angle.Every...
", which is reflected in the company's famous logo
Logo
A logo is a graphic mark or emblem commonly used by commercial enterprises, organizations and even individuals to aid and promote instant public recognition...
. It is also translated as "three diamonds".

Mitsubishi had been established in 1870, two years after the Meiji Restoration
Meiji Restoration
The , also known as the Meiji Ishin, Revolution, Reform or Renewal, was a chain of events that restored imperial rule to Japan in 1868...
, with shipping as its core business. Its diversification was mostly into related fields. It entered into coal-mining to gain the coal needed for ships, bought a shipbuilding yard from the government to repair the ships it used, founded an iron mill to supply iron to the shipbuilding yard, started a marine insurance business to cater for its shipping business, and so forth. Later, the managerial resources and technological capabilities acquired through the operation of shipbuilding were utilized to expand the business further into the manufacture of aircraft and equipment. Similarly, the experience of overseas shipping led the firm to enter into a trading business.

The company bought into coal mining
Coal mining
The goal of coal mining is to obtain coal from the ground. Coal is valued for its energy content, and since the 1880s has been widely used to generate electricity. Steel and cement industries use coal as a fuel for extraction of iron from iron ore and for cement production. In the United States,...
in 1881 by acquiring the Takashima mine and Hashima Island
Hashima Island
For the island in Connecticut, see Thimble Islands., commonly called Gunkanjima or Gunkanshima , is one among 505 uninhabited islands in the Nagasaki Prefecture about 15 kilometers from Nagasaki itself....
in 1890, using the production to fuel their extensive steamship fleet. They also diversified into shipbuilding, bank
Bank
A bank is a financial institution that serves as a financial intermediary. The term "bank" may refer to one of several related types of entities:...
ing, insurance
Insurance
In law and economics, insurance is a form of risk management primarily used to hedge against the risk of a contingent, uncertain loss. Insurance is defined as the equitable transfer of the risk of a loss, from one entity to another, in exchange for payment. An insurer is a company selling the...
, warehousing, and trade. Later diversification carried the organization into such sectors as paper
Paper
Paper is a thin material mainly used for writing upon, printing upon, drawing or for packaging. It is produced by pressing together moist fibers, typically cellulose pulp derived from wood, rags or grasses, and drying them into flexible sheets....
, steel
Steel
Steel is an alloy that consists mostly of iron and has a carbon content between 0.2% and 2.1% by weight, depending on the grade. Carbon is the most common alloying material for iron, but various other alloying elements are used, such as manganese, chromium, vanadium, and tungsten...
, glass
Glass
Glass is an amorphous solid material. Glasses are typically brittle and optically transparent.The most familiar type of glass, used for centuries in windows and drinking vessels, is soda-lime glass, composed of about 75% silica plus Na2O, CaO, and several minor additives...
, electrical equipment, aircraft
Aircraft
An aircraft is a vehicle that is able to fly by gaining support from the air, or, in general, the atmosphere of a planet. An aircraft counters the force of gravity by using either static lift or by using the dynamic lift of an airfoil, or in a few cases the downward thrust from jet engines.Although...
, oil
Petroleum
Petroleum or crude oil is a naturally occurring, flammable liquid consisting of a complex mixture of hydrocarbons of various molecular weights and other liquid organic compounds, that are found in geologic formations beneath the Earth's surface. Petroleum is recovered mostly through oil drilling...
, and real estate
Real estate
In general use, esp. North American, 'real estate' is taken to mean "Property consisting of land and the buildings on it, along with its natural resources such as crops, minerals, or water; immovable property of this nature; an interest vested in this; an item of real property; buildings or...
. As Mitsubishi built a broadly based conglomerate
Conglomerate (company)
A conglomerate is a combination of two or more corporations engaged in entirely different businesses that fall under one corporate structure , usually involving a parent company and several subsidiaries. Often, a conglomerate is a multi-industry company...
, it played a central role in the modernization of Japanese industry.

The merchant fleet entered into a period of diversification that would eventually result in the creation of three entities:

During the Second World War, Mitsubishi manufactured aircraft under the direction of Jiro Horikoshi. The Mitsubishi A6M ("Zero") was a primary Japanese naval fighter in World War II
World War II
World War II, or the Second World War , was a global conflict lasting from 1939 to 1945, involving most of the world's nations—including all of the great powers—eventually forming two opposing military alliances: the Allies and the Axis...
. It was used by Imperial Japanese Navy
Imperial Japanese Navy
The Imperial Japanese Navy was the navy of the Empire of Japan from 1869 until 1947, when it was dissolved following Japan's constitutional renunciation of the use of force as a means of settling international disputes...
pilots throughout the war, including in kamikaze
Kamikaze
The were suicide attacks by military aviators from the Empire of Japan against Allied naval vessels in the closing stages of the Pacific campaign of World War II, designed to destroy as many warships as possible....
attacks during the later stages. Allied
Allies of World War II
The Allies of World War II were the countries that opposed the Axis powers during the Second World War . Former Axis states contributing to the Allied victory are not considered Allied states...
pilots were astounded by its maneuverability, and it was very successful in combat until the Allies devised tactics to utilize their advantage in firepower and diving speed.

Mitsubishi made use of forced labor during this time period. Laborers included allied POWs, as well as Chinese
People's Republic of China
China , officially the People's Republic of China , is the most populous country in the world, with over 1.3 billion citizens. Located in East Asia, the country covers approximately 9.6 million square kilometres...
and Korean citizens. In the post-war period, lawsuits and demands for compensations were presented against the Mitsubishi Corporation, in particular by former Chinese slave laborers.

Mitsubishi were involved in the opium
Opium
Opium is the dried latex obtained from the opium poppy . Opium contains up to 12% morphine, an alkaloid, which is frequently processed chemically to produce heroin for the illegal drug trade. The latex also includes codeine and non-narcotic alkaloids such as papaverine, thebaine and noscapine...
trade in China during this period.

The traditional Mitsubishi emphasis on technological development was in new ventures in such fields as space development, aviation, ocean development, data communications, computers, and semiconductors. Mitsubishi companies also were active in consumer goods and services.

In 1970, Mitsubishi companies established the Mitsubishi Foundation to commemorate the centennial anniversary of the founding of the first Mitsubishi company. The companies also individually maintain charitable foundations. Mitsubishi pavilions have been highlights of expositions in Japan since EXPO'70 in Osaka in 1970s to 1980s.

As of 2007, Mitsubishi Corporation, a member of the Mitsubishi Group, is Japan's largest general trading company (sogo shosha
Sogo shosha
' means general trading companies, a business entity unique to Japan trading a wide range of products and materials. In addition to trading, they have historically acted as investment banks and private equities. Sōgō shōsha may be better described as a business philosophy than with a visual model...
) with over 200 bases of operations in approximately 80 countries worldwide. Together with its over 500 group companies, Mitsubishi employs a multinational workforce of approximately 54,000 people. Mitsubishi has long been engaged in business with customers around the world in many industries, including energy, metals, machinery, chemicals, food and general merchandise.

These companies are members of the Mitsubishi Kinyokai (or Friday Club), and meet monthly.