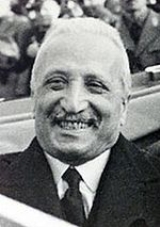 Encyclopedia
Enrico Roberto De Nicola (enˈriːko roˈbɛrto de niˈkɔːla; 9 November 1877, Naples
Naples
Naples is a city in Southern Italy, situated on the country's west coast by the Gulf of Naples. Lying between two notable volcanic regions, Mount Vesuvius and the Phlegraean Fields, it is the capital of the region of Campania and of the province of Naples...
– 1 October 1959) was an Italian
Italy
Italy , officially the Italian Republic languages]] under the European Charter for Regional or Minority Languages. In each of these, Italy's official name is as follows:;;;;;;;;), is a unitary parliamentary republic in South-Central Europe. To the north it borders France, Switzerland, Austria and...
jurist
Jurist
A jurist or jurisconsult is a professional who studies, develops, applies, or otherwise deals with the law. The term is widely used in American English, but in the United Kingdom and many Commonwealth countries it has only historical and specialist usage...
, journalist
Journalist
A journalist collects and distributes news and other information. A journalist's work is referred to as journalism.A reporter is a type of journalist who researchs, writes, and reports on information to be presented in mass media, including print media , electronic media , and digital media A...
, politician
Politician
A politician, political leader, or political figure is an individual who is involved in influencing public policy and decision making...
, and the first provisional Head of State of the newborn republic
Birth of the Italian Republic
The Italian constitutional referendum which officially took place on 2 June 1946, is a key event of Italian contemporary history. Until 1946, Italy was a kingdom ruled by the House of Savoy, kings of Italy since the Risorgimento and previously rulers of Savoy...
of Italy from 1946 to 1948.

Enrico De Nicola was born in Naples
Naples
Naples is a city in Southern Italy, situated on the country's west coast by the Gulf of Naples. Lying between two notable volcanic regions, Mount Vesuvius and the Phlegraean Fields, it is the capital of the region of Campania and of the province of Naples...
and became famous as one of the most esteemed penal
Criminal law
Criminal law, is the body of law that relates to crime. It might be defined as the body of rules that defines conduct that is not allowed because it is held to threaten, harm or endanger the safety and welfare of people, and that sets out the punishment to be imposed on people who do not obey...
lawyer
Lawyer
A lawyer, according to Black's Law Dictionary, is "a person learned in the law; as an attorney, counsel or solicitor; a person who is practicing law." Law is the system of rules of conduct established by the sovereign government of a society to correct wrongs, maintain the stability of political...
s in Italy. He was elected a deputy for the first time in 1909 and he filled minor governmental posts until the advent of fascism
Fascism
Fascism is a radical authoritarian nationalist political ideology. Fascists seek to rejuvenate their nation based on commitment to the national community as an organic entity, in which individuals are bound together in national identity by suprapersonal connections of ancestry, culture, and blood...
, when he retired from political life. He was appointed senator by King Victor Emmanuel III in 1926, but he never took part in the workings of the Assembly.

After 1943, when fascism ended, De Nicola was perhaps the most influential mediator
Mediation
Mediation, as used in law, is a form of alternative dispute resolution , a way of resolving disputes between two or more parties. A third party, the mediator, assists the parties to negotiate their own settlement...
for the creation of the title "Lieutenant-General of the Realm
Luogotenente
The Italian word luogotenente , plural luogotenenti, is an etymological parallel to lieutenant, deriving from the Latin locum tenens "holding a place", i.e...
", by which the king's son Prince Umberto took over most of the functions of the sovereign. Once the monarchy had ended, the Constituent Assembly
Constituent assembly
A constituent assembly is a body composed for the purpose of drafting or adopting a constitution...
elected De Nicola Provisional Head of State on 28 June 1946, with 80% of the votes, at the first round of voting. Giulio Andreotti
Giulio Andreotti
Giulio Andreotti is an Italian politician of the now dissolved centrist Christian Democracy party. He served as the 42nd Prime Minister of Italy from 1972 to 1973, from 1976 to 1979 and from 1989 to 1992. He also served as Minister of the Interior , Defense Minister and Foreign Minister and he...
later recalled that De Nicola — mainly because of his unique modesty — was not sure whether to accept the nomination, and underwent frequent changes of mind in the face of repeated importuning by all the major political leaders. Andreotti had then to write to him: "Your Excellency, please, decide to decide if you can accept to accept..."

De Nicola became a senator for life
Senator for life
A senator for life is a member of the senate or equivalent upper chamber of a legislature who has life tenure. , 7 Italian Senators out of 322, 4 out of the 47 Burundian Senators and all members of the British House of Lords have lifetime tenure...
(as a former Head of State), and later was elected the President of the Senate, and of the Constitutional Court.