Encyclopedia
A constituent assembly is a body composed for the purpose of drafting or adopting a constitution
Constitution
A constitution is a set of fundamental principles or established precedents according to which a state or other organization is governed. These rules together make up, i.e. constitute, what the entity is...
. As the fundamental document constituting a state, a constitution cannot normally be modified or amended by the state's normal legislative
Legislature
A legislature is a kind of deliberative assembly with the power to pass, amend, and repeal laws. The law created by a legislature is called legislation or statutory law. In addition to enacting laws, legislatures usually have exclusive authority to raise or lower taxes and adopt the budget and...
procedures; instead a constituent assembly, the rules for which are normally laid down in the constitution, must be set up. A constituent assembly is usually set up for its specific purpose, which it carries out in a relatively short time, after which the assembly is dissolved.

Unlike forms of constitution-making in which a constitution is unilaterally imposed by a sovereign lawmaker, the constituent assembly creates a constitution through “internally imposed” actions, in that members of the constituent assembly are themselves citizens, but not necessarily the rulers, of the country for which they are creating a constitution. As described by Columbia University Social Sciences Professor Jon Elster
Jon Elster
Jon Elster is a Norwegian social and political theorist who has authored works in the philosophy of social science and rational choice theory...
:

The Constituent Assembly of India
India
India , officially the Republic of India , is a country in South Asia. It is the seventh-largest country by geographical area, the second-most populous country with over 1.2 billion people, and the most populous democracy in the world...
was elected to write the Constitution of India
Constitution of India
The Constitution of India is the supreme law of India. It lays down the framework defining fundamental political principles, establishes the structure, procedures, powers, and duties of government institutions, and sets out fundamental rights, directive principles, and the duties of citizens...
, and served as its first Parliament
Parliament
A parliament is a legislature, especially in those countries whose system of government is based on the Westminster system modeled after that of the United Kingdom. The name is derived from the French , the action of parler : a parlement is a discussion. The term came to mean a meeting at which...
as an independent nation. It was set up as a result of negotiations between the leaders of Indian independence movement
Indian independence movement
The term Indian independence movement encompasses a wide area of political organisations, philosophies, and movements which had the common aim of ending first British East India Company rule, and then British imperial authority, in parts of South Asia...
and members of the British Cabinet Mission. The constituent assembly was elected indirectly by the members of the Provincial legislative assembly, that existed under the British Raj
British Raj
British Raj was the British rule in the Indian subcontinent between 1858 and 1947; The term can also refer to the period of dominion...
. It first met on December 9, 1946 in Delhi
Delhi
Delhi , officially National Capital Territory of Delhi , is the largest metropolis by area and the second-largest by population in India, next to Mumbai. It is the eighth largest metropolis in the world by population with 16,753,265 inhabitants in the Territory at the 2011 Census...
. On August 15, 1947, India became an independent nation, and the Constituent Assembly also started functioning as India's Parliament. The Assembly approved the Constitution on November 26, 1949. On January 26, 1950, the Constitution took effect — a day now commemorated as Republic Day
Republic Day
Republic Day is the name of a holiday in several countries to commemorate the day when they became republics.-1 January in the Republic of Slovakia:This was the day of creation of the Republic of Slovakia. A national holiday since 1993...
in India. At this point, the Constituent Assembly became the Provisional Parliament of India, until the first elections under the new Constitution took place in 1952.

The Constituent Assembly of Italy was established in 1946 in the wake of Fascist Italy's defeat during World War II. It was elected with universal suffrage, simultaneously with a referendum
Referendum
A referendum is a direct vote in which an entire electorate is asked to either accept or reject a particular proposal. This may result in the adoption of a new constitution, a constitutional amendment, a law, the recall of an elected official or simply a specific government policy. It is a form of...
about the adoption of Republic or the continuation of monarchy. Voters chose Republic, and the new assembly had the task to approve the new republic governments, as well as to write a new constitution. This was approved on 22 December 1947.

The Russian Constituent Assembly
Russian Constituent Assembly
The All Russian Constituent Assembly was a constitutional body convened in Russia after the October Revolution of 1917. It is generally reckoned as the first democratically elected legislative body of any kind in Russian history. It met for 13 hours, from 4 p.m...
was established in Russia
Russia
Russia or , officially known as both Russia and the Russian Federation , is a country in northern Eurasia. It is a federal semi-presidential republic, comprising 83 federal subjects...
in the wake of the October Revolution
October Revolution
The October Revolution , also known as the Great October Socialist Revolution , Red October, the October Uprising or the Bolshevik Revolution, was a political revolution and a part of the Russian Revolution of 1917...
of 1917 to form a new constitution after the overthrow of the Russian Provisional Government
Russian Provisional Government
The Russian Provisional Government was the short-lived administrative body which sought to govern Russia immediately following the abdication of Tsar Nicholas II . On September 14, the State Duma of the Russian Empire was officially dissolved by the newly created Directorate, and the country was...
. 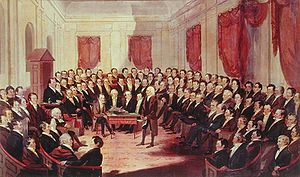 These early state constitutional conventions frequently did not use procedural steps like popular ratification that became commonplace in the mid-19th century. Yet they were considered to be constituent assemblies that exercised their authority as that of the people. As American Sovereigns: The People and America’s Constitutional Tradition Before the Civil War by Christian G. Fritz notes:


“A legitimate constitution depended on whether the sovereign people authorized it, not whether a particular procedure was used or whether revolutionary conventions were free of other responsibilities, such as passing ordinary legislation. It was the people as the sovereign who authorized drafting those first [state] constitutions that gave them their legitimacy, not whether they used procedures that matched what was later understood to be necessary to create fundamental law.”


Countries without an entrenched constitution

The constitution of New Zealand consists of a collection of statutes (Acts of Parliament), Treaties, Orders-in-Council, Letters patent, decisions of the Courts and unwritten constitutional conventions. Because it is not supreme law, the constitution is comparatively easy to reform, requiring only a majority of Members of Parliament to amend it.