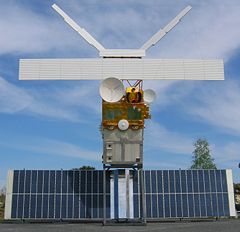 Earth observation satellites are satellite
Satellite
In the context of spaceflight, a satellite is an object which has been placed into orbit by human endeavour. Such objects are sometimes called artificial satellites to distinguish them from natural satellites such as the Moon....
s specifically designed to observe Earth
Earth
Earth is the third planet from the Sun, and the densest and fifth-largest of the eight planets in the Solar System. It is also the largest of the Solar System's four terrestrial planets...
from orbit
Orbit
In physics, an orbit is the gravitationally curved path of an object around a point in space, for example the orbit of a planet around the center of a star system, such as the Solar System...
, similar to reconnaissance satellites but intended for non-military uses such as environment
Natural environment
The natural environment encompasses all living and non-living things occurring naturally on Earth or some region thereof. It is an environment that encompasses the interaction of all living species....
al monitoring, meteorology
Meteorology
Meteorology is the interdisciplinary scientific study of the atmosphere. Studies in the field stretch back millennia, though significant progress in meteorology did not occur until the 18th century. The 19th century saw breakthroughs occur after observing networks developed across several countries...
, map making etc.

To get a (close to) global coverage with such a relatively low orbit it has to be polar or at least close to polar. As such a rather low orbit will have an orbital period of roughly 100 minutes the Earth will rotate around its polar axis with about 25 deg between successive orbits with the result that the ground track
Ground track
A ground track or ground trace is the path on the surface of the Earth directly below an aircraft or satellite. In the case of a satellite, it is the projection of the satellite's orbit onto the surface of the Earth .A satellite ground track may be thought of as a path along the Earth's surface...
is shifted towards west with these 25 deg in longitude.

For spacecraft carrying instruments for which an altitude of 36000 km is suitable the Geostationary orbit is sometimes the preferred choice. From such an orbit one gets uninterrupted coverage of more than 1/3 of the Earth. With 3 geostationary spacecraft positioned over the equator at longitudes separated with 120 deg the whole Earth is covered except the extreme polar regions. This type of orbit is mainly used for meteorological
Weather satellite
The weather satellite is a type of satellite that is primarily used to monitor the weather and climate of the Earth. Satellites can be either polar orbiting, seeing the same swath of the Earth every 12 hours, or geostationary, hovering over the same spot on Earth by orbiting over the equator while...
satellites. 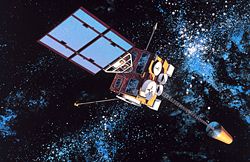 A weather satellite is a type of satellite
Satellite
In the context of spaceflight, a satellite is an object which has been placed into orbit by human endeavour. Such objects are sometimes called artificial satellites to distinguish them from natural satellites such as the Moon....
that is primarily used to monitor the weather
Weather
Weather is the state of the atmosphere, to the degree that it is hot or cold, wet or dry, calm or stormy, clear or cloudy. Most weather phenomena occur in the troposphere, just below the stratosphere. Weather refers, generally, to day-to-day temperature and precipitation activity, whereas climate...
and climate
Climate
Climate encompasses the statistics of temperature, humidity, atmospheric pressure, wind, rainfall, atmospheric particle count and other meteorological elemental measurements in a given region over long periods...
of the Earth
Earth
Earth is the third planet from the Sun, and the densest and fifth-largest of the eight planets in the Solar System. It is also the largest of the Solar System's four terrestrial planets...
. These meteorological satellites, however, see more than cloud
Cloud
A cloud is a visible mass of liquid droplets or frozen crystals made of water and/or various chemicals suspended in the atmosphere above the surface of a planetary body. They are also known as aerosols. Clouds in Earth's atmosphere are studied in the cloud physics branch of meteorology...
s and cloud systems. City lights, fire
Fire
Fire is the rapid oxidation of a material in the chemical process of combustion, releasing heat, light, and various reaction products. Slower oxidative processes like rusting or digestion are not included by this definition....
s, effects of pollution
Pollution
Pollution is the introduction of contaminants into a natural environment that causes instability, disorder, harm or discomfort to the ecosystem i.e. physical systems or living organisms. Pollution can take the form of chemical substances or energy, such as noise, heat or light...
, auroras, sand and dust storms, snow
Snow
Snow is a form of precipitation within the Earth's atmosphere in the form of crystalline water ice, consisting of a multitude of snowflakes that fall from clouds. Since snow is composed of small ice particles, it is a granular material. It has an open and therefore soft structure, unless packed by...
cover, ice
Ice
Ice is water frozen into the solid state. Usually ice is the phase known as ice Ih, which is the most abundant of the varying solid phases on the Earth's surface. It can appear transparent or opaque bluish-white color, depending on the presence of impurities or air inclusions...
mapping, boundaries of ocean current
Ocean current
An ocean current is a continuous, directed movement of ocean water generated by the forces acting upon this mean flow, such as breaking waves, wind, Coriolis effect, cabbeling, temperature and salinity differences and tides caused by the gravitational pull of the Moon and the Sun...
s, energy
Energy
In physics, energy is an indirectly observed quantity. It is often understood as the ability a physical system has to do work on other physical systems...
flows, etc., are other types of environmental information collected using weather satellites.

Weather satellite images helped in monitoring the volcanic ash cloud from Mount St. Helens
Mount St. Helens
Mount St. Helens is an active stratovolcano located in Skamania County, Washington, in the Pacific Northwest region of the United States. It is south of Seattle, Washington and northeast of Portland, Oregon. Mount St. Helens takes its English name from the British diplomat Lord St Helens, a...
and activity from other volcanoes such as Mount Etna
Mount Etna
Mount Etna is an active stratovolcano on the east coast of Sicily, close to Messina and Catania. It is the tallest active volcano in Europe, currently standing high, though this varies with summit eruptions; the mountain is 21 m higher than it was in 1981.. It is the highest mountain in...
. Smoke from fires in the western United States
Western United States
.The Western United States, commonly referred to as the American West or simply "the West," traditionally refers to the region comprising the westernmost states of the United States. Because the U.S. expanded westward after its founding, the meaning of the West has evolved over time...
such as Colorado
Colorado
Colorado is a U.S. state that encompasses much of the Rocky Mountains as well as the northeastern portion of the Colorado Plateau and the western edge of the Great Plains...
and Utah
Utah
Utah is a state in the Western United States. It was the 45th state to join the Union, on January 4, 1896. Approximately 80% of Utah's 2,763,885 people live along the Wasatch Front, centering on Salt Lake City. This leaves vast expanses of the state nearly uninhabited, making the population the...
have also been monitored.

El Niño and its effects on weather are monitored daily from satellite images. The Antarctic
Antarctic
The Antarctic is the region around the Earth's South Pole, opposite the Arctic region around the North Pole. The Antarctic comprises the continent of Antarctica and the ice shelves, waters and island territories in the Southern Ocean situated south of the Antarctic Convergence...
ozone hole is mapped from weather satellite data. Collectively, weather satellites flown by the U.S., Europe, India, China, Russia, and Japan provide nearly continuous observations for a global weather watch, used via visible light and infrared rays of the electromagnetic spectrum.

Other environmental satellites can assist environmental monitoring
Environmental monitoring
Environmental monitoring describes the processes and activities that need to take place to characterise and monitor the quality of the environment...
by detecting changes in the Earth's vegetation, sea state, ocean color, and ice fields. By monitoring vegetation changes over time, droughts can be monitored by comparing the current vegetation state to its long term average. For example, the 2002 oil spill off the northwest coast of Spain
Spain
Spain , officially the Kingdom of Spain languages]] under the European Charter for Regional or Minority Languages. In each of these, Spain's official name is as follows:;;;;;;), is a country and member state of the European Union located in southwestern Europe on the Iberian Peninsula...
was watched carefully by the European ENVISAT, which, though not a weather satellite, flies an instrument (ASAR) which can see changes in the sea surface.

Terrain can be mapped from space with the use of satellites, such as RADARSAT-1
RADARSAT-1
Radarsat-1 is Canada's first commercial Earth observation satellite.-Mission:It was launched at 14h22 UTC on November 4, 1995 from Vandenberg AFB in California, into a sun-synchronous orbit above the Earth with an altitude of 798 kilometers and inclination of 98.6 degrees...
and TerraSAR-X
TerraSAR-X
TerraSAR-X, a German Earth observation satellite, is a joint venture being carried out under a public-private-partnership between the German Aerospace Center DLR and EADS Astrium GmbH; the exclusive commercial exploitation rights are held by the geo-information service provider Infoterra GmbH....
.