Encyclopedia
An ocean current is a continuous, directed movement of ocean water generated by the forces acting upon this mean flow
Mean flow
In fluid dynamics, the fluid flow is often decomposed into a mean flow – and deviations from the mean. The averaging can be done either in space or in time....
, such as breaking waves, wind
Wind
Wind is the flow of gases on a large scale. On Earth, wind consists of the bulk movement of air. In outer space, solar wind is the movement of gases or charged particles from the sun through space, while planetary wind is the outgassing of light chemical elements from a planet's atmosphere into space...
, Coriolis effect
Coriolis effect
In physics, the Coriolis effect is a deflection of moving objects when they are viewed in a rotating reference frame. In a reference frame with clockwise rotation, the deflection is to the left of the motion of the object; in one with counter-clockwise rotation, the deflection is to the right...
, cabbeling
Cabbeling
Cabbeling is the resultant sinking of a combined water parcel due to the mixing process of two separate water parcels. Sinking occurs because of the higher density of the combined water parcel from the mixing of two water parcels of the same density, but different salinity and temperature...
, temperature
Temperature
Temperature is a physical property of matter that quantitatively expresses the common notions of hot and cold. Objects of low temperature are cold, while various degrees of higher temperatures are referred to as warm or hot...
and salinity
Salinity
Salinity is the saltiness or dissolved salt content of a body of water. It is a general term used to describe the levels of different salts such as sodium chloride, magnesium and calcium sulfates, and bicarbonates...
differences and tides caused by the gravitational pull of the Moon
Moon
The Moon is Earth's only known natural satellite,There are a number of near-Earth asteroids including 3753 Cruithne that are co-orbital with Earth: their orbits bring them close to Earth for periods of time but then alter in the long term . These are quasi-satellites and not true moons. For more...
and the Sun
Sun
The Sun is the star at the center of the Solar System. It is almost perfectly spherical and consists of hot plasma interwoven with magnetic fields...
. Depth contours, shore
Shore
A shore or shoreline is the fringe of land at the edge of a large body of water, such as an ocean, sea, or lake. In Physical Oceanography a shore is the wider fringe that is geologically modified by the action of the body of water past and present, while the beach is at the edge of the shore,...
line configurations and interaction with other currents influence a current's direction and strength.

Ocean currents can flow for great distances, and together they create the great flow of the global conveyor belt which plays a dominant part in determining the climate
Climate
Climate encompasses the statistics of temperature, humidity, atmospheric pressure, wind, rainfall, atmospheric particle count and other meteorological elemental measurements in a given region over long periods...
of many of the Earth
Earth
Earth is the third planet from the Sun, and the densest and fifth-largest of the eight planets in the Solar System. It is also the largest of the Solar System's four terrestrial planets...
’s regions. Perhaps the most striking example is the Gulf Stream
Gulf Stream
The Gulf Stream, together with its northern extension towards Europe, the North Atlantic Drift, is a powerful, warm, and swift Atlantic ocean current that originates at the tip of Florida, and follows the eastern coastlines of the United States and Newfoundland before crossing the Atlantic Ocean...
, which makes northwest Europe much more temperate
Temperate
In geography, temperate or tepid latitudes of the globe lie between the tropics and the polar circles. The changes in these regions between summer and winter are generally relatively moderate, rather than extreme hot or cold...
than any other region at the same latitude
Latitude
In geography, the latitude of a location on the Earth is the angular distance of that location south or north of the Equator. The latitude is an angle, and is usually measured in degrees . The equator has a latitude of 0°, the North pole has a latitude of 90° north , and the South pole has a...
. Another example is the Hawaiian Islands
Hawaiian Islands
The Hawaiian Islands are an archipelago of eight major islands, several atolls, numerous smaller islets, and undersea seamounts in the North Pacific Ocean, extending some 1,500 miles from the island of Hawaii in the south to northernmost Kure Atoll...
, where the climate is cooler (sub-tropical) than the tropical latitudes in which they are located, due to the effect of the California Current
California Current
The California Current is a Pacific Ocean current that moves south along the western coast of North America, beginning off southern British Columbia, and ending off southern Baja California. There are five major coastal currents affiliated with upwelling zones...
. 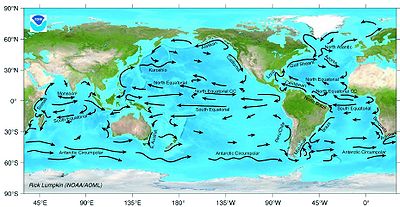 Surface ocean currents are generally wind-driven and develop their typical clockwise spirals in the northern hemisphere
Northern Hemisphere
The Northern Hemisphere is the half of a planet that is north of its equator—the word hemisphere literally means “half sphere”. It is also that half of the celestial sphere north of the celestial equator...
and counter-clockwise rotation in the southern hemisphere
Southern Hemisphere
The Southern Hemisphere is the part of Earth that lies south of the equator. The word hemisphere literally means 'half ball' or "half sphere"...
because of the imposed wind stresses. In wind-driven currents, the Ekman spiral
Ekman spiral
The Ekman spiral refers to a structure of currents or winds near a horizontal boundary in which the flow direction rotates as one moves away from the boundary. It derives its name from the Swedish oceanographer Vagn Walfrid Ekman...
effect results in the currents flowing at an angle to the driving winds. The areas of surface ocean currents move somewhat with the season
Season
A season is a division of the year, marked by changes in weather, ecology, and hours of daylight.Seasons result from the yearly revolution of the Earth around the Sun and the tilt of the Earth's axis relative to the plane of revolution...
s; this is most notable in equatorial currents.

Deep ocean currents are driven by density and temperature gradients. Thermohaline circulation
Thermohaline circulation
The term thermohaline circulation refers to a part of the large-scale ocean circulation that is driven by global density gradients created by surface heat and freshwater fluxes....
, also known as the ocean's conveyor belt, refers to the deep ocean density-driven ocean basin currents. These currents, which flow under the surface of the ocean and are thus hidden from immediate detection, are called submarine rivers. These are currently being researched using a fleet of underwater robots called Argo
Argo (oceanography)
Argo is an observation system for the Earth's oceans that provides real-time data for use in climate, weather, oceanographic and fisheries research. Argo consists of a large collection of small, drifting oceanic robotic probes deployed worldwide. The probes float as deep as 2 km. Once every...
. Upwelling
Upwelling
Upwelling is an oceanographic phenomenon that involves wind-driven motion of dense, cooler, and usually nutrient-rich water towards the ocean surface, replacing the warmer, usually nutrient-depleted surface water. The increased availability in upwelling regions results in high levels of primary...
and downwelling
Downwelling
Downwelling is the process of accumulation and sinking of higher density material beneath lower density material, such as cold or saline water beneath warmer or fresher water or cold air beneath warm air. It is the sinking limb of a convection cell. Upwelling is the opposite process and together...
areas in the oceans are areas where significant vertical movement of ocean water is observed.

Surface currents make up about 10% of all the water in the ocean. Surface currents are generally restricted to the upper 400 m (1,312.3 ft) of the ocean. The movement of deep water in the ocean basins is by density driven forces and gravity. The density difference is a function of different temperatures and salinity. Deep waters sink into the deep ocean basins at high latitudes where the temperatures are cold enough to cause the density to increase.

Ocean currents are measured in Sverdrup (Sv)
Sverdrup
The sverdrup, named in honour of the pioneering oceanographer Harald Sverdrup, is a unit of measure of volume transport. It is used almost exclusively in oceanography, to measure the transport of ocean currents. Its symbol is Sv. Note that the sverdrup is not an SI unit, and that its symbol...
, where 1Sv is equivalent to a volume flow rate of 1000000 cubic metre per second. 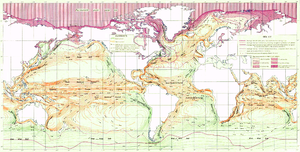 Knowledge of surface ocean currents is essential in reducing costs of shipping, since they reduce fuel costs. In the sail-ship era knowledge was even more essential. A good example of this is the Agulhas current
Agulhas Current
The Agulhas Current is the Western Boundary Current of the southwest Indian Ocean. It flows down the east coast of Africa from 27°S to 40°S. It is narrow, swift and strong...
, which long prevented Portuguese sailors from reaching India. Even today, the round-the-world sailing competitors employ surface currents to their benefit. Ocean currents are also very important in the dispersal of many life forms. An example is the life-cycle of the European Eel.

Ocean currents are important in the study of marine debris
Marine debris
Marine debris, also known as marine litter, is human created waste that has deliberately or accidentally become afloat in a lake, sea, ocean or waterway. Oceanic debris tends to accumulate at the centre of gyres and on coastlines, frequently washing aground, when it is known as beach litter or...
, and vice versa. These currents also affect temperatures throughout the world. For example, the current that brings warm water up the north Atlantic to northwest Europe stops ice from forming by the shores, which would block ships from entering and exiting ports.

The OSCAR near-realtime global ocean circulation data set is based on NOAA and NASA
NASA
The National Aeronautics and Space Administration is the agency of the United States government that is responsible for the nation's civilian space program and for aeronautics and aerospace research...
satellite data (sea level altimetry, surface vector winds, and SST). The data set extends from 1993-present and is available at 1-degree and 1/3-degree resolution. The OSCAR data are continuously updated on an interactive website from which users can create customized graphics and download the data. A section of the website provides validation studies in the form of graphics comparing OSCAR data with moored buoys and global drifters.

OSCAR data are used extensively in climate studies. Monthly maps and anomalies have been published in the monthly Climate Diagnostic Bulletin since 2001, and are used routinely to monitor ENSO and to test prediction models. OSCAR currents are routinely used to evaluate the surface currents in Global Circulation Models (GCMs), for example in NCEP Global Ocean Data Assimilation System (GODAS) and European Centre for Medium-Range Weather Forecasts (ECMWF). Data and relevant publications and references are available on the OSCAR website.