Encyclopedia
Dyrehavsbakken commonly referred to as Bakken ("The Hill"), is the world's oldest operating amusement park
Amusement park
thumb|Cinderella Castle in [[Magic Kingdom]], [[Disney World]]Amusement and theme parks are terms for a group of entertainment attractions and rides and other events in a location for the enjoyment of large numbers of people...
. It is located near Klampenborg (Gentofte municipality
Gentofte
Gentofte Kommune is a municipality in the Capital Region of Denmark on the east coast of the island of Zealand in eastern Denmark. The municipality covers an area of , and has a total population of 68,913...
) but belongs under Lyngby-Taarbæk Kommune, Denmark
Denmark
Denmark is a Scandinavian country in Northern Europe. The countries of Denmark and Greenland, as well as the Faroe Islands, constitute the Kingdom of Denmark . It is the southernmost of the Nordic countries, southwest of Sweden and south of Norway, and bordered to the south by Germany. Denmark...
about 10 km north of Copenhagen
Copenhagen
Copenhagen is the capital and largest city of Denmark, with an urban population of 1,199,224 and a metropolitan population of 1,930,260 . With the completion of the transnational Øresund Bridge in 2000, Copenhagen has become the centre of the increasingly integrating Øresund Region...
. With 2.5-2.7 million visitors per year, it is the second most popular attraction in Denmark, after the more widely known amusement park Tivoli Gardens. 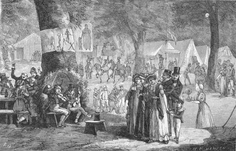 The origins of Dyrehavsbakken can be traced back to 1583 when Kirsten Piil discovered a natural spring in what is now known as Jægersborg Dyrehave
Jægersborg Dyrehave
Dyrehaven , officially Jægersborg Dyrehave, is a forest park north of Copenhagen. It covers around 11 square kilometres...
or Dyrehaven, a large forest park north of Copenhagen
Copenhagen
Copenhagen is the capital and largest city of Denmark, with an urban population of 1,199,224 and a metropolitan population of 1,930,260 . With the completion of the transnational Øresund Bridge in 2000, Copenhagen has become the centre of the increasingly integrating Øresund Region...
. Residents of Copenhagen were attracted to the spring due to the poor water quality in the area during the time period. Many believed the natural spring water to have curative properties, and therefore Piil's discovery drew large crowds, especially in the springtime. These large crowds attracted entertainers and hawkers, whose presence began the origins of amusement parks as are presently known.

Open to the general public once again, Dyrehavsbakken began to flourish. The entertainers, hawkers, and innkeepers returned to the area, and Bakken's growing reputation throughout Europe attracted other entertainers and artists, including Pjerrot
Pierrot
Pierrot is a stock character of pantomime and Commedia dell'Arte whose origins are in the late 17th-century Italian troupe of players performing in Paris and known as the Comédie-Italienne; the name is a hypocorism of Pierre , via the suffix -ot. His character in postmodern popular culture—in...
, the clown that is still a fixture at the park today. Bakken continued to grow even throughout the Napoleonic Wars
Napoleonic Wars
The Napoleonic Wars were a series of wars declared against Napoleon's French Empire by opposing coalitions that ran from 1803 to 1815. As a continuation of the wars sparked by the French Revolution of 1789, they revolutionised European armies and played out on an unprecedented scale, mainly due to...
, aided by easier accessibility due to the development of railroads and steamships as well as good publicity from poets and authors.

As the popularity of Bakken grew, its conditions worsened. As a result, some of the business owners, or "tent owners" as they are still called today, created the Dyrehavsbakken Tent Owners’ Association of 1885. The association improved garbage collection, restroom facilities, water supply, publicity, and helped bring electricity to the park. The association is still around today, and all businesses operating in the park are required to join. 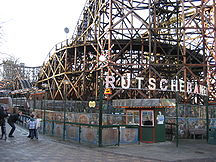 The following table gives information on the roller coasters currently at Bakken.

Bakken contains many other entertainment options in addition to rides. This includes carnival
Carnival
Carnaval is a festive season which occurs immediately before Lent; the main events are usually during February. Carnaval typically involves a public celebration or parade combining some elements of a circus, mask and public street party...
-style games, slot machines, and dancing. The park's mascot, Pjerrot the clown, performs everyday for young children. The park is also home to Bakkens Hvile music hall, where cabarets are common, as well as the Circus Revue, a live circus
Circus
A circus is commonly a travelling company of performers that may include clowns, acrobats, trained animals, trapeze acts, musicians, hoopers, tightrope walkers, jugglers, unicyclists and other stunt-oriented artists...
-style performance. There are also live music performances in lounges and bars across the park on a regular basis.

The park is home to dozens of restaurants of all tastes and price ranges. The style of restaurants range from standard amusement park street food
Street food
Street food is ready-to-eat food or drink sold in a street or other public place, such as a market or fair, by a hawker or vendor, often from a portable stall. While some street foods are regional, many are not, having spread beyond their region of origin. Most street food are both finger and fast...
vendors, to buffets, to fancier wine-and-dine restaurants. The type of food represented ranges from standard amusement park fare, such as hamburgers and cotton candy
Cotton candy
Cotton candy , candy floss or candyfloss or candy buttox , or fairy floss is a form of spun sugar. Since cotton candy is mostly air, a small initial quantity of sugar generates a tremendously greater final volume, causing servings to be physically large and voluminous...
, to tradition Danish cuisine, such as Pølser
Pølser
Rød Pølse is a type of boiled sausage very common in Denmark and Norway. Since hot dog stands are ubiquitous in Denmark some people regard røde pølser as one of the national dishes. Their most noticeable aspect is that the skin often contains a traditional red dye making it bright red...
(Danish hot dogs), Æbleskiver
Æbleskiver
Æbleskiver are traditional Danish pancakes in a distinctive shape of a sphere. Somewhat similar in texture to American pancakes crossed with a popover, æbleskiver are solid like a pancake but light and fluffy like a popover...
(Danish pancakes), and Smørrebrød
Smørrebrød
Smørrebrød usually consists of a piece of buttered rye bread , a dense, dark brown bread. Pålæg , the topping, then among others can refer to commercial or homemade cold cuts, pieces of meat or fish, cheese or spreads...
(open-faced sandwiches), to many other types of international cuisine. Bakken also contains numerous bars and lounges, where popular Danish beer
Beer
Beer is the world's most widely consumed andprobably oldest alcoholic beverage; it is the third most popular drink overall, after water and tea. It is produced by the brewing and fermentation of sugars, mainly derived from malted cereal grains, most commonly malted barley and malted wheat...
such as Carlsberg and Tuborg are served.

Bakken is open daily from the end of March through the end of August. Entrance into the park area is free, but rides and attractions require money. Price depends on the ride or attraction. Discounted coupons, wristbands, and season passes can also be purchased.