Encyclopedia
The Dunlin, Calidris alpina, is a small wader
Wader
Waders, called shorebirds in North America , are members of the order Charadriiformes, excluding the more marine web-footed seabird groups. The latter are the skuas , gulls , terns , skimmers , and auks...
, sometimes separated with the other "stint
Stint
A stint is one of several very small waders in the paraphyletic "Calidris" assemblage - often separated in Erolia -, which in North America are known as peeps...
s" in Erolia. It is a circumpolar breeder in Arctic
Arctic
The Arctic is a region located at the northern-most part of the Earth. The Arctic consists of the Arctic Ocean and parts of Canada, Russia, Greenland, the United States, Norway, Sweden, Finland, and Iceland. The Arctic region consists of a vast, ice-covered ocean, surrounded by treeless permafrost...
or subarctic regions. Birds that breed in northern Europe
Northern Europe
Northern Europe is the northern part or region of Europe. Northern Europe typically refers to the seven countries in the northern part of the European subcontinent which includes Denmark, Estonia, Latvia, Lithuania, Norway, Finland and Sweden...
and Asia
Asia
Asia is the world's largest and most populous continent, located primarily in the eastern and northern hemispheres. It covers 8.7% of the Earth's total surface area and with approximately 3.879 billion people, it hosts 60% of the world's current human population...
are long-distance migrants
Bird migration
Bird migration is the regular seasonal journey undertaken by many species of birds. Bird movements include those made in response to changes in food availability, habitat or weather. Sometimes, journeys are not termed "true migration" because they are irregular or in only one direction...
, wintering south to Africa
Africa
Africa is the world's second largest and second most populous continent, after Asia. At about 30.2 million km² including adjacent islands, it covers 6% of the Earth's total surface area and 20.4% of the total land area...
, southeast Asia
Southeast Asia
Southeast Asia, South-East Asia, South East Asia or Southeastern Asia is a subregion of Asia, consisting of the countries that are geographically south of China, east of India, west of New Guinea and north of Australia. The region lies on the intersection of geological plates, with heavy seismic...
and the Middle East. Birds that breed in Alaska
Alaska
Alaska is the largest state in the United States by area. It is situated in the northwest extremity of the North American continent, with Canada to the east, the Arctic Ocean to the north, and the Pacific Ocean to the west and south, with Russia further west across the Bering Strait...
and the Canadian
Canada
Canada is a North American country consisting of ten provinces and three territories. Located in the northern part of the continent, it extends from the Atlantic Ocean in the east to the Pacific Ocean in the west, and northward into the Arctic Ocean...
Arctic migrate short distances to the Pacific
Pacific Ocean
The Pacific Ocean is the largest of the Earth's oceanic divisions. It extends from the Arctic in the north to the Southern Ocean in the south, bounded by Asia and Australia in the west, and the Americas in the east.At 165.2 million square kilometres in area, this largest division of the World...
and Atlantic
Atlantic Ocean
The Atlantic Ocean is the second-largest of the world's oceanic divisions. With a total area of about , it covers approximately 20% of the Earth's surface and about 26% of its water surface area...
coasts of North America
North America
North America is a continent wholly within the Northern Hemisphere and almost wholly within the Western Hemisphere. It is also considered a northern subcontinent of the Americas...
, although those nesting in Northern Alaska overwinter in Asia.

The Dunlin is highly gregarious in winter, sometimes forming large flocks on coastal mudflats or sandy beaches. Large numbers can often be seen swirling in synchronized flight on stop-overs during migration or on their winter habitat.

This bird is one of the most common and best-known waders throughout its breeding and wintering ranges, and it is the species with which other waders tend to be compared. At 17–21 cm length and a 32–36 cm wingspan
Wingspan
The wingspan of an airplane or a bird, is the distance from one wingtip to the other wingtip. For example, the Boeing 777 has a wingspan of about ; and a Wandering Albatross caught in 1965 had a wingspan of , the official record for a living bird.The term wingspan, more technically extent, is...
, it is similar in size to a Common Starling, but stouter, with a thick bill.

The Dunlin moves along the coastal mudflat beaches it prefers with a characteristic "sewing machine" feeding action, methodically picking small food items. Insect
Insect
Insects are a class of living creatures within the arthropods that have a chitinous exoskeleton, a three-part body , three pairs of jointed legs, compound eyes, and two antennae...
s form the main part of the Dunlin's diet on the nesting grounds; it eats mollusks, worm
Worm
The term worm refers to an obsolete taxon used by Carolus Linnaeus and Jean-Baptiste Lamarck for all non-arthropod invertebrate animals, and stems from the Old English word wyrm. Currently it is used to describe many different distantly-related animals that typically have a long cylindrical...
s and crustacean
Crustacean
Crustaceans form a very large group of arthropods, usually treated as a subphylum, which includes such familiar animals as crabs, lobsters, crayfish, shrimp, krill and barnacles. The 50,000 described species range in size from Stygotantulus stocki at , to the Japanese spider crab with a leg span...
s in coastal areas. 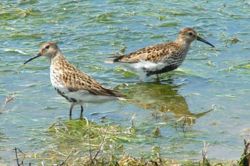 An adult Dunlin in breeding plumage shows the distinctive black belly which no other similar-sized wader possesses. The winter Dunlin is basically grey above and white below. Juveniles are brown above with two whitish "V" shapes on the back. They usually have black marks on the flanks or belly and show a strong white wingbar in flight

The legs and slightly decurved bill are black. There are a number of subspecies
Subspecies
Subspecies in biological classification, is either a taxonomic rank subordinate to species, ora taxonomic unit in that rank . A subspecies cannot be recognized in isolation: a species will either be recognized as having no subspecies at all or two or more, never just one...
differing mainly in the extent of rufous coloration in the breeding plumage and the bill length. It should, however, be noted that bill length varies between sexes, the females having longer bills than the males.

The nest is a shallow scrape on the ground lined with vegetation, into which typically four eggs are laid and incubated
Avian incubation
Incubation refers to the process by which certain oviparous animals hatch their eggs, and to the development of the embryo within the egg. The most vital factor of incubation is the constant temperature required for its development over a specific period. Especially in domestic fowl, the act of...
by the male and female parents. Chicks are precocial, however are brooded during early development. They start to fly at approximately three weeks of age. The majority of brood care is provided by the male, as the female deserts the brood and often leaves the breeding area.

The call is a typical sandpiper "peep", and the display song a harsh trill.

Apparent hybrids between this species and the White-rumped Sandpiper
White-rumped Sandpiper
The White-rumped Sandpiper is a small shorebird.Adults have black legs and a small thin dark bill. The body is dark brown on top and mainly white underneath, with brown streaks on the breast and a white rump. They have a white stripe over their eyes. This bird shows long wings in flight. In winter...
as well as with the Purple Sandpiper
Purple Sandpiper
The Purple Sandpiper, Calidris, Arquatella or Erolia maritima is a small shorebird.Adults have short yellow legs and a medium thin dark bill with a yellow base. The body is dark on top with a slight purplish gloss and mainly white underneath. The breast is smeared with grey and the rump is black...
have been reported from the Atlantic coasts of North America (McLaughlin & Wormington, 2000, and external link below) and Europe
Europe
Europe is, by convention, one of the world's seven continents. Comprising the westernmost peninsula of Eurasia, Europe is generally 'divided' from Asia to its east by the watershed divides of the Ural and Caucasus Mountains, the Ural River, the Caspian and Black Seas, and the waterways connecting...
(Millington, 1994), respectively.