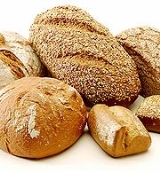 What is effect of lactic acid bacteria on bread?
More
x